The story of a ladybird...

Yesterday I saw a image shared of ladybirds... and shared it to my page... as I thought it was a great way to learn more about the diversity of nature... a way to identify the many kinds of ladybirds.

As a child I had inherited my mother's fear of insects... by observing her behaviour and mirroring it... Imade the decision as a mother to hide my fear of insects from my children so that they could develop their own relationship with creepy crawlies... I am happy to say both daughters and my son are pretty much fearless when it comes to insects... they are things of interest.

I do remember as a child, though, that ladybirds (or ladybugs) were one of the very few insects that I would want to hold or have crawl on me (that and the teeny tiny money spiders). So for me (and I see it in preschoolers today as well) ladybirds are a way into the insect world...

Just as an interesting side note... in Swedish they are called "nyckelpiga" which direct translated means key-maid. I mean I have always wanted to know what they hold the key to - but I will keep on topic..

here is the image... 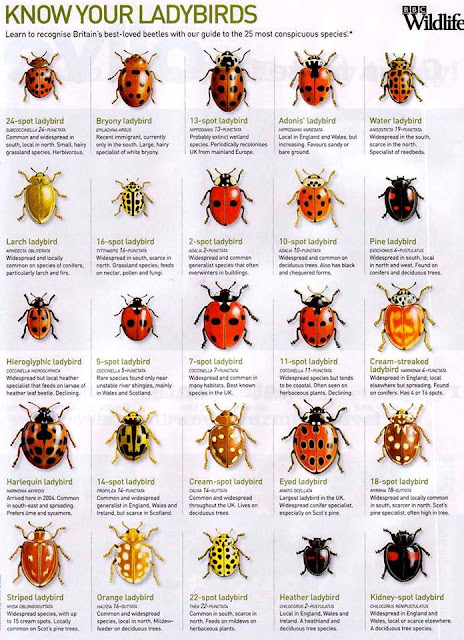 and if you would like more information you can check  here (the BBC wildlife) and here - national geographic for kids and here - UK ladybird spotter  and here... ladybird directly translated into English from various languages and here - ladybug identfier

What I would do with the above image is print it out, cut it into individual insect cards - to make it more manageable to select from, and also more handy to put into a pocket when I am going out. I would also laminate the individual cards so that I could take them out in all weathers.

I would probably print out two sets... more to share... and also it would allow me to play memory with the children... I could select 5 ladybirds at first - making them very different from each other to ease the process in the beginning...

If there developed a big interest in ladybirds I would share some of the facts that I had learned through reading the texts with the children...

I would also look for ladybird storybooks to read with the children...
like this online story about a yellow ladybird feeling different from the others.. or this traditional rhyme which can be an interesting rhyme to explore with children... what DOES it mean?
or this film version of the grouchy ladybug by Eric Carle. (called the Bad-tempered Ladybird in British English) - there is also what the ladybird heard by Julia Donaldson - or songs like this or this... which reminds me of a Swedish rhyme about ladybirds  or this finger rhyme

I might provide different coloured play-doh that connected to the colours of the ladybirds we had observed... and provide small black stones/button/beads for the children to create their own ladybirds - of course they would be free to make their own play-doh creations too...

maybe some stone painting to turn them into ladybirds,
or simple painting with just red and black one time... or yellow and black another... not with the aim to create  ladybirds... but just to express themselves through that medium. Would they be inspired by the ladybird colours in any specific way after all their ladybird explorations?


Maybe make art with buttons... selecting  the colours of ladybirds that we have observed.

But mostly for me the excitement is getting outside and discovering nature... and having the resources to be able to answer the children about what we discover... by knowing or showing the resources to find out together.
I also like the fact that there is such diversity... they are all ladybirds... and yet they are all different... yet we value them equally as ladybirds... some are not more a ladybird than other (this is why I like to sort my what is their favourite and asking them why... I could then go on to ask about how they might think the ones they are not so keen on might feel etc... it is a start of a dialogue at least)

Many make judgements about how people look... and this is a way of addressing that in a safe way... to get the children thinking about diversity, about the norm and things/people/ideas outside of the norm - and how we value all of these.

sure you can do ladybird math by making ladybird picture and counting spots on them... but I prefer to do that in nature as we explore and as a natural part of the identifying process.

Ladybird and other insects came up a lot for us during the International Fairy Tea Party too... in part because the children were looking for small things and also as part of the curiosity in things with wings (like fairies)