Exploring the colour of Christmas

For the third year in a row I have asked the same philosophy question to this group of children I have been working with for three years...

What colour is Christmas?

Six colours were discussed... and the group needed to work and discuss together to work out which three colours we would use in our Christmas painting.

Yes, we could use more colours, but the purpose of this activity is to get the children to work as a community of learners, to give argument, to listen and to decide together which three colours were the most Christmassy.

This year the children selected red (baubles, santa) green (Christmas trees) and gold (baubles) as the three colours for our Christmas artwork.

As usual the process art was about collaboration rather than individual works of art... a pole with a paintbrush dangling froma string was given to pairs of children. They stood on either side of the big paper on the floor and worked together to dip the brush into the paint and make marks on the paper... not so easy... and there was lots of giggling.

Some of the children had clear agendas, they used their verbal skills to communicate to their partner, others just jerked the pole here and there and hoped their partner would follow, and others just followed. 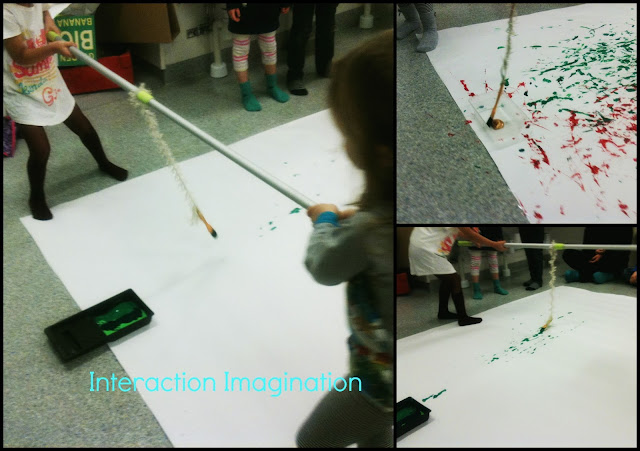 Its been interesting to watch the children's development over the years, and I feel quite sad, and excited, that this will be my last Christmas session with these children... as they will all start school after summer...
Posted by Suzanne Axelsson - Interaction Imagination at 21:12 No comments:

The children have got a real interest in robots at the moment... as our Leonardo Da Vinci project has taken us there... and yes, he did design and build a robot in 1495, and this is what has inspired the children the most.

We have had dialogues about what kind of robots they would design and why, - they decided upon a robot that could do everything was the best... and then they were not so sure... maybe it would start playing the i-pad for them... and they were not keen on that idea at all.

After the half term break I thought I would try a new way of collecting the question for the philosophy session... by taking something the children asked about the day before with the group's consent that this would be a good question to explore.

The question was do princes have to marry a princess? They all showed great enthusiasm for the question as we chose it... but the next day during our philosophy session it simply did not work. The children had no real interest in exploring this question.

It had me baffled... the previous philosophy session had been amazing and the children were dialoging on quite a deep level with very little input from me... just as it should be.

But I had to be SO present, too present, in this dialogue, trying to ignite and re-ignit interest... and in the end I had to admit it simply was not going to work.

As I analysed the dialogue, the context, the question I found three possible answers...
After a week of me being away they were revolting!
It was a two week break since the last session, had they fallen out of a routine?
Was the question not meaningful enough?

After much reflection and dialogue with my colleague we came to the conclusion that it was the third option... the question HAD been interesting the day before. They were curious about the answer but its a different kind of curiousity than what is needed for a philosophical dialogue. And that despite the fact that sometimes I feel that I am making the decisions about what questions are being asked to stimulate the session they are being made after close observations of the children's play and their interests... I have learned what is meaningful for them and ensure that questions I ask are relevant to their thinking.

It means I will be taking control of the questions again... but always, ALWAYS, the questions comes from the children... the roots are there.

Anyway, we returned to robots again, as I knew they had real interest in this...
We looked at various kinds of robots... and while looking at a film of a robot that was sent to Mars to take images and samples and was then left there, the children felt sorry for the robot. It might feel lonely.
So we started exploring whether or not robots could have feelings.
The group was undecided.
So we explored where do feelings come from... the brain answered all the children... except for love, that comes from the heart.
Do robots have brains and hearts?
We did not know.
We needed more knowledge... so we have started to build a small robot spider... maybe there are some answers to be found as we construct...? 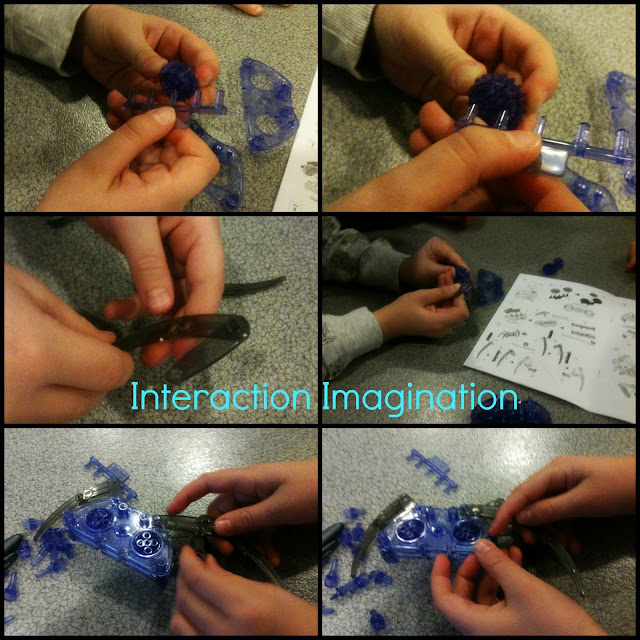 This robot that we are building is very simple (but the first robot I have ever built... so I am learning with the children - and the kits talks about red, blue and white wires... and there are only red and black... so I am going to have to experiment a bit with the children I think with the mext step hahaha).

I have seen that one of the legs has been put on upside down... but made the choice not to make a comment about it, or correct it... so that the children can discover the mistake once we have the motor attached.

I wonder if the children see if there is a brain and a heart... and what parts they think might be those..

Iwonder if it will give the children enough information to decide together their truth as to whether robots have feelings or not.

Next week we will be doing philosophy a little different. We will be watching Big Hero6 in 4 short sessions and chatting about the film afterwards... what has heppened and why they think that has happened.

We did this with Frost last year, and I found it quite surprising how many of the children were not totally familiar with the plot despite being able to sing the songs and quote parts of the film word for word.

Posted by Suzanne Axelsson - Interaction Imagination at 22:21 No comments: