This is some background information for the keynote talk I held at Durham Early Years Festival on 19th June 2015. This is to enable MY journey to be talked about during my time talk time without compromising on refernces and where to go further if you are interested in finding out more... 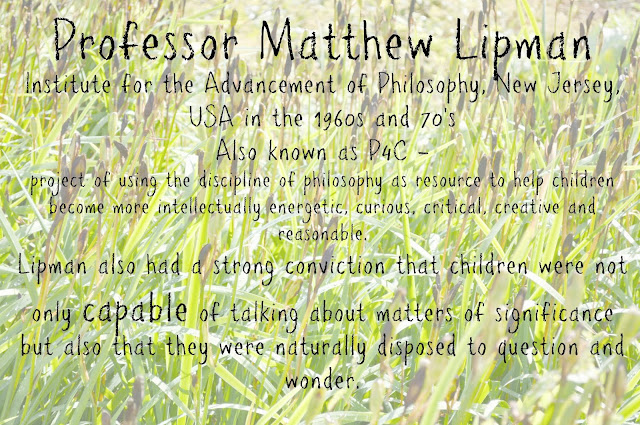 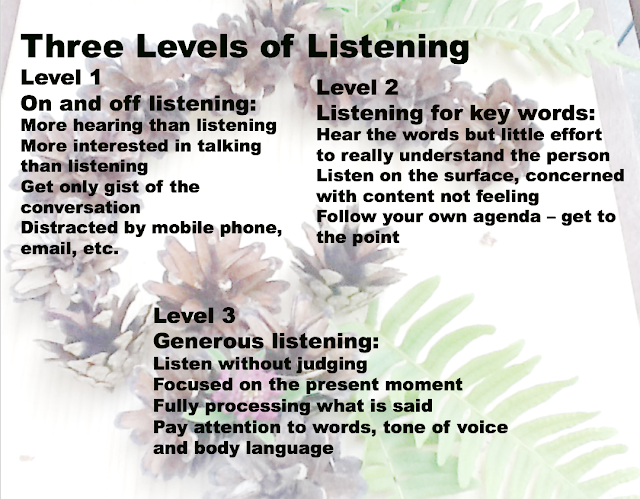 Listening - 7 inspiring TEDtalks  - here I have linked some talks that can really inspire you. 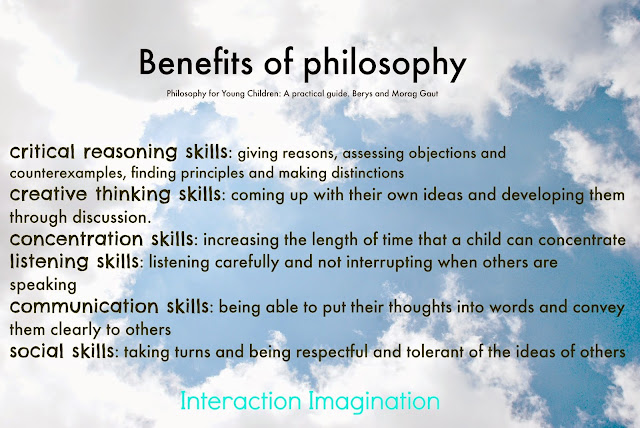 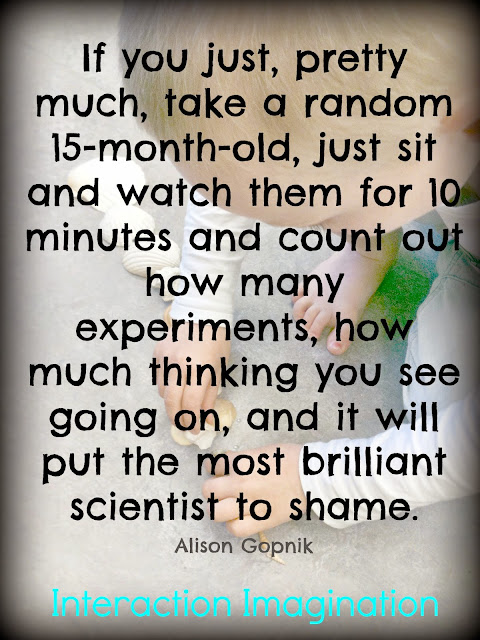 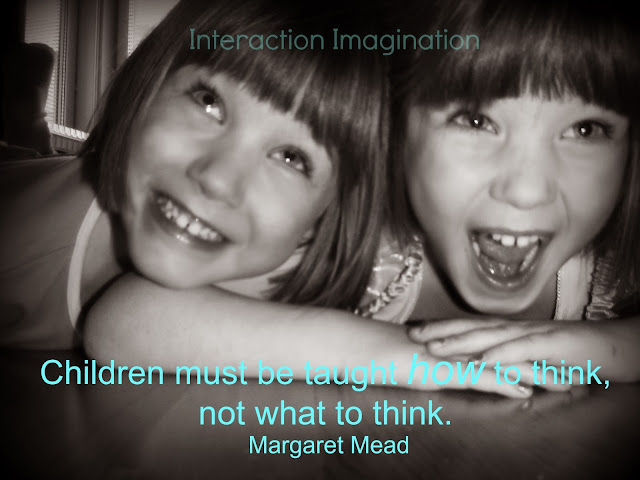 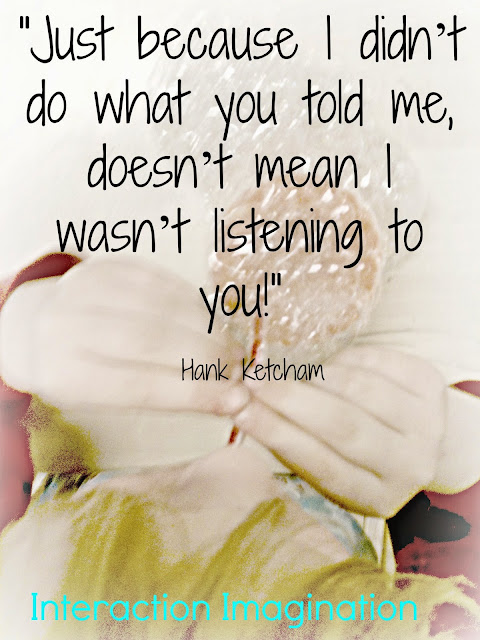 Other sites worth checking out...
Peter Worley - Philosophy Foundation
Teaching Children Philosophy - Wartenberg - this link you can find lots of story books with suggested questions and ideas of how to explore them - check "Book Modules" and you will see a list of titles...

The best position for listening - a post about the session where we drew how to sit in order to listen well.

The Importance of the Spoken language - listening with pre-verbal children

Listening with eyes - another way to play and increase listening skills

Listening, art and testing boundaries - another post about an art session that was more about supporting the children's listening skills than the actual art...

Of course please take the time to explore my bog... to find inspiration of one kind or anohter.... and even better, leave comments.... to get me thinking, to inspire future posts...

Thank you for listening

Posted by Suzanne Axelsson - Interaction Imagination at 11:35 No comments:

Email ThisBlogThis!Share to TwitterShare to FacebookShare to Pinterest
Labels: listening

the bad the good and the barbies...

When I became the parent of identical girls I had many thoughts about how I was going to be a good mother...
Buying Barbies for my daughters was not on my good mother list. Instead I bought completely different dolls for my girls (that were horrendously expensive, as were all the extra clothes and accessories) - but these dolls had the bodies of children isntead... perfect, I thought, for their role-play together.
At the age of three my aunt bought them a barbie each for Christmas... the expensive dolls were dumped in a corner... it was ALL about barbie now...

I quickly learned that being a good mother was not about enforcing my thoughts upon my children about what is right and wrong... but giving my children the possibility to make their own informed decisions. My children allowed me to see barbie with a new perspective... not this view so many adults have of an adult with an unrealistic form - but as an open ended toy with limitless abilities... a toy that represented an adult, unlike the expensive dolls... this meant a toy that had more power in their eyes... but also a toy that could fly, that could swim, that could work, go to parties, change outfits, wear BIG long dresses, like nothing they had seen in real life... they were fairies, mermaids, teachers, researchers, adventurers...

When I ask my girls now (14) about their memories of barbie they remember it was fun because you could move their legs, you could change their clothes and they could pretend many things.... 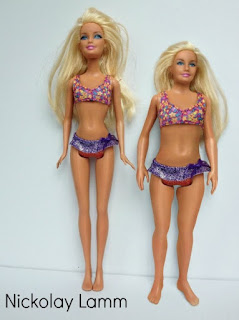 Of course barbie could have a completely different look and still be able to move her legs and have a variety of clothes... but as a mother of barbie playing children I felt that it was MY responsibility to give my daughters the strength to feel proud of who they are, how they look and what they want to be... the barbies have not been responsible for my children's self esteem... I HAVE been a huge part of that. I have made a conscious decision to have a healthy view of my own body (especially in front of my children) and I also made the decision not to diet... as child I remember my mother ALWAYS being on a diet - and always being dissatisfied with her body image... she DID NOT play with barbies as a child - they did not even exist until my mother was 12 - my mother had left school at the age of 14 and went to secretarial college, met my father at 15 and was married at 19 (that just made me shudder a little when I think of my daughters and realise how close to adulthood they are).
What are my mother's issues with body image to be blamed on then? if Barbie is the root of all evil when it comes to modern childhood's body image? Especially when neither myself or my daughters have  issues with our bodies (and yes we can have our days of insecurities like all people, but there is that feeling of being content with the body we have).

But maybe not all children have access to a parent that is going to get them thinking criticially about the toys they have.... er wait a minute, neither did I....
But that aside, if we, as a society, think that barbie, and similar toys/images, are damaging to children then what are we doing about this as parents and as teachers...

As teachers we could bring in the barbies and the princess culture into the preschools and schools... LISTEN to the children about WHAT EXACTLY it is that interests them about the barbies and the princesses and then explore that... in the same way you would with super heroes... why are super heroes more acceptable than barbies and disney princesses...? they are also a similar kind of stereotype... do all boys feel the pressure that they must have muscles and wear tights? Do boys feel that have to wear masks as an adult, do they go round thinking they have to always protect ?- and just as there are more princesses than princes, there are more male super heroes than female ones... especially in the merchandising.

My family are totally into Marvel - the girls as much as my son... maybe more so ... OK so I suspect hormones might have something to do with that too? ;-)

But my question is... if we are to increase the rights of girls to have equal status of boys... then why are we saying what they like is bad?
What are we saying to girls when we say... the barbies you like and think are beautiful, we think are bad... does that mean we are saying the girls are wrong? Are we giving children the message with ADULT values, that their childlike view of the play toy is wrong?

I have learned many things by listening to children.... and I mean listening to THEIR perspective, not what I think is a child perspective (you can check out my post where I talk about the difference between child perspective and child's perspective - here) - and I have learned that children really view things in completely different ways from us adults... so that when we are adding our adult values to certain toys we are weighing down children's play... especially if we are not allowing children time to explore this extra weight and make their own decision about whether or not this is relevant or not for them - and whether they can peel that weight off and to continue playing with the toy in the way that THAT see it... and hopefully allow us as adults to see it with fresh eyes too. 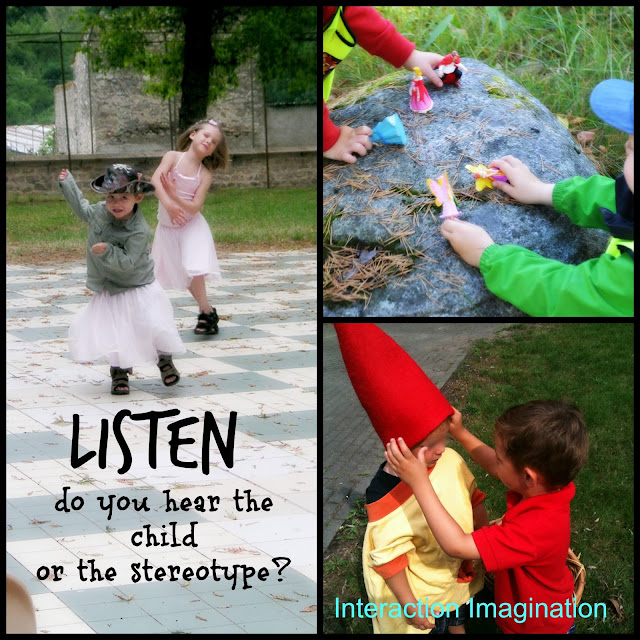 In all of this writing, I am not saying that I LIKE barbies or disney princesses, or ninja turtles or super heroes as toys or as books  but I am not going to weigh down the children with MY values... I want to listen and understand THEIR values... and all the time  I am working on building their self esteem and their critical thinking so that they are able to make their own decisions and feel happy about them and themselves. I want to enable the children to make informed decsions... and that means seeignt hing froma variety of perspectives... philosophical dialogues really help with that

If I can reach the children and support their learning through barbies, or Frozen or Ninja Turtles... then I will do that... but what I have found is that there is often an element of these characters that the children are interested in... and we have been able to explore through that... for instance last year we explored magic powers as the group went Frozen crazy. But I will never just focus one one thing... I will offer the children a great variety of options to explore it from many perspectives and also to explore alternative play...

We actually watched the film Frozen at preschool in four sections... after each section we talked about what we had just seen and recreated the story.... so many of the children knew parts of the story but did not know the whole, or understand the message of the film... by exploring the film at preschool we were able to support the children's comprehension of a film many of them had seen a enormous number of times... thus giving the children the power to make their own decsions about what they felt about Elsa, Sven, Hans, Anna, Olaf etc etc - and even with this knowledge of the great power of Anna... the children just wanted magic... and Elsa had that, as well as a dress that magically changed... the boys also wanted Elsa powers and identified more with Elsa than they did with Hans or Sven... although they did quite enjoy being guards and having the power of locking up Elsa... (but there are girls that played that role too).

So what am I saying in all of this?

I reckon I am saying that we need to believe in the competence of children... that they know that these figures are not realistic - like during our philosophical dialogues about fairies, when I asked the children if fairies were real.... "They are real, pretend real"... children have a power of imagination that many, most, adults have lost, making it impossible for the adults to see anything more than an impossible form of barbies...

as for disney princesses... shouldn't we be elevating their status instead of sinking it further? Why can't princesses be powerful, why does pretty have to be bad? Why does pink have to stink? All of this should be empowered so that boys want to be princesses too.... so that boys want those princess dresses just as bad as the girls... I mean as a female I go round in trousers all the time, and wear skirts and dresses when I want to feel different and special (and also when I am not crawling on the floor)  - when do men get to wear skirts and dresses - or tights/leggings, without being questioned? Where are their rights to feel powerful in all kinds of clothing...?

Elevating princess power might just mean giving boys the freedom to choose too?

OK... so hopefully I have a provoked a whole load of thinking now...

Posted by Suzanne Axelsson - Interaction Imagination at 23:32 No comments: