Blogpost to support "Play, Learning and the Democratic Preschool" at Futura School 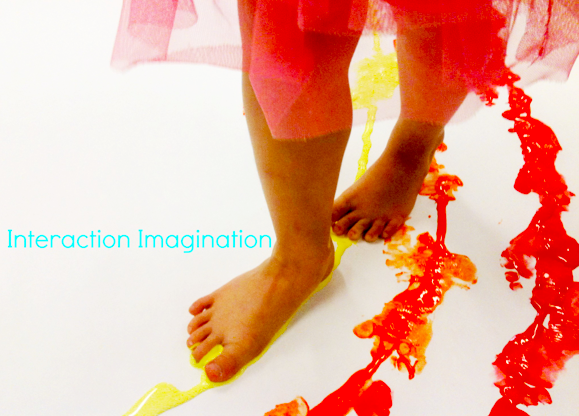 
I think this will be enough to get your reflections going... if you have any questions then please leave feedback here and I can get back to you.
Posted by Suzanne Axelsson - Interaction Imagination at 10:35 No comments:

Email ThisBlogThis!Share to TwitterShare to FacebookShare to Pinterest
Labels: democratic, documentation, Empathy, sensory, the competent child, theory/thoughts, Together on the Square Project, Together paintings

The same activity a different reaction

I have been helping out a few days a week at a local preschool...

The other week I shared a blogpost about the space project sensory play... where images were projected onto the wall (using translucent fabric to capture the images before reaching the wall and thus allowing the children to feel as is they were in space - OK with a bit of imagination!!!).
I did this with the group of children that I have been helping out with since September - I have got to know these children, we have created a relationship, they know my limits and my expectations.

I arrived at the preschool last wee and was told that I would not be working with the same group as usual, but that the parallel group wanted to  experience space in the same way. I had zero time to prepare... this will affect the outcome - I did not know the children in the same way (although the children like and trust me, which is an important start) - I did not have the memory stick with all the space images that i had downloaded in preparation - images that had been carefully selected from what I had learned from the children - what they knew, what they were interested in and images that would surprise them and offer them new areas of learning in their play. It meant I had to quickly download  some images in a space of 10 minutes that could be projected (working out the computers at the setting rather than my own computer which I am much faster at).

The activity was also at the disadvantage that we as educators had not talked with each other about how the rhythm of the morning would flow - which I believe is essential.

And finally it became clear that this was a group of children that had huge problems with listening - listening to instructions to find out what was going on, listening to each other (and therefore respecting each other's limits) and even listening to themselves of understanding what they themselves wanted... it meant they had a very short concentration span.

So despite the children coming in as small groups they all seemed to experience the space light sensory on a very individual front with minimal interaction... yes they could inspire each other to test things out, but they did not engage in social play in the same way the previous group of children had.

Of course the fact that it was all very last minute could have had a huge impact. BOTH groups have children that are in need of a support teacher being in the group to enable the social functioning of play - but in this second group there were almost half the children that did not listen to the adult or anyone else - and for me this presents a problem...

Children cannot be empowered if they are not listening - they miss out on important information, they get themselves into situations that negatively impact others and then refuse to listen to their peers when there is outrage... The whole group is not functioning optimally if there are so many that refuse to listen to other, that refuse to respect others, that are unable to see the social boundaries that allow us to interact positively with each other. They are able to see injustices against themselves but feel entitled to do the same thing to others and run off laughing.

To be honest, there needs to be a whole load of work being done before we get to this kind of play with the expectation that there will be a social play of the usual kind... the play is younger than what it should be in the sense it was side by side as the youngest children at preschool - rather than the 3-5 year olds that this involved (although these are still young children). The play was immature.
The play for children is always in the place where the children are... what I have to do as a teacher is shift where I am to support the children develop their play and to learn more form it...

This is why it is so important to get to know the children you work with... their interests, their needs... so that the play, the activities, the experiences that are being offered not only challenge them appropriately, but support their development - and also so that you as an educator know what to expect (even though children can always surprise you).

It means changing the environment to meet the need of the children - adapting activities - and changing your own perspective.
Since I started at the preschool there have been a lot of changes in the environment - a lot to do with the fact they have children that easily get over stimulated and the setting is designed like a giant corridor where parents and teachers and children have to walk through the entire preschool to get from one department to another (I really wonder what goes through a designer's head when they think this sort of preschool model design is a good idea... it is not... I have yet to meet a teacher that says this sort of design is anything but terrible - as they attempt to engage the children as others march by and disrupt on their way to going outside - not their fault, they are just being children. BUT if you are a designer and are reading this PLEASE don't make preschools where a class has to walk through another room where children are learning and playing just to get outside or inside - make corridors that go by the learning spaces instead!!!!).

I think as educators we need to start with the children, of enabling them to communicate with each other and to really listen and respect each other... because then the play and learning will happen on a deeper and richer level. It does not mean that you should not be doing fabulous experiences, it simply means you need to be aware of what the potential outcomes might be if you want the children to engage in complex play before they are ready for it... we have to learn to crawl walk before we run - it is the same with play.

Posted by Suzanne Axelsson - Interaction Imagination at 21:56 No comments:

This is a just a quick post to share some images from this week...
I am helping out some days at a local preschool on the days that I am not writing or travelling to Gävle...
The preschool has a space project happening at the moment... so the two days I was there this week I took in some of my materials for the children to experience a sensory approach to space...

The first session the children got to play with small lights, loose parts and coloured rice on a tray I brought back from Palestine (it is big with large sides, so perfect for sensory play on a small scale). The children were engrossed in the play... exploring how light went round planets from what they have already learned about space - but mostly it was about feeling the rice, experimenting with the lights and interacting with the materials... it was about filling and emptying and not so much about designing patterns... but I also think this indicates what their needs are right now... they have a hunger for sensory play. The play was peaceful, the children talked with each other, and it was enthusiastic... peaceful in the sense that they were able to sort out differences through their words (and well chosen words) rather than using their bodies...

Today I hung up two semi-transparent curtains with a small space in between so that I could project images of space onto it... going through the first then the second and then onto the wall... each layer also displaying the image projected... it gave the feel of being in space. I put a big mirror on the floor too, in order to give it a more infinite sort of feel. I would have liked the room to have been darker to get a bigger impact of being in space... so maybe waiting to do this in the afternoon would be better - as it is dark by 15:20 here in Stockholm at the moment (it will be earlier than that before long!)

The children came in groups of four to be able to explore the experience... and once they had the chance to do this they could come back and start using construction materials to create a space station... the images being caught on the materials... the shadows found themselves in outer space.

Enjoy the photos and films... 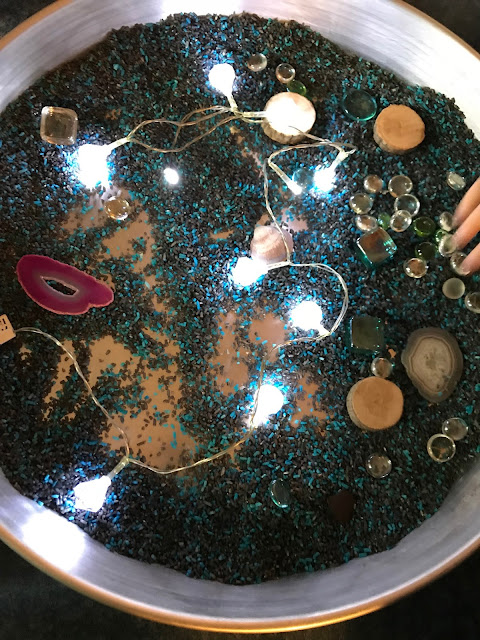 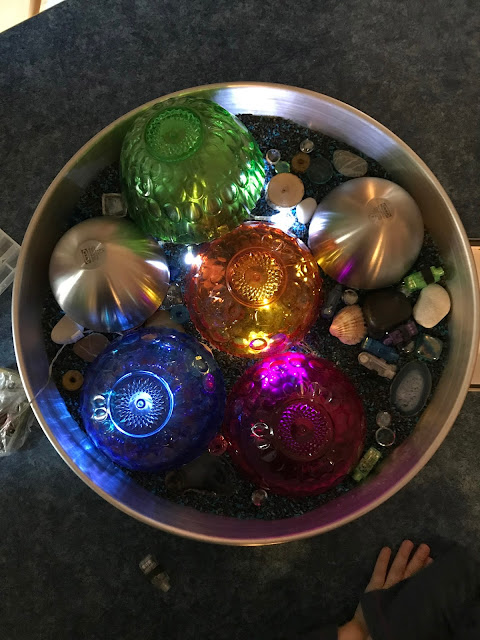 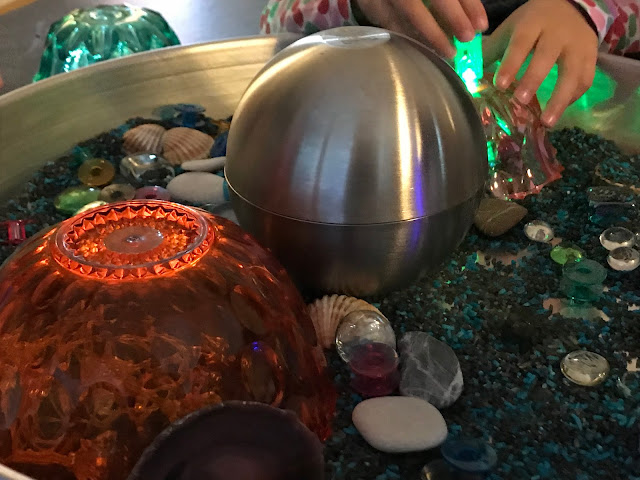 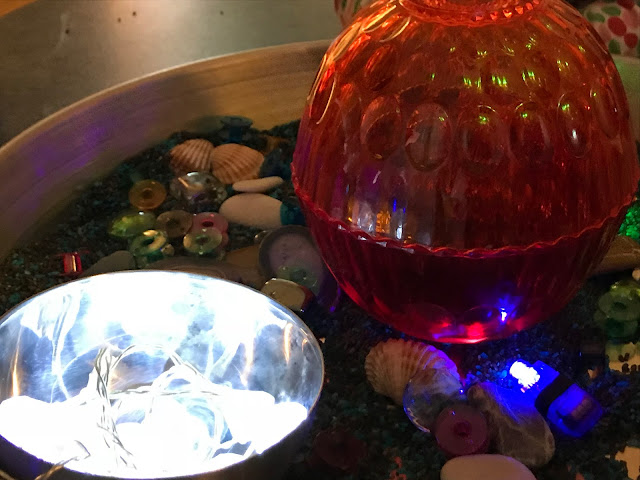 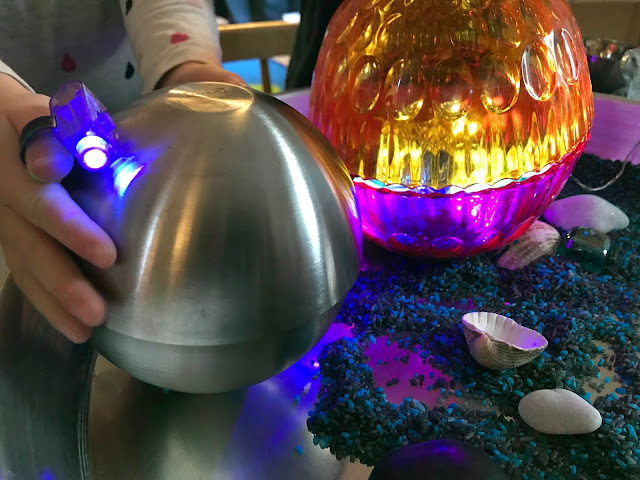 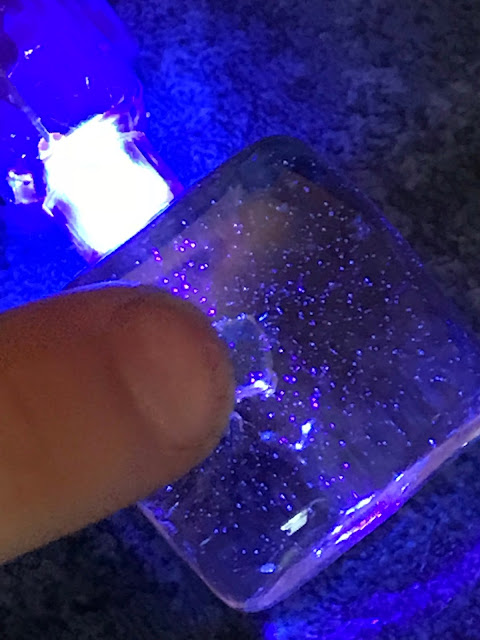 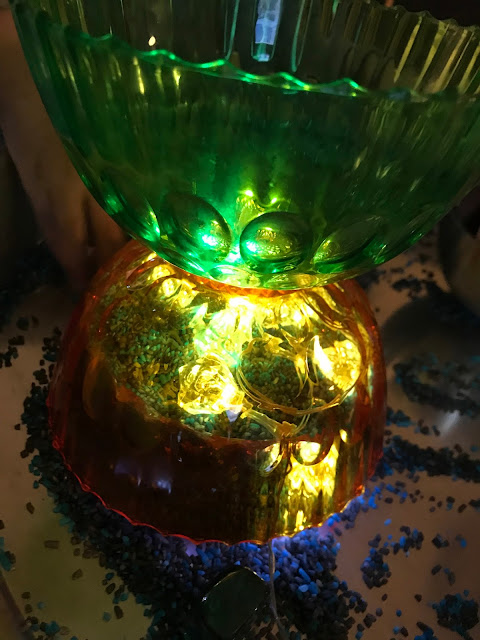 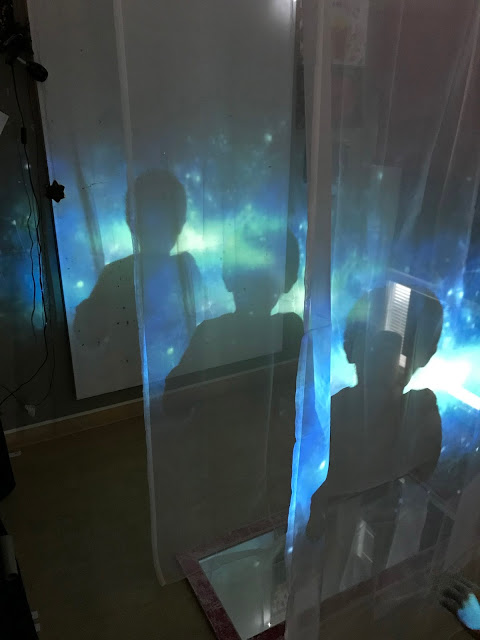 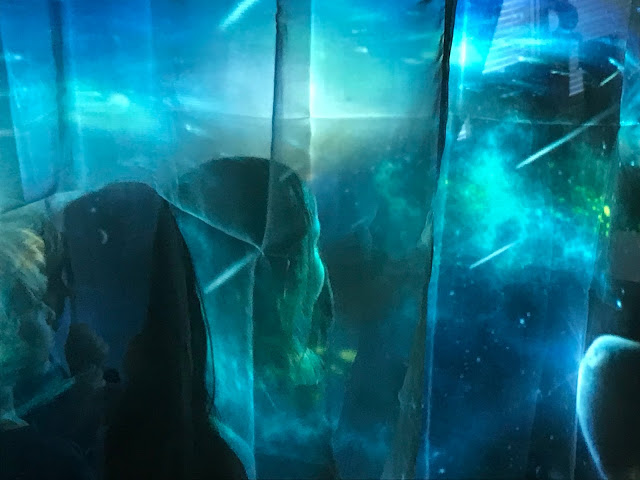 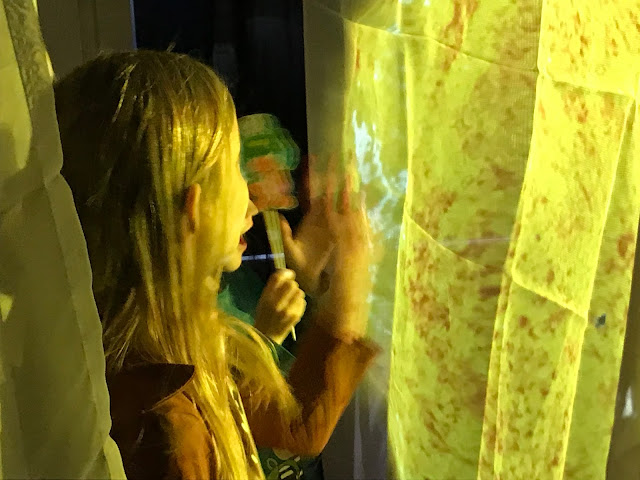 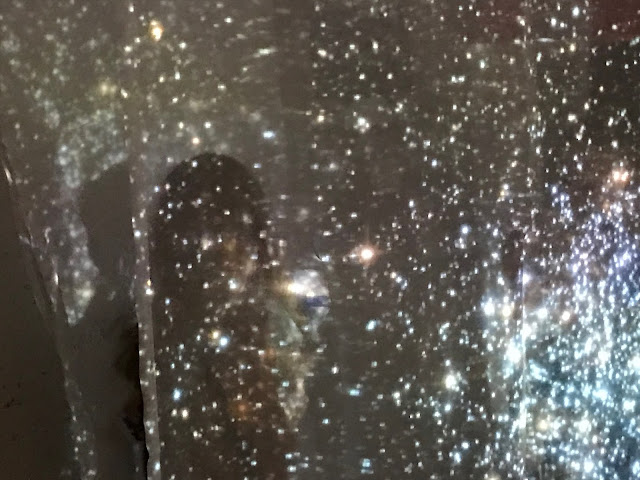 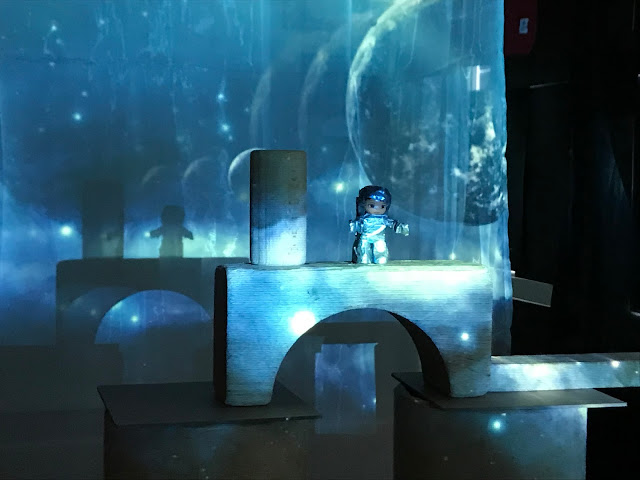 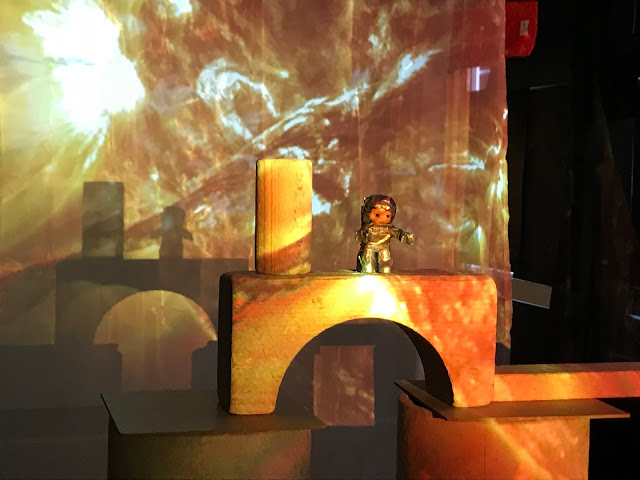 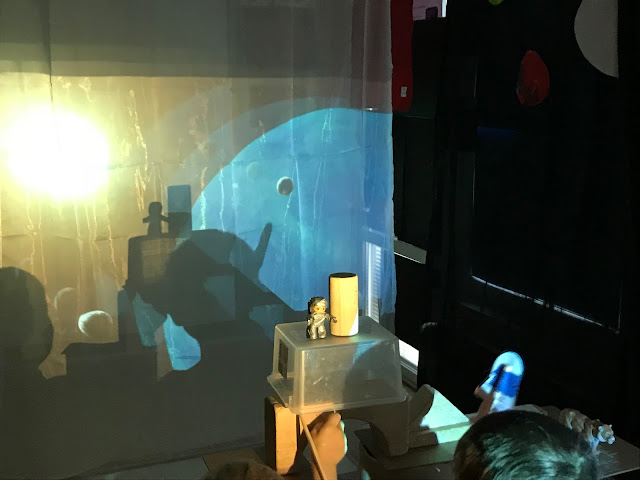 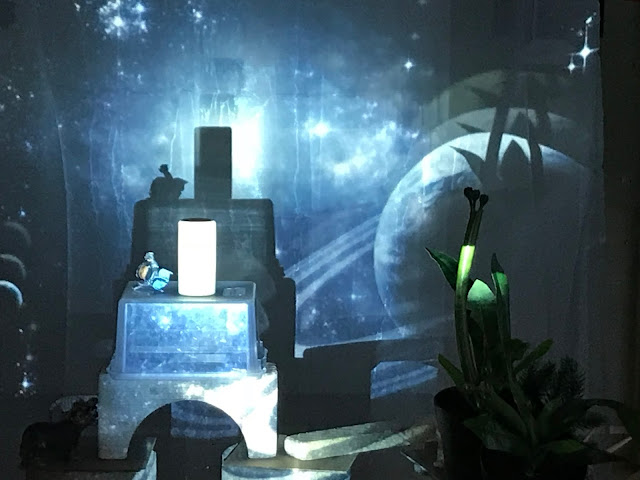 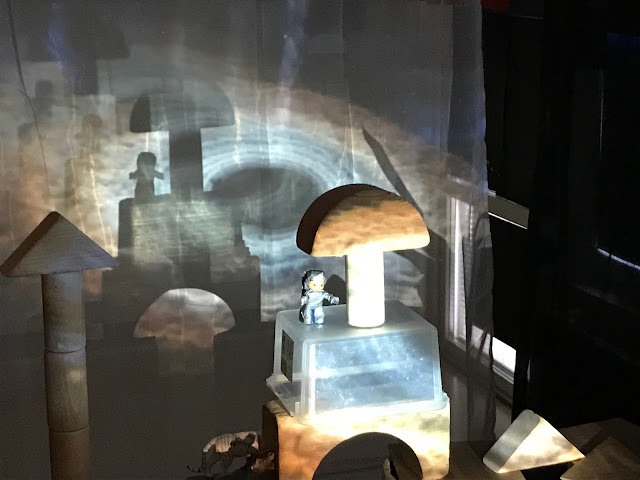 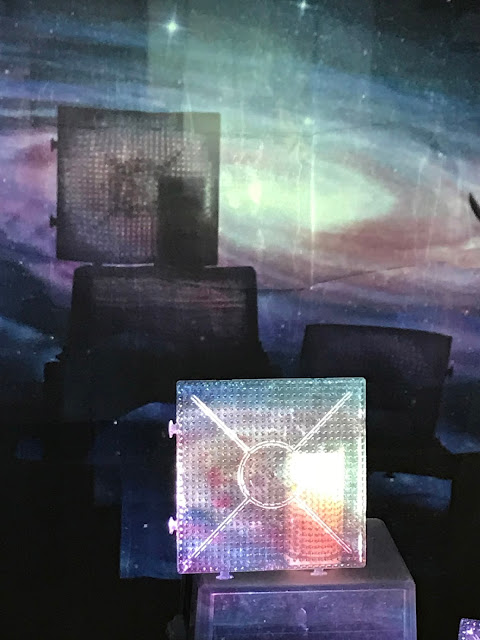 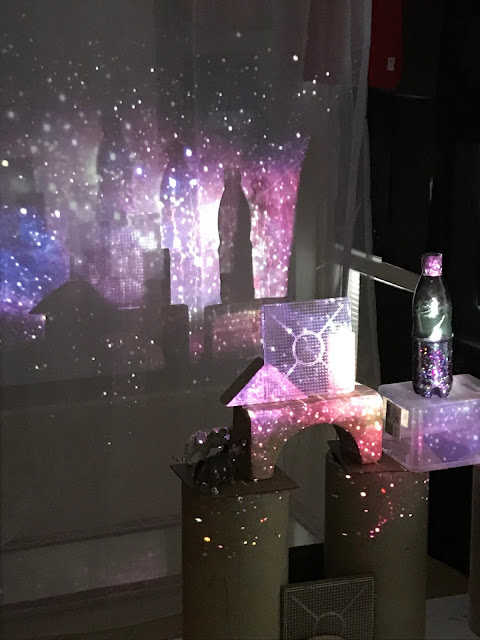 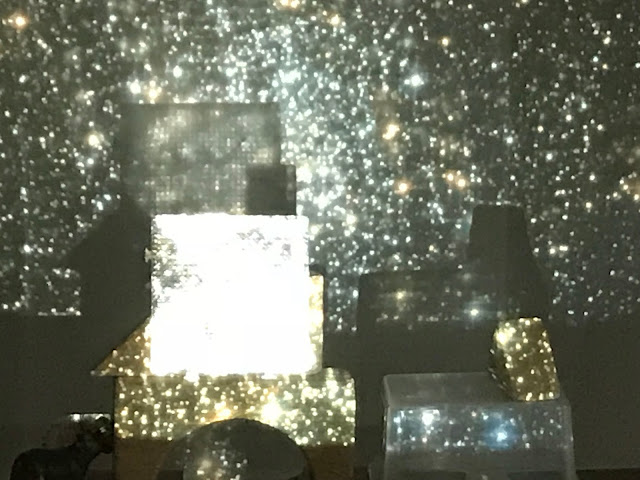 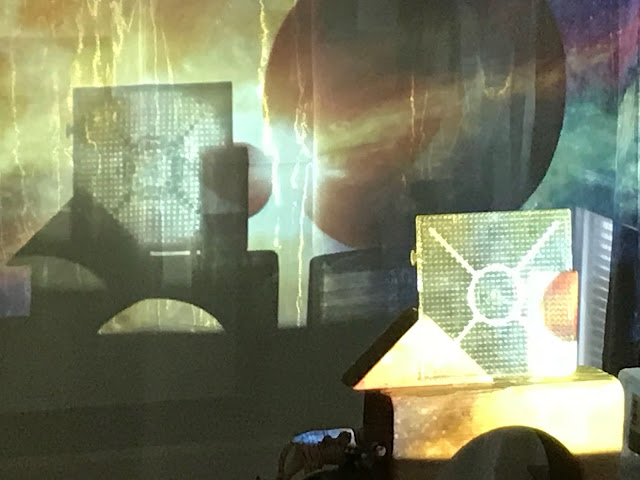 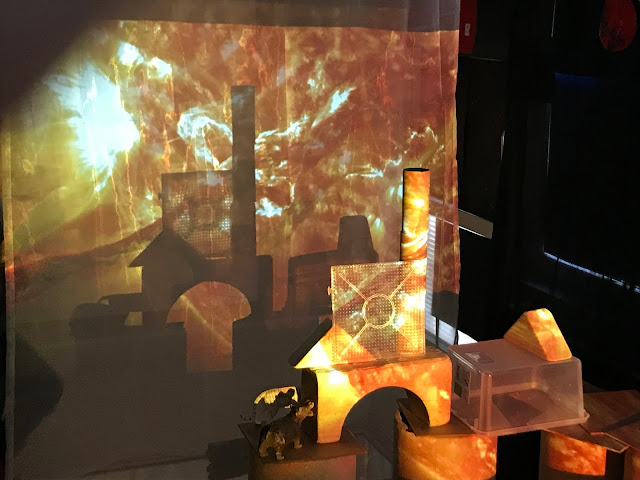 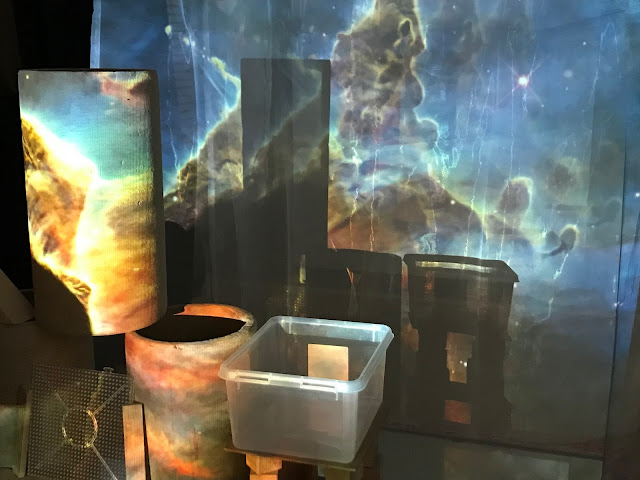 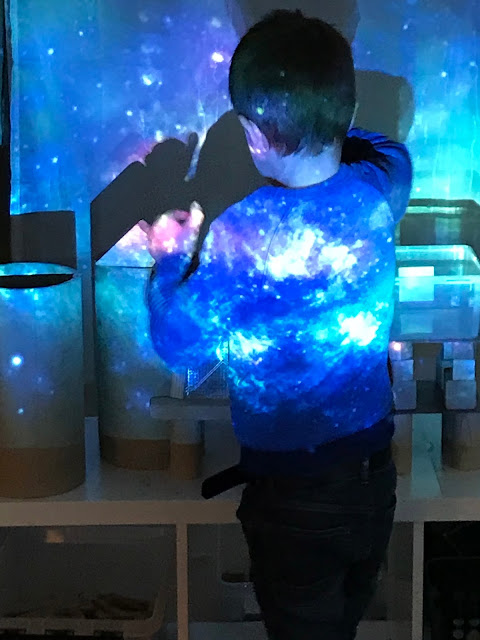 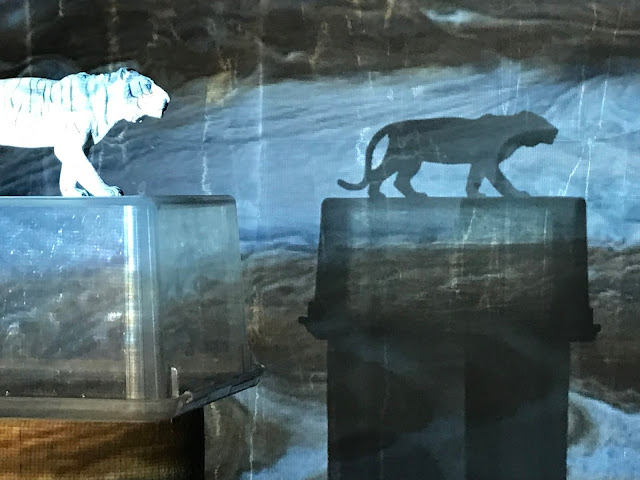 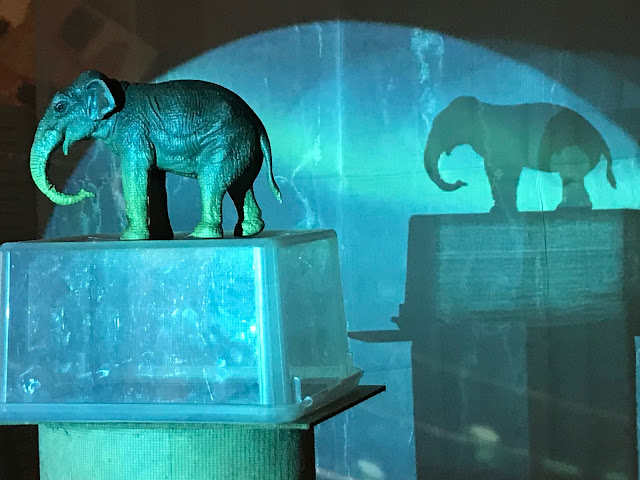 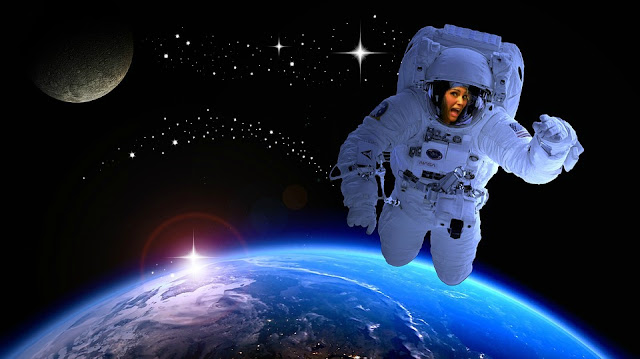