How much do we REALLY laugh?

During this last week I have read one of the many quotes that finds itself attached to a cute picture of children and is posted on many pages - it went something like - children laugh 300-400 times a day - adults laugh 20 times a day...

OK, there must be something wrong with Swedish children, I thought - I certainly haven't met any that laugh THAT much compared to adults. So I have spent a few days watching, today I brought it up with a few colleagues at work - "is preschool a bad place? Are we stopping children from laughing as much as they should?"
I have certainly never worked at a preschool where children are laughing so much more than the adults every day...

I started to get concerned... Am I missing the laughter ... which would seem to suggest that I am not doing a very good job of observing the children (which feels a very frightening thought)? Maybe I am terrible at counting? or maybe children simply do not laugh as much as 300-400 times a day - I mean, sometimes I think I laugh more than the children!!! I LOVE to laugh. I really believe in the health value of laughing.

This evening my feeling of happiness had a tinted edge - am I not helping to provide a happy environment for the children? Or is it, as we discussed today that children are so used to so much stimulation that it needs more effort to make them laugh? Have they become adults prematurely?

I have not been able to let these thoughts go...

So, I have been checking for information about laughter - and there are plenty of sites with the quotes children laugh 300-400 times a day and adults laugh 18-24 times a day - saying research says this - but not one of them mentions which research...

I then came across the Association of Applied and Therapeutic Humor which debunked the whole 300-400 times and adults 20, and actually said that adults can laugh more than children. Here they do quote the research - even in its admittedly small scale (as measuring laughter is not all that easy, and what is laughter - is it one session, or each guffaw?).

"They found that infant laughter increased in frequency over the first year and remained fairly stable during the second year. Between 1 and 4 months of age, infants laughed an average of only .08 times per minute during interactions with their mother. By 1 year of age, this had increased to .27 laughs per minute, and leveled off at .30 per minute by two years (equaling 18 laughs per hour). In contrast, the rate of laughter in the mothers remained quite stable over the two years, at around .55 laughs per minute (or 33 per hour). Note that mothers' laughter was nearly twice as frequent as infants' laughter (and was similar to the frequency of adult-to-adult laughter during conversations found in the previously-described study). Interestingly, by the second year, the rate and duration of laughter was significantly correlated between mothers and their infants, meaning that the more a particular mother laughed, the more her infant also laughed. Thus, laughter appears to be modeled by the mother during the first year and stabilizes in the infant by the second year."

I have to say that I was enormously relieved when I read this research - that children do not laugh significantly more than adults reflects what I see too. Yes I see children laugh at different things from what adults would laugh at - enjoying the simple things in life - but at the same time the children do not laugh at what adults find funny! I also found it interesting that both adults and children tend to laugh the most when interacting with others - and that adults laugh more than children. I really think that adults sometimes believe that children laugh more because of WHEN the children laugh (being sometimes for no reason an adult can understand - but I can still do that now - burst out laughing for no reason at all - I used to do it a LOT when I was younger, uncontrolled laughter - and some school lessons were much funnier than others, and controlling laughter when you shouldn't be laughing makes it even funnier - I mean I CANNOT do yoga - I giggle too much!) - but if adults cannot understand where the laughter is coming from, may it is then perceived that children laugh more - I mean usually as adults we know WHY we are laughing, what was funny...

... all started with a book published by Robert Holden, PhD, titled “Living Wonderfully“, in which he shared the experiences he had in his “Stress Buster Clinic” using laughter to cure depression and more in England in 1989. In this book he shared that according to his research children smiled 300 to 400 times a day, and laughed about 150 times a day (Laughter Yoga America)

OK so I feel like preschool is not some terrible place that stops children laughing, and that I have not been missing things that have been happening under my nose (phew!) - and I can count (in several languages I might add!).

I do, though, want to take a closer look at laughter. What makes the children I work with laugh? How often do they laugh? And when? What about my own children, who are older, is there a difference? 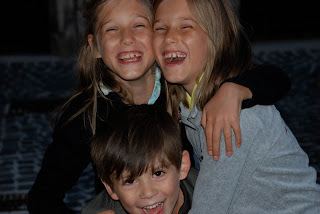 It does. We laugh a lot in my home - and I know one of my girls has used laughter as a strategy when she feels nervous and uncomfortable - and therefore can laugh when she feels threatened - which got a bit confusing for  her teachers when she was 6-8 years old!!
Friday and Saturday the girls spend the night together ( we had to get a bigger bed - as we kept finding them squashed together in a little single bed sleeping) - and there is a WHOLE LOAD of giggling coming out of their room then! Good job its just on nights not followed by school - as its hard for them to stop laughing.

And children's laughter really is one of the most wonderful sounds on the planet. Its pure magic.
Posted by Suzanne Axelsson - Interaction Imagination at 20:59

Email ThisBlogThis!Share to TwitterShare to FacebookShare to Pinterest
Labels: theory/thoughts