Last week we travelled to Tessin park (it is across the city of Stockholm for us... two underground trains from us) so that we could collect conkers... also known as horse chestnuts. Basically we started at one end of the park... as you see in the photo, and before we reached the end of the grassed area you can see three 3 litre bags were filled (it didn't really cross my mind as we set off about just how heavy this would be for me to carry back... the bags were not strong enough to carry seperately, as they were just freezer bags... serious learning curve for me there). 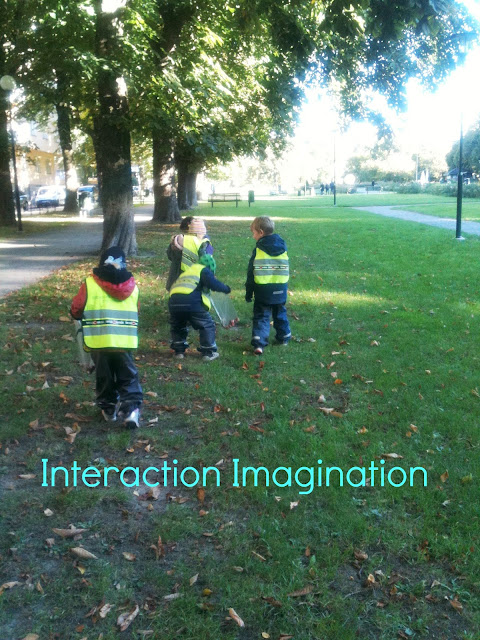 As we collected we started thinking about what we could do with them... and the children suggested robots...

As my colleague and I planned for the following week on Friday we wondered how we were going to include the robot idea into an already busy week... we don't like it to get too busy as we feel free play is  so important, so there needs to be plenty of time for that. Then we thought about using the philosophy session as a robot making session... a two part thinking session.

So this week the children drew a design for their robot protoype, we talked about Leonardo Da Vinci and how he drew designs and re-drew them until he felt satisfied... so there was no need to worry about having to get it right first time.. and how when he built his prototypes they sometimes did not work, so he had to go back to the drawing board.

We also wanted to use this session to gather ideas... as the children drew their robots we jotted down notes about what their robot could do and why they wanted this robot...

"my robot can cook food.... because then I will be able to eat whenever I want to"

"my robot can do everything.... because then it can tidy up for me when I have finished playing"

Next week we will share the ideas about the robots and discuss which of the robots would be the most useful one to build... and why.

Once the design was made, and the ideas were documented the children started to glue together conkers to build their robots.

Here they needed to exchange ideas also... how to make the robots balance, to be quick placing the conkers onto the hot glue so that he was still sticky... they soon realised that slow work meant the glue hardened and was no longer sticky.

There was so much learning happening here... and it was very intense, and as educators we needed to scaffold the children's experience with the right balance, that they were allowed the space to test things out, without getting too frustrated that they wanted to give up.

At the same time we had visitors from Iran...  Yahya Ghaedi, associate professor of educational philosophy from Kharazmi University and partner were observing our philosophy session... so I tried to translate bits here and there, if there was time... but luckily had some time afterwards as the children were getting ready to go out to explain some more about how we have been working philosophically with children.

He was impressed with how the children communicated with each other, sharing ideas in a respectful and enthusiastic way and how ideas could be discussed through drawing, design and contruction and not always a dialogue as the children sit in a circle. After all verbal communication is not the only way to communicate ideas. 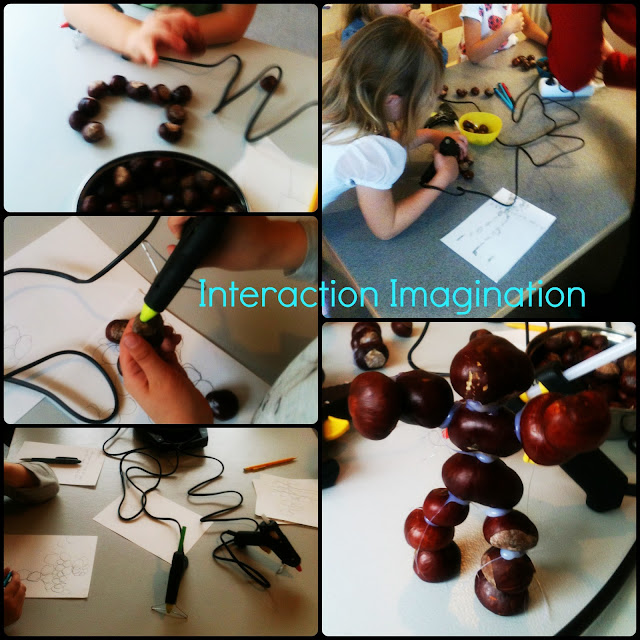 I am looking forward to next Tuesday to see how this robot dialogue continues.

And yes, the children did come in contact with the hotness of the glue gun, but as they are low temp glueguns it was just a hot experience and not a burn. Risky play without the risk being to great.

And if you saw the video I shared yesterday on my facebook page you would have seen that the glue gun encounters were taken into consideration when thinking about whether or not is was a good idea to have eyes on your fingers and mouth on your hand....