Professional Development of the Third Teacher. 5

This week I am going to write about space.

One of the things I have noticed by my trips to USA, Canada and Uk is the smallness of the space available to the children's play (indoors) compared to that here in Sweden.

Where I work right now has huge rooms... but in all the places I have worked here in Sweden there has been more space. It is the first thing I react to when visiting abroad... the space made available to play.

Sometimes rooms can be huge... but they are divided into so many small spaces that there is no BIG space for play... no huge area of floor space.

Now I feel there can be benefits of these smaller spaces... it can create a more peaceful/quiet play (at least on the surface) but it does not lend itself to big play... the children are compartmentalised - as is often their play... construction in one area, role play in another... small squares of play.
In big areas... with a large floor space, the room tends to say RUN... and that can have its downsides too in the midst of role-play and constructions etc...

and the question is what sort of play do we want... do we always want that peaceful play... or are we going to invite chaotic play too... I aim to write a post about this in the future...

So I always find it hard to try and find that balance that says... play big... without it saying play so big you disturb everyone else's play. After all we need to create a space where everyone feels they can play. 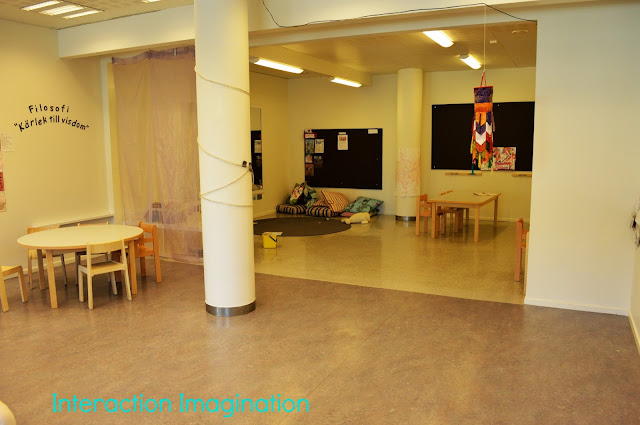 This is how our yellow room used to look... before we divided it up to create an atelier here... this room was supposed to be an area for quiet reading in one corner... and for drawing in another... and construction (my back was to the construction area)
Of course all that space meant that the children just wanted to run... and as we had a large empty room for that purpose we did not want this to happen in every room... we felt we needed to give the children options in their play diet.
As teachers we were failing to encourage the children to play without running here... so we needed to change the space... the third teacher needed to inform the children of other play options...

This is how the Yellow room looks now... the area to the left of this image... is the same area as the cushions on the image above this one... there is now a half wall dividing the space of the atelier from the rest of the room (between the two pillars... almost). It needed to be a half wall... as the setting is located in an old post office... and there are HUGE large windows onto the square and then lots of space going deep into the building without windows. So we have to work hard to allow natural light into all areas.

The rooms are still large... and still afford the children the space to play big... but there is not the same amount of running any more. (and yes we are outside 1-3 hours a day - depending on activity, weather etc - when it is well below zero the very young don't move enough to keep them warm).

In my post about Empty Spaces(from my visit to Iceland as part of Play Iceland) I wrote about how space was created by not having lots of things on shelves... there was space for the children's imaginations.

This is something that we have utilised in this year's arrangement of the rooms... as I described in the first of this series, we wanted to re-look at the third teacher... to see how the children played... so we took away the toys and just left loose part...
So far this has been working well... the children have filled their time with play, and there has not been any longing for the lego or other toys... something we hoped would happen, but were not sure if it would.

Creating space for children's play.
It requires floor space... carefully considered... not too big, not too small... and then think about how play areas can be combined... role-play and construction are always two areas we have close together so the children can mix the materials...

We now have documented the space for a second week.
I have decided not to look at them yet... waiting to see them at the end of the collection period.