This weekend I baked cinnamon buns with my children at home to celebrate the Swedish National Cinnamon Bun Day... yes, it exists... and yes, they are too yummy not to get in on the act!!

It is fun to bake with children... at the same time it can be rather stresssful... my children at home though are no longer preschoolers and are quite comfortable in the kitchen... they even make up their own recipes these days and have the confidence to give them a go... for instance Michael wanted to try out if just mixing flour and water would make bread... and he rolled them in small stick like shapes and we friend them in some butter... then he dipped them in pizza sauce... this is now one of his favourite quick fix foods!!

Today we baked at preschool... it is what we finally came to the conclusion of last Friday... but that is a whole other story, that IS worth telling, just not right now... it needs its own space...

Today I was feeling not 100% and just in case there was some mysterious sickness about to emerge I did not work with one of the scone making groups... I documented instead.

This is my first time not to be in the thick of baking with the children, and to just stand and be the observer... I found it really interesting.

What were we trying to do?

There is always the wish that the children are competent and can manage themselves... but here we are thrwoing them into something that is totally unfamiliar... especially in the preschool environment... where there is suddenly not the one to one baking opportunities of home, but the incessant waiting of turns... there is a LOT of waiting... even when there is only five children in a group (and sometimes at home, with twins, it was hard to wait just the two of them!!!) 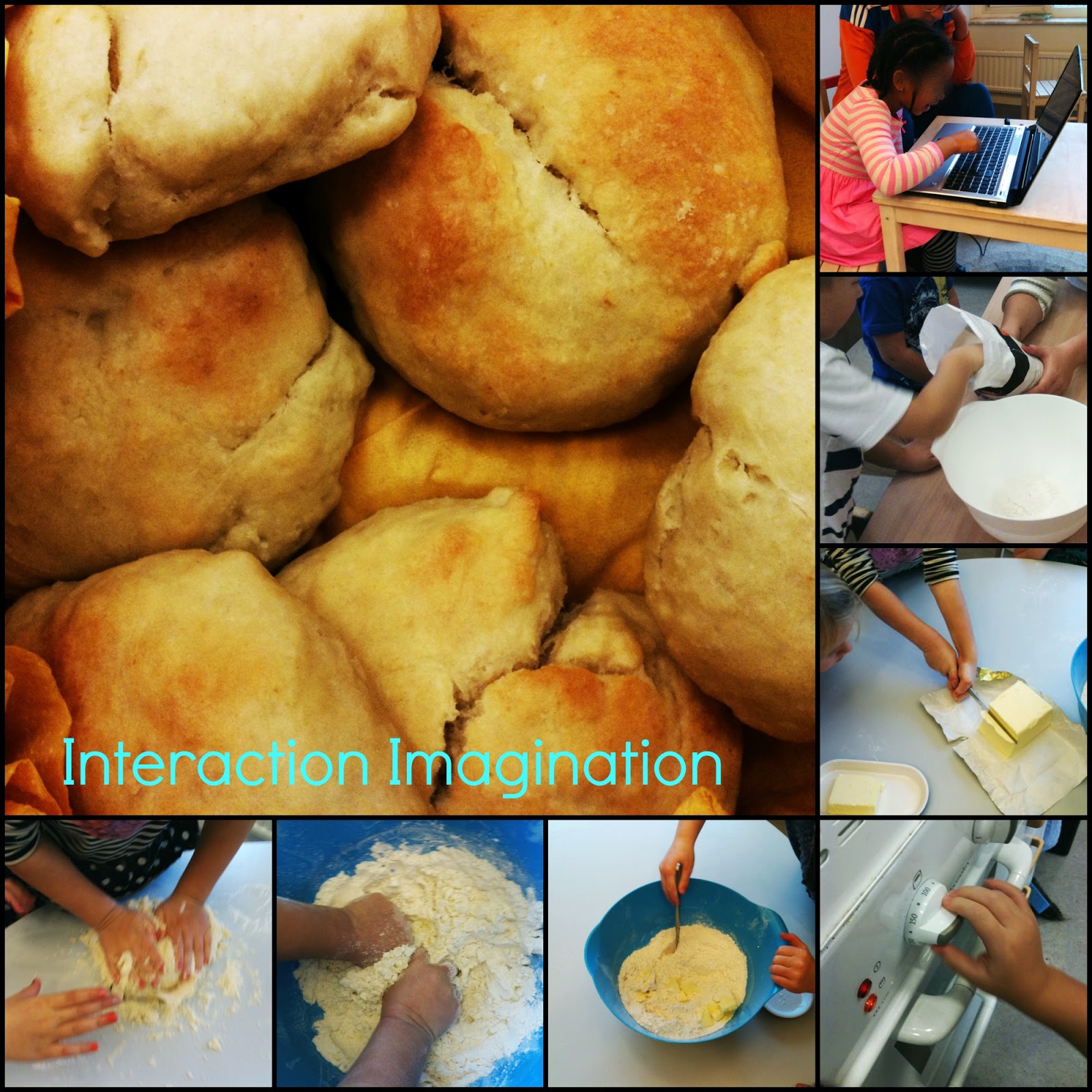 So was this an exercise of turn taking?
Was this a time to test new tools out... because yes that happened... and it was wonderful, but it did add to the waiting time. Some children lots focus for a while, and then came back... some had problems with keeping hands clean... I mean just how determined do we have to be with clean hands... these young children were sticking them in their mouths and noses all the time... they were being sent back and forth to wash hands... I guess they did learn that have clean hands is important when cooking (and why) and they did realise just how often their hands ended up their noses without them realising... lol. So it was a time to learn about hygiene!!
Was this a time of math? yes we measured, we counted, we compared
Was this a time for literacy? Well yes, we had asked the children to look online for a recipe, using letters, sounding out together and finding a recipe to use... then all the words on the packages etc
Was this a time for enabling children to feel competent? - I actually don't know... yes partly, as they made something for their own afternoon snack, and yes, we tested out the recipe that one of the children thought it might be (milk and flour - they ended up very hard, heavy and compact - and did not impress the child who had suggested it - did this make her feel competent or not???)
Not many of the children actually liked the scones at snack time... how did that make them feel?
The actual baking itself required an awful lots of scaffolding... to enable turn taking, to spport how much of every ingredient.. really to enable the children to be competent, we need to do this often... like I have done with my own children at home... where my 13 year old daughters can cook meals completely on their own, and my 10 year old son cooks meals with my guidance (or my presence) - often the three of them will bake a cake or something together... but making something sweet is often rather satisfying for children, who I think often have a sweeter tooth than adults... so maybe our choice of scones was not right for this group of preschoolers? But being a sugar free preschool does not really leave you open to baking sweet stuff...

Maybe having a bread-baking group, just a small group, that get to practice their baking skills more often... then this group would become competent bakers, less reliant on the adult... But for now I have mixed feelings about baking with preschoolers in this way... yes, there was oodles of learning going on, yes the children had a marvelous time... but I just felt uncomfortable with the level of adult scaffolding... which was necessary to support the children in theis new experience at preschool... last time we baked it was December last year and we made pepparkakor (spiced cookies) - so Iguess maybe this baking experience will serve us well in consideration that December is fastly approaching once more... maybe we can hope that less fingers end up nostrils and in mouths?

So how often do you bake with preschoolers (in home/at preschool/ECE setting)
What do you think the main benefits are?
How much adult support is needed?
Posted by Suzanne Axelsson - Interaction Imagination at 22:53

Email ThisBlogThis!Share to TwitterShare to FacebookShare to Pinterest
Labels: food, reflections on my work