Using the big metallic tray/serving dish from Jenin a labyrinth was made using plasticine.

it was an easy process to roll the plasticine into long strips, choosing a colour scheme was also important... it was supposed to be all green... but compromise was made when there was not enough green to complete the entire labyrinth... since blue and yellow make green, these seemed the next best colours... red and brown did not feel right apparently so black was used for the final bits.
This labyrinth was started from the inside out... I wonder if all children have this approach.

There was much thinking needed to make the gaps large enough for the ball to traverse through them, thinking about how to make it a little tricky and not too easy... blocking off routes, and then realising there was no way to get to the middle and having to make adjustments again.

The roundness of the tray influenced the labyrinth design... maybe on a square or rectangle tray the design would be different.

Alternatively the labyrinth could be made directly onto a table in a much bigger format and a ping-pong ball used to blow around.

Maybe the children could draw their labyrinth designs on paper, to record them, and maybe also work on how to make changes to the design to either make it easier or harder. Could colours be used as part of the design in a specific way... ir a challenge to create a design where the ball had to pass colours in s a specific order?

What about designing tunnels? and bridges? (of course bridges would mean a loss of magnetic contact if done magnetically... but this could be a part of the learning process of understanding how magnets work, and how to design labyrinths for different uses.).

There is a short film included under the photo. 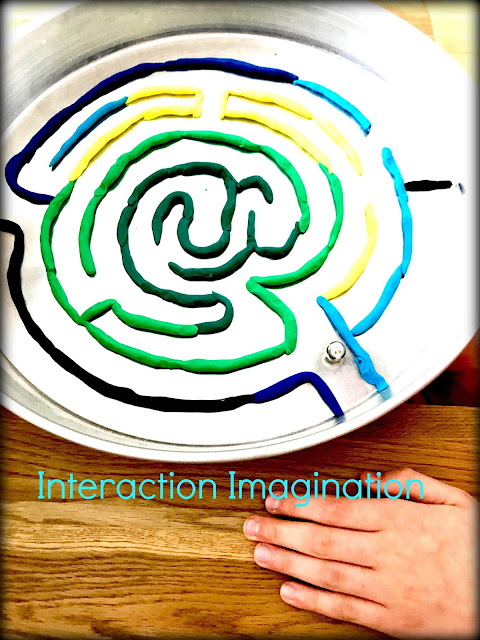 Email ThisBlogThis!Share to TwitterShare to FacebookShare to Pinterest
Labels: construction, creativity, messing about