Does Boredom give birth to creativity? (and Provocations) 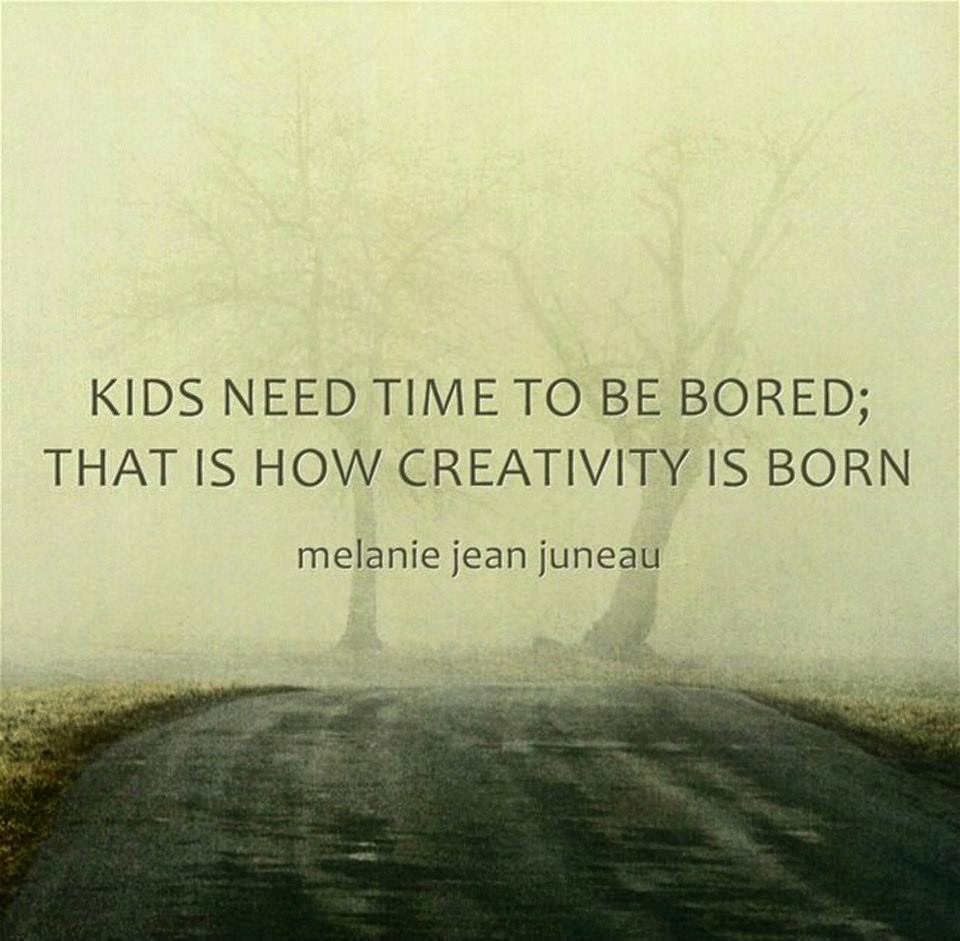 I have seen that this image and quote going round facebook recently... but its not the first time that I have seen boredom and creativity being put together... and yes I have kind of said it myself too... but is it boredom that creates creativity or is it that we as adults should not be afraid of the phrase "I'm bored" ? Because, when I have given myself the time to think, and rethink... really they are two very different things...

Being bored is not the most creative state to be in - but having unscheduled time and space to allow children (people in general really) to get creative is different - and maybe we should start thinking more about the word "BORED" and what does it mean.

If I am a child at school and I am bored and I have to sit through boring lessons, and I am expected to listen and pay attention... I hardly think that it is going to increase my creativity... in fact there is the HUGE risk that it is going to have the opposite effect... it will demotivate.

This is quite the opposite of summer - when emptying the days of activities decided and lead by adults gives the time to the children to GET CREATIVE - to start thinking about what THEY can do... the potential of the things around them... and in the beginning when children are not used to thinking for themselves, when they are used to having their time filled by others (school, afterschool activities, clubs etc etc) then at first there is the risk of the children saying "I'm bored".

I don't think they are really bored... they just don't know what to do... and maybe what we as adults need to do is not interpret the children as bored as the children are saying but that these children need  more space to practice filling their own time.

While I was in Canada I got talking with Diane Kashin and some others about "Provocations" -
are they really provoking thought in the children - or are they filling time? Are they an opportunity for creativity or are they the product of teacher creativity on the children's behalf? I have no answers, I am just thinking and rethinking... have some provocations become a glorified template where the activity is pre-selected by the teacher (the colours, the resources, the material, the topic etc etc) and all the children need to do is sit down and do it as they would have if colouring in a pre-made picture, or filling in a worksheet? How is the balance of thinking... are the children doing enough? Is there scope for the children to develop the provocation - to be creative - and is there documentation as to why that provocation has been put out... what is it that is being provoked - and afterwards was it successful as that kind of provocation... or did it provoke something else?

Instead of provocations on the table etc... could children be provoked by emptying their schedule...

I did that with a group of 24 seven to eight year olds once... we sat together at the start of the session and let them know that for the whole afternoon no toys or equipment was to be used in their play. That was all that I said. They sat there "bored" not moving for ten minutes at least just complaining... then one got up and asked if some others wanted to play - and they started role-play games, chase games in the outdoor area (as they could freely move in and outside) and the following 3-4 hours were filled with amazing collaborative play - and the children went home happy - some even saying it was the best day ever...

I had to be prepared that the children would just sit there in silence and whine for the whole afternoon... and some sat there longer than others until the laughter and play drew them off the meeting sofas and into the creative play. I was not afraid of the children having nothing to do, I was not afraid of them going home and saying they had been bored - because in the end I knew - I knew, I believed in their competence - that they would be able to fill time with their imaginations... either sitting or playing together.

I handed over TIME to the children, something I think children seldom get to have power over, for one reason or another...

So no, I don't think boredom is essential but I do think TIME - unfilled time for the children to fill themselves is. I also believe that when children exclaim  "I'm bored" it often means that they have not been given enough time to think through the possibilities... or enough practice at filling their own time

Email ThisBlogThis!Share to TwitterShare to FacebookShare to Pinterest
Labels: adventures abroad, creativity, reflections on my work, the competent child