In the last few months the children have started getting rather productive on the drawing front - a whole new interest - previously they have been mostly interested in role-play. This has meant the atelier has been getting over-crowded with small nameless creations as well as a steady stream of activity between the atelier and the cloakroom where the children have been placing their creations on their shelves to take home. Not an entirely satisfactory situation with the constant movement through other children's play. Its taken some time to think of a solution that not only works for the children but also works in the limited shelving space of the atelier. At first I thought of putting in an extra shelf and each child having a small drawer like box to put their finished and half finished work in - but while I was doing a spot of winter break cleaning and sorting a discovered a box of unused files and felt that this would be the perfect option... several children have expressed an interest in making books and by storing their creations in the file it would feel like building up a book.

I cleared the atelier table of pens and paper that have always been there - but have contributed to a congestion and instead placed them on the shelf next to the table - drawing paper under the pencils (the felt tips have been taken away for now - as they had become a nag situation, and if the children are not interested in putting the lids back on the pens and taking care of them I do not want to be a negative force... let them draw with pencils, let them draw and draw and their focus be on that right now rather than pen lids... and when they have satisfied the drawing frenzy then there might be the time to think about taking care of felt tip pens). There are paper scraps (in many colours, sizes, shapes and paper types) below the scissors waiting for those children feeling the need to just cut cut cut.

Yesterday I introduced the children to their files - a few of the children individually early in the morning as they arrived (thinking that they would then be able to help the other children later on with the process... and this turned out to be exactly what they did).

So now when the children have completed a drawing/creation they collect their file from the shelf and take it to the "file station" (it doesn't really have a name yet - and it might not) - where I placed a hole-puncher. First holes are made in the paper, the file is clicked open, the creation fed onto the metal loops and then it is clicked closed and put back on the shelf. 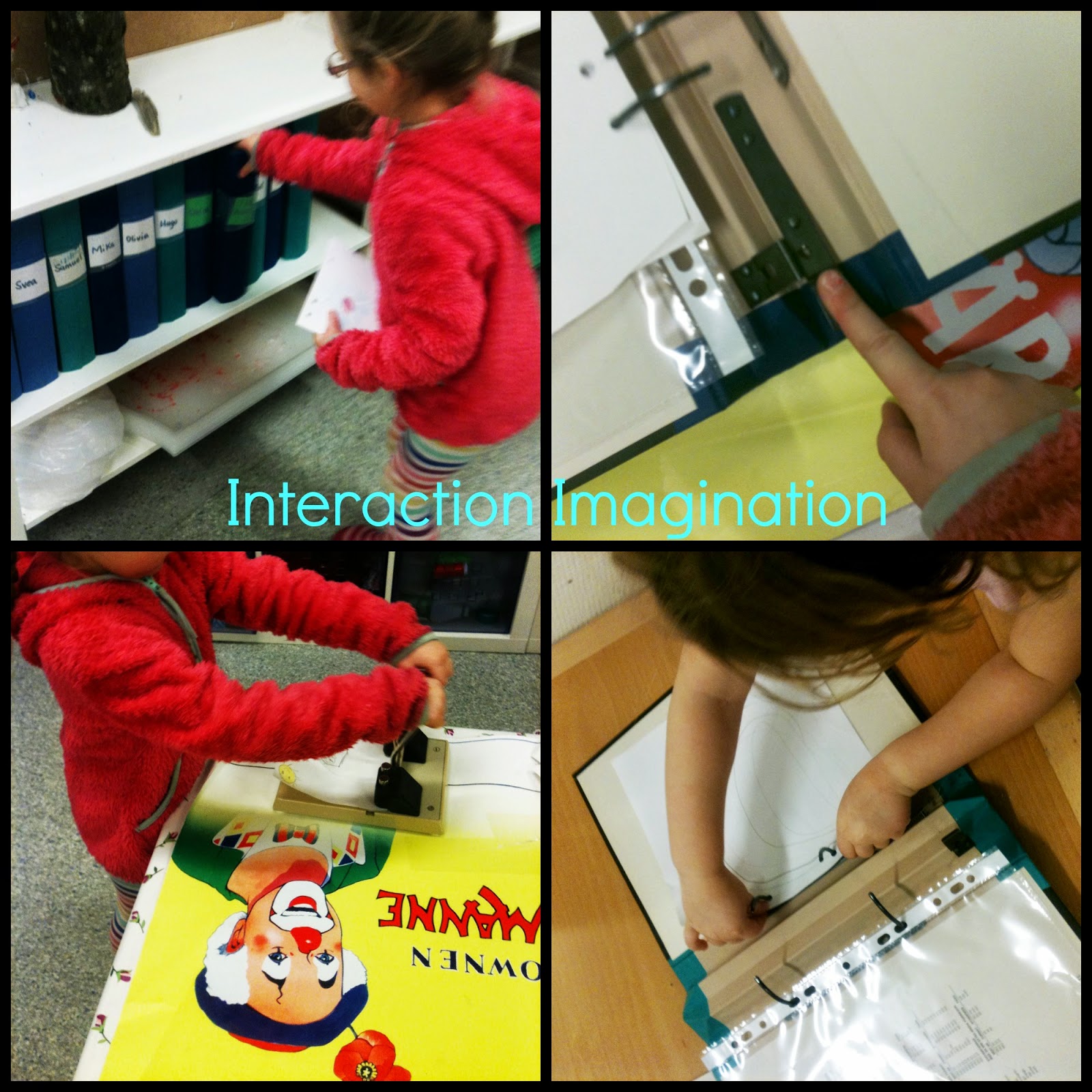 It has been quite a process for the children to remember each of these steps... and feeding the metal loops through the holes has been by far the trickiest part of it. By keeping the files at the "file-station" means the table remains spacious enough for everyone else creating.

This process has also meant that when each child is finished their art/work is in their file (so we know who it belongs to regardless of there being a name on it or not) - and the table is clear and inviting for whoever else wants to get creative - before the children were just leaving most of their art, or practices on the table without a care that it was filling up all the space and making the atelier not feel available to all the children in the preschool.

The children know that if they want to take anything home they can come to their file and take it home at the end of the day. This also means that there is no more wrinkled up creations strewn over the cloakroom floor as they have tended to fly of their shelves as the children load and load them with creations.

The children have taken to the files well and with great excitement - yesterday they need some help... today they were in full flow. Each file has their name on it - I have varied the colours of the files and the labels somewhat on all the many names we have starting with S (although I did not point this out) - as all the children are pre-readers...  (but most can read their names and most of their friends names now without any problems). 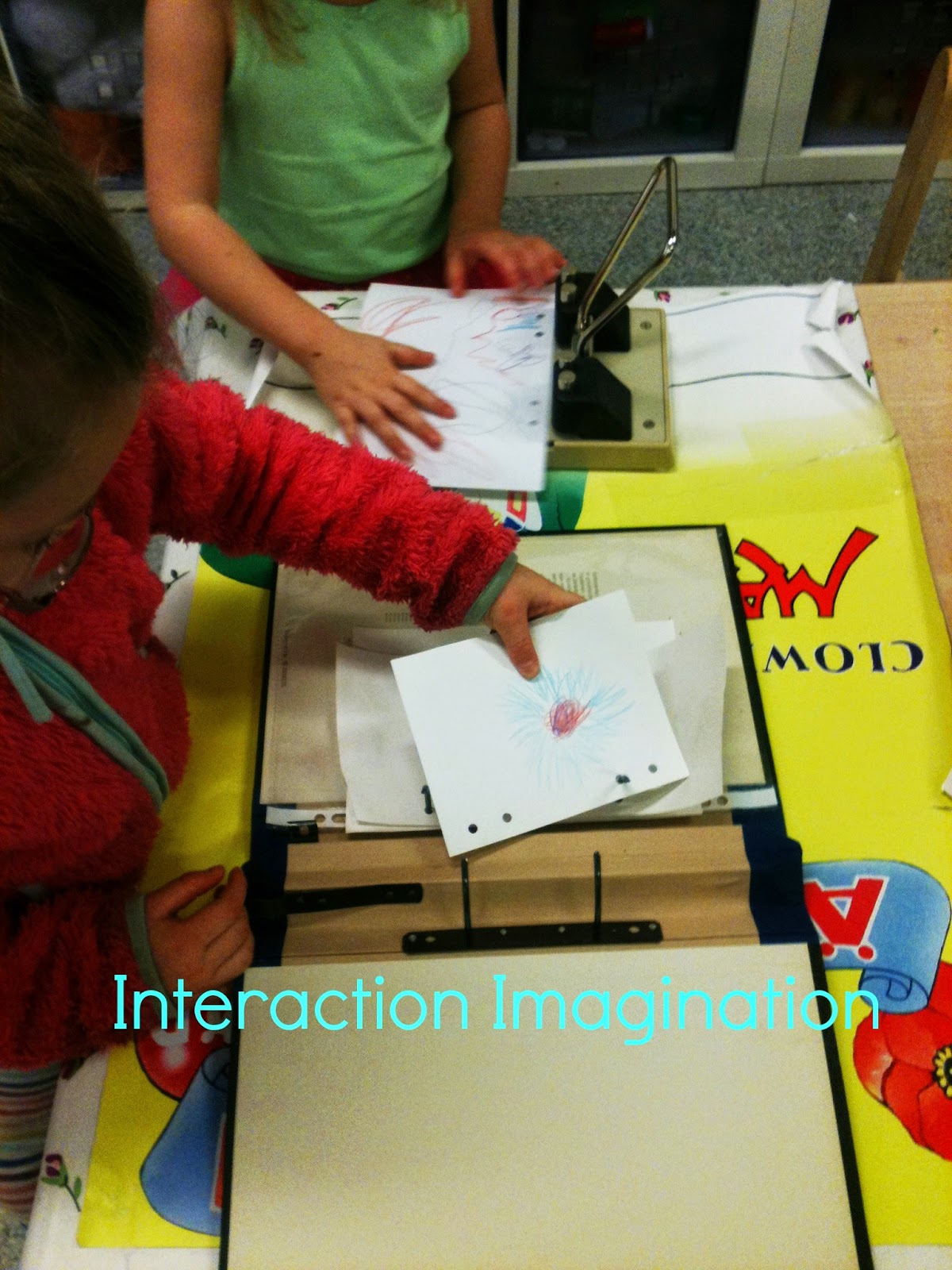 We have ideas about how to develop this further... but for now we will let them enjoy and get comfortable with this process.

Email ThisBlogThis!Share to TwitterShare to FacebookShare to Pinterest
Labels: creativity, documentation, in the atelier