Last Friday the children reflected on their week of play and decided that they wanted to play school - how this idea exactly came up I am not enitirely sure... but it got mentioned and it took off as an idea with great excitement with all the children. They took home small notes that they would need a school bag and gymclothes.

So today we have played school... the children were far too excited to wait for the "PE/gym lesson" to get changed... they more or less got changed as they came through the door... and as we were playing school this was all part of the fun.

There was free play until everyone arrived... and the children were well into the school roles by then, carrying their bags back and forth and feeling really rather very important. We then asked for all the school children to hang up their bags in the cloak room. When they came back they were asked to line up at the door... and they were greeted one by one with a handshake to mark the start of the school day... this is a common thing in many Swedish schools... 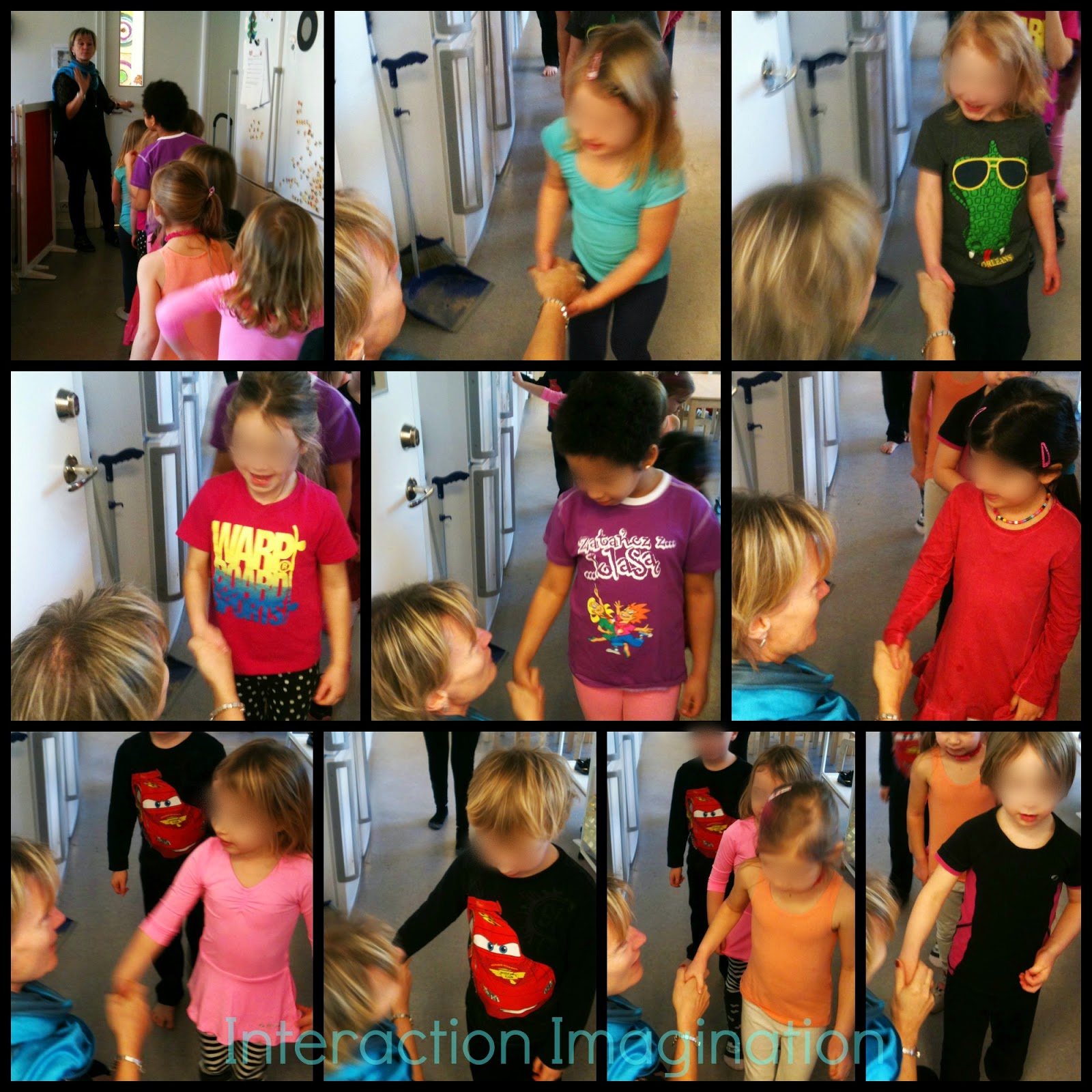 We sat on the mat for our morning meeting to explain how the morning was going to work and that all the children would get to the chance to test everything out. The children were divided into three groups of three... by saying 1,2,3 round the circle - the children needing to remember what their number was - and with a little help from each other they were all able to find their first activity/lesson. 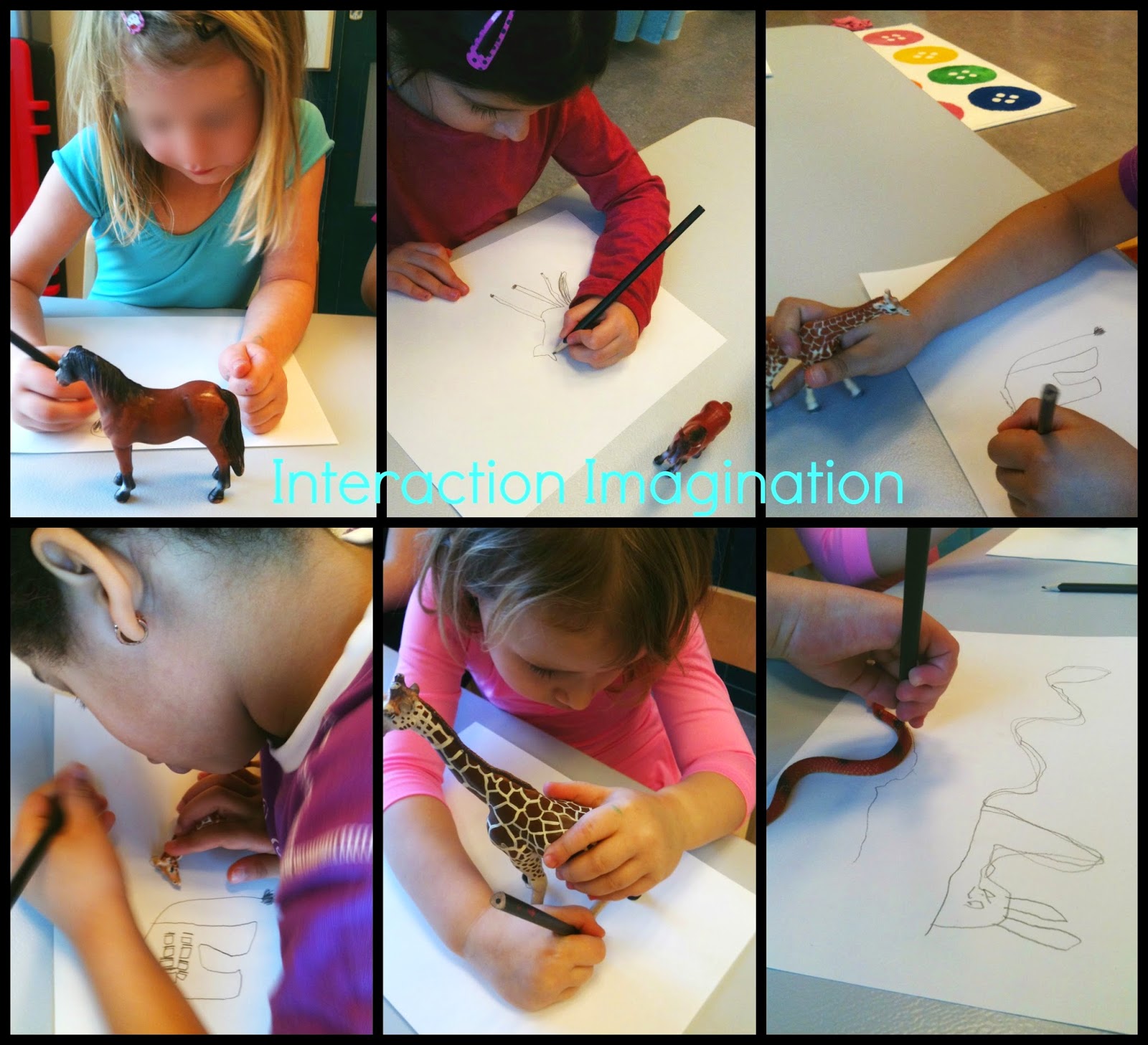 Art was one of the lessons... a basket of animals was put out and the children could choose and animal to draw - it started off by the children doing this as a still-life, some of the children decided that drawing round the animal would be a good idea... and this included the feet... there are, afterall, many ways to draw around an animal... and over the years I have seen children do this and then look in surprise at the image on the paper wondering why it does not look like the animal they have drawn around... to then work out why....Two of the children chose to draw a snake... both for the same reason... it was the easiest thing in the basket. Assessing the situation and working out how they could be as successful as possible in the "lesson". 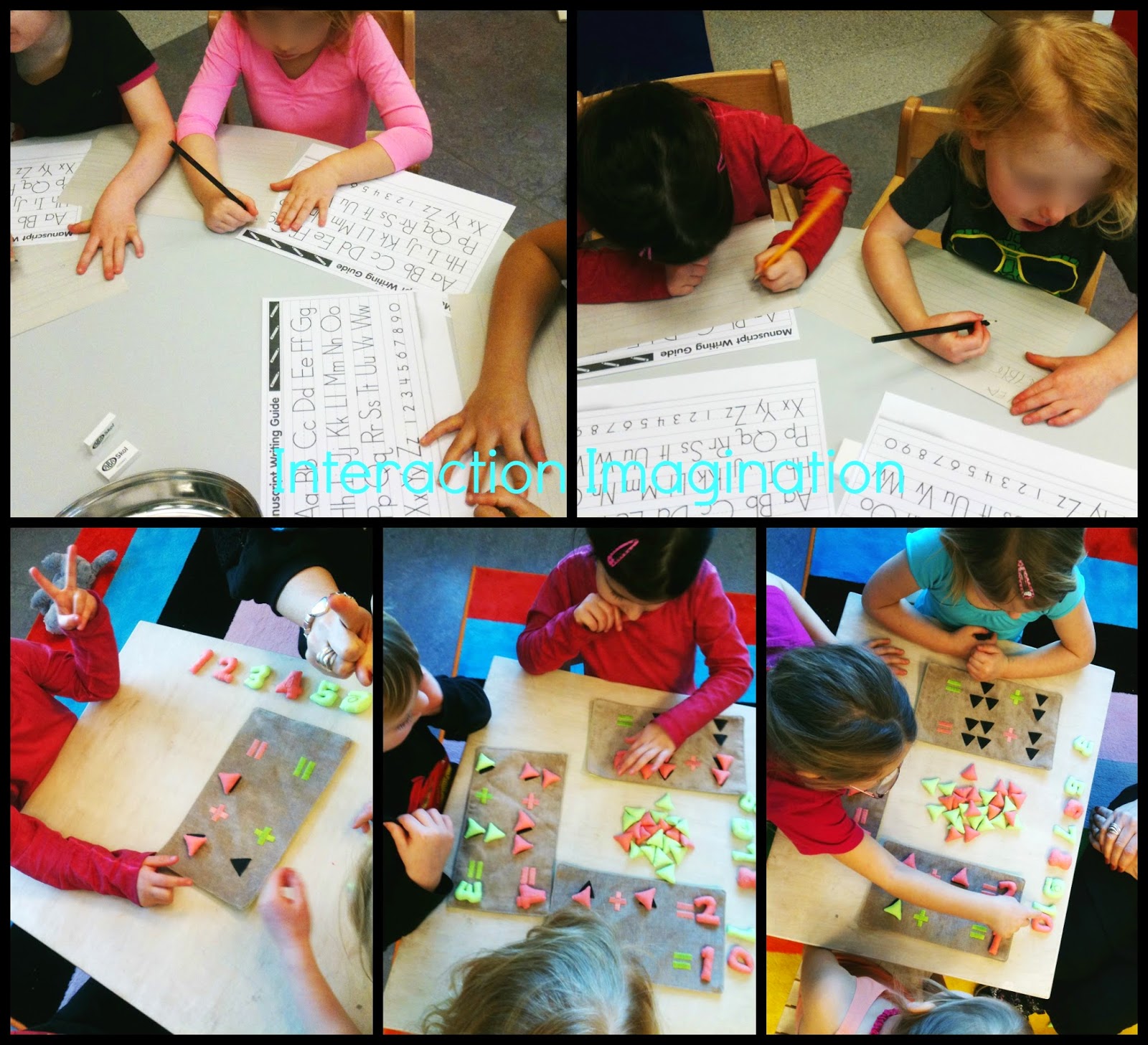 The other two "lessons" were maths and Swedish... the Swedish being writing practice. There was special paper to help form letters on, and a sheet with the alphabet and a bowl full of names so that the children could choose how they wanted to play school writing. They could do as much or as little as they wanted... the most important was that it was fun.
Maths was addition using one of the games that was bought in Jenin, Palestine (Not to Forget Women's Society). This proved to be a popular activity.

The children were busy at each activity for 5-10 minutes - we rotated as we saw the groups were ready to test the new "lesson" out. Once the children had the opportunity to do all the lessons it was time for the long awaited gym/PE lesson. 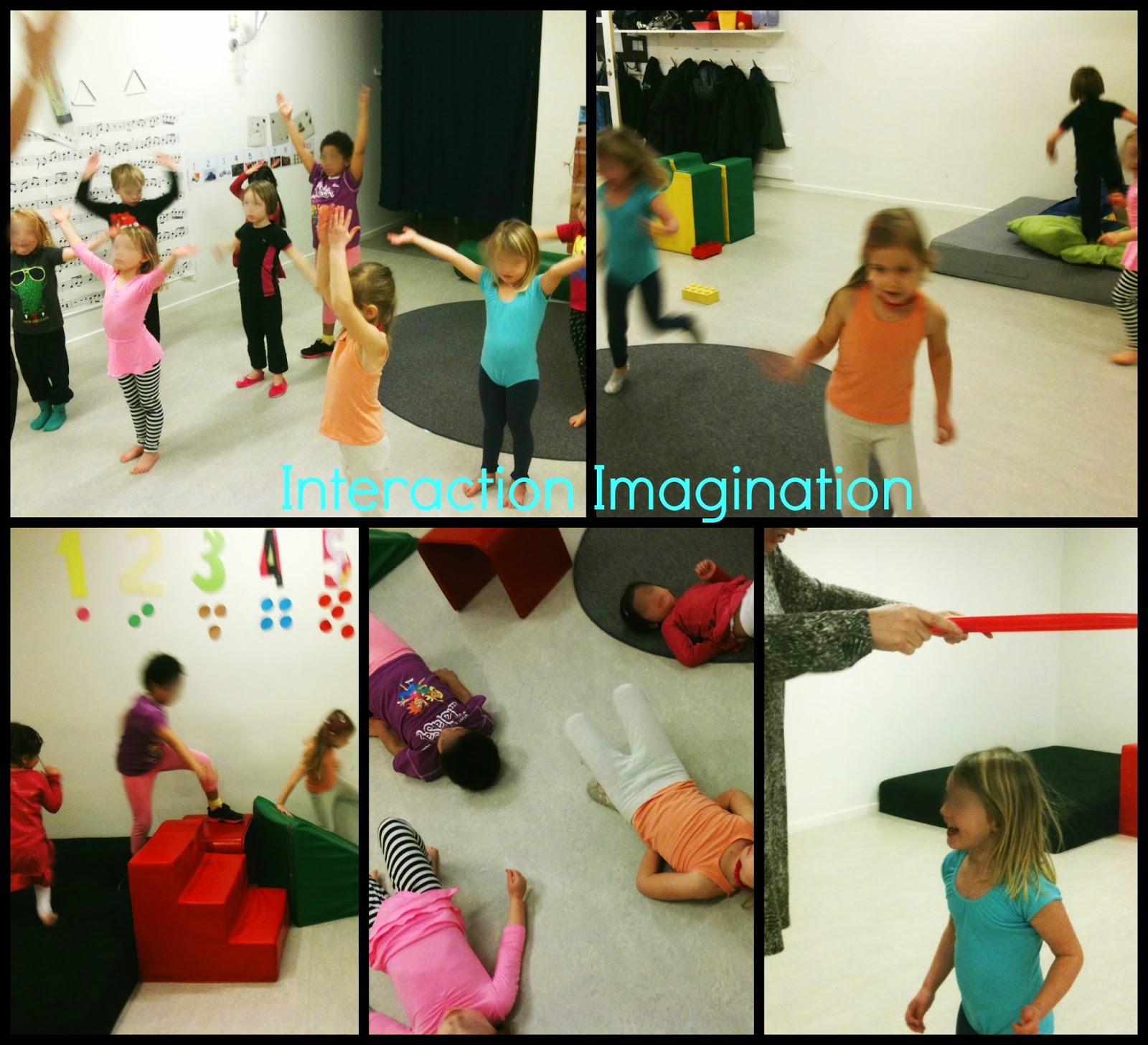 We started off with doing PE as I had seen the children do it in Jenin, Palestine... in rows and copying what the teacher did - apparently this was called "Swedish gymnastics" - either that or someone was pulling my leg...

Then there was time for PE that is seen more foften in Swedish schools... especially with the younger years... with running round (without crashing into each other), jumping, balancing and breathing exercises on the floor with some stretching... not just great physical exercises but lots of listening skills being put to the test too! The children were having a great time... so much laughing

Then it was time for a shower... under the hulahoop with water sound effects... 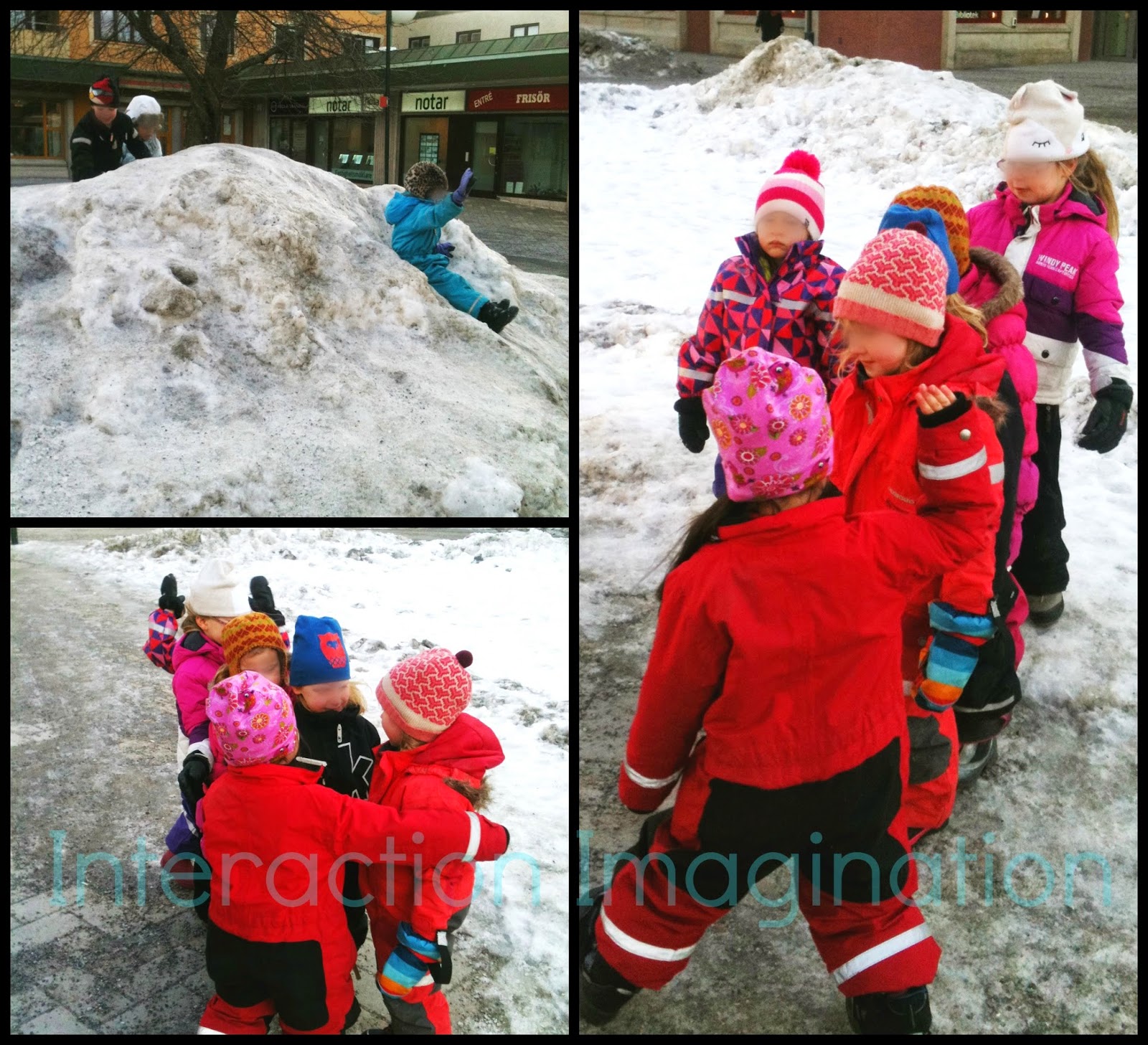 Then it was time for break/recess - the children informed us that school children do not wear high visibility vests when they are out... so for this outdoor adventure to the square the children did not wear vests. They continued to play school though.

When we returned indoors the planned part of the play school day was over... lunch, rest and then the afternoon was left... the children were already planning as they took their snow suits that they would continue the school play in the afternoon.... and they did.
Posted by Suzanne Axelsson - Interaction Imagination at 22:19