One of the things I noticed in Jenin is that there were not many areas dedicated to children's play - and with streets being filled with cars going by - and also with the occasional gunfire (you heard it in the city several times a day) and also with the cultural fact being on the street was not always socially acceptable for women this made street-play not as desirable as what it might be in other countries… I have been following how street-play in the UK has become a project to get children playing outside more… see Play England website for more information. Could a similar project be something for Jenin? Or is there a need to start with the play-spaces?

Most of the play-spaces I saw there were in conjunction with a school or kindergarten/preschool - and were not available to the general public… this is quite different from here in Sweden where everyone has access to preschool play areas on weekends and other times when the preschool/school is closed - AND there are lots of purpose built play areas to…. AND most apartment complexes with have a play area in the garden if it is large enough (there is a sandbox and playhouse next to the lawned area where I live - and we live about 50 m from a huge green area with a large play-space).

Why am I talking about the importance of play-spaces in Jenin? It is because I believe these are important places for learning… for building up hand-strength for the hand that will write, for developing balance, for problem solving, for social and cognitive development… play is essential - and outdoor play is an important part of a child's play repertoire - and therefore I deeply believe in the fact that by investing in play-spaces a community is also investing in the education and well-being of its children… its future.

Here are some articles and research about the importance of playgrounds for children's cognitive and social development - it is not just me that believes this, and there is much evidence to support it…


I got to visit one of the few play-spaces in Jenin - one that The Freedom Theatre together with local children worked hard at fixing up…. taking away layers upon layers of rubbish, fixing swings etc - the hope was that the city would continue with the work of revamping the park… sadly that has not happened and the enthusiasm of the local children was sucked right out of them.
How then can the children of Jenin get the play-spaces they need - if there is no real value seen in playgrounds - as the educational value of them is not seen. It is, though, important to acknowledge that play is not meant to be educational. Rather education flows naturally into the environment of a child at play. So the idea is not to construct a classroom in the play-space but for us adults to be aware of the natural learning that accompanies play.

Here are the images of the play-space I got to visit dying my week in Jenin… I am aware of one or two other public play-spaces which I did not have time to visit. 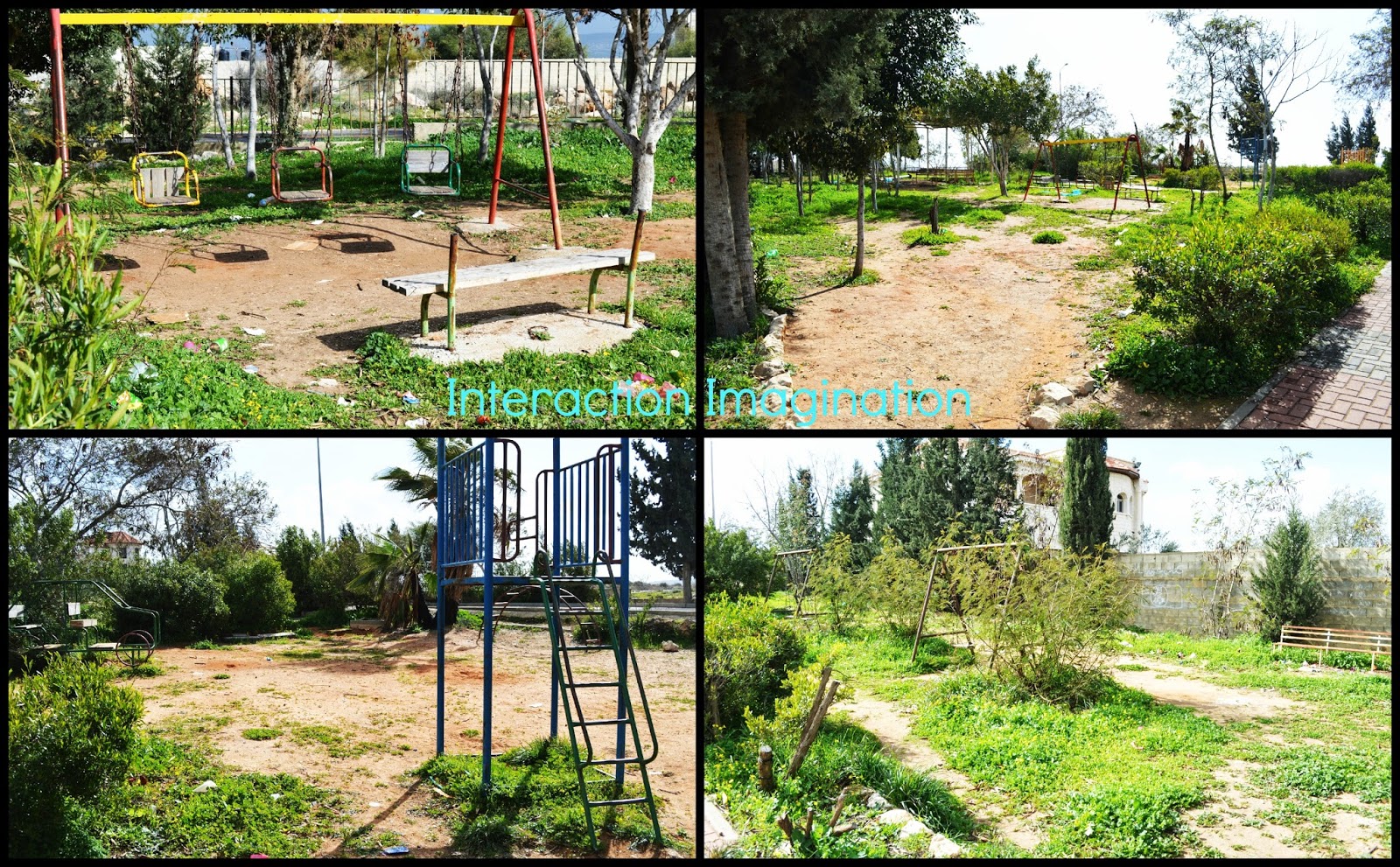 As you can see that during the months since The Freedom Theatre and the children worked hard to clean up the play-space it is slowly becoming a place for rubbish again… this of course was a problem in the whole of Jenin and not just the play-space. Swings have been fixed the best they could… and the two slides were missing the sliding - just the steps up to the platform 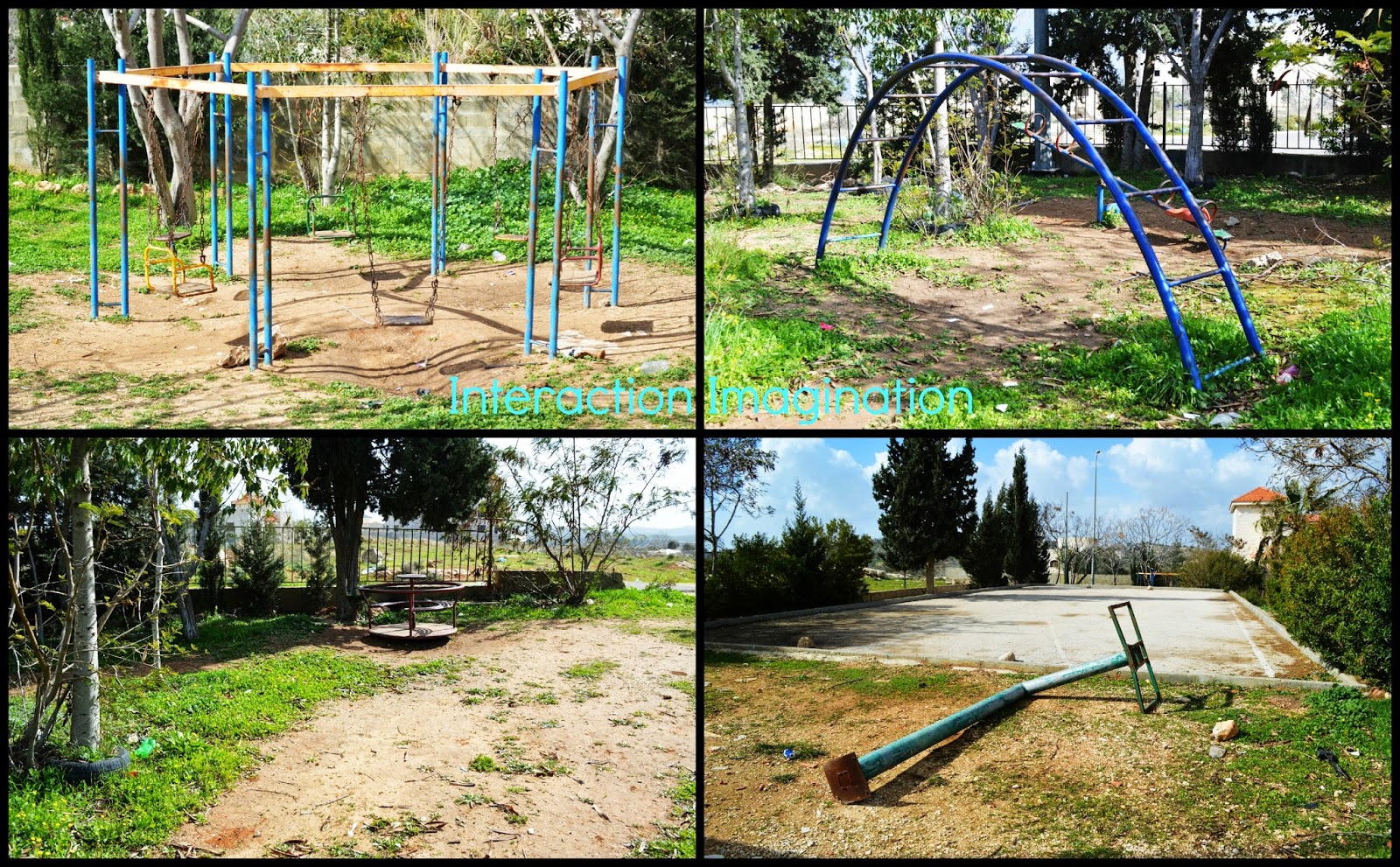 There was an area for basketball/football - which obviously has not been used for some time - there was a spinner (bottom left) I saw these several settings in Jenin. None of the equipment had soft landing space under, but this actually was not my biggest concern (after all soft landing hardly existed in playgrounds when I was a young child either) - I was more concerned about its ghost/skeletal quality - a playground devoid of play - no children and a huge sense that play was not being valued as something important. 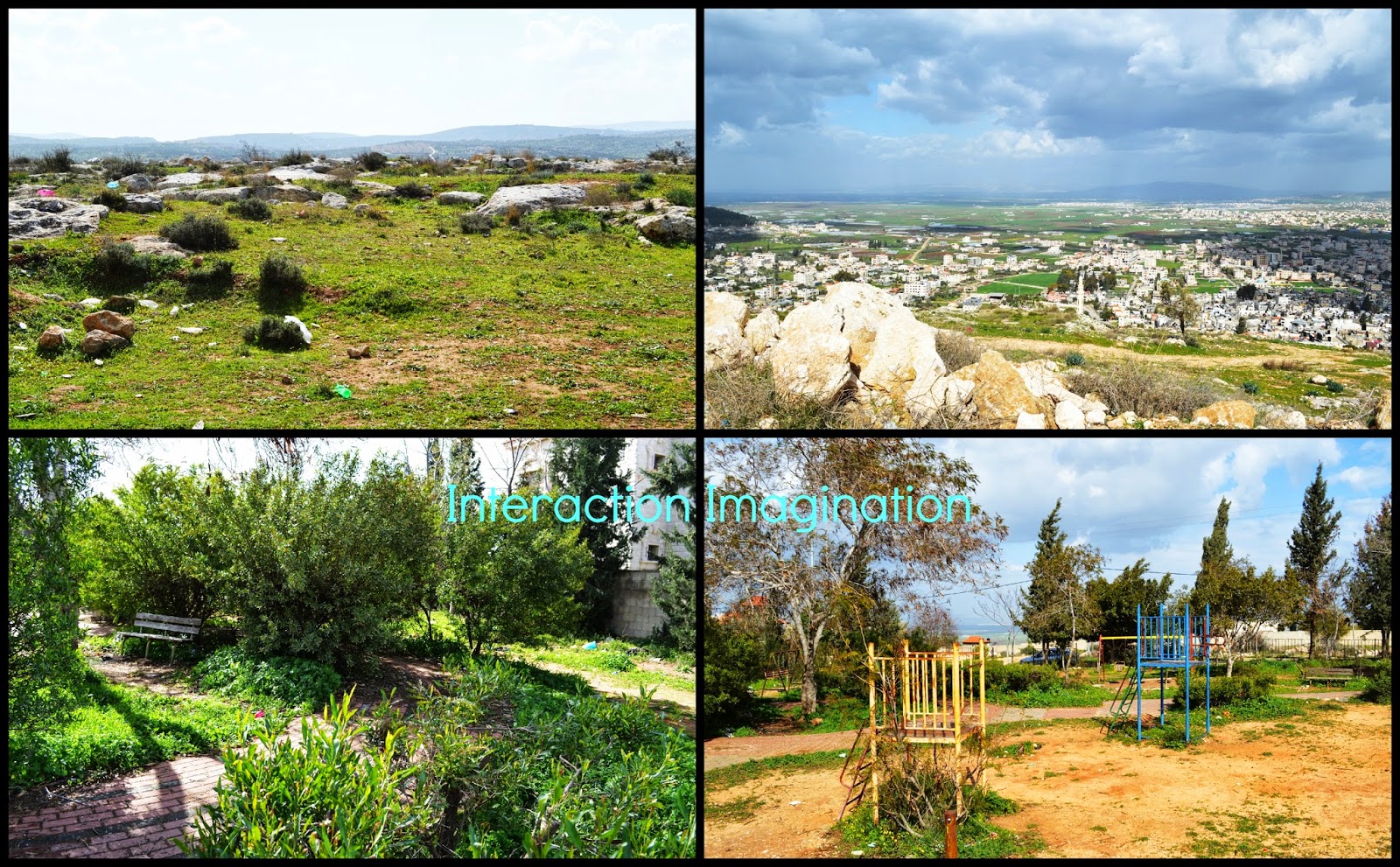 The location of the playground was stunning - an expanse of nature behind the play-space to explore and have picnics, and in front was an amazing view over the city of Jenin - and Nazareth on the hill across the valley (so it was a hike, or a drive, to get to the park) - the park had beautiful trees and plants to play and explore in… perfect for hide and seek - but also so that quiet corners could be found too. The space has FANTASTIC play potential. Potential for children's gross motor skill development, for their understanding and appreciation of nature, as a place for social interactions.

Imagine if it was possible to set up a system like we have in Sweden - a Parklek (click on the link to learn some more) - where the park is staffed with play workers to support the children in their play, to ensure the play-space maintains a high standard (is not pulled apart/damaged or littered too much) - and becomes a place for families to enjoy play together, a place for children to feel safe and to play - and also a possible excursion destination for kindergartens and schools to experience a playful hands-on learning through team activities and other games?
Is such a dream too big? Can such a dream happen for the children of Jenin - and for children living in similar towns around the world where play is no longer seen as important.


a collection of ideas for outdoor play and learning from various locations around the world
Shade - I include this as many forget the importance of shade - not just to repent you getting sunburnt - but also the neurological impact it has…
Outdoor water Play - maybe more difficult in a place where water is a premium, but it does rain in Palestine too.
The many hops of hopscotch - the idea that sometimes the simplest of play-space equipment can offer you enormous amounts of play and learning potential… this could also be drawn into sand/mud/earth with a stick
Children Learning together - Iceland - this post shows that play does not require a great many things… a place space can be made of recyclables - this post also clearly shows how much learning happens through play… and maybe the children do not always see this as learning - they see it as play… it is STILL learning.
Parks and Play in Stockholm - I am slowly visiting various playspaces in the Stockholm area and documenting them - here could be elements of ideas for a possible play-space


Then there are ideas from elsewhere… for recycled play areas…
How to build a playground out of recycled tires
Playgrounds made from junk
Is this the perfect playground, made from junk?
Kids don't need fancy toys to have fun - just junk

So there is potential for creating exciting play spaces - but how to do this in a place where there is junk scattered all over the place - and probably not safe junk at that - how do the children learn the difference between up cycled, safe play junk and dangerous junk? Do the children need more investment in their play-spaces to be shown that they are valued members of society? Do they need a cleaner look to their play-space for it to have more value from all the empty spaces that tend till fill with junk and rubbish of various kinds and aromas?
At the moment I have absolutely no answers - just a million questions - and a longing to understand a city so that play can be injected in a meaningful way… so that the context is right.

Do you have any ideas?