This is the title of a book that has captured the imaginations of my group of 3-5 year olds - so much that they have wanted to turn it into a theatre. So yesterday the children divided themselves into two groups - those interested in making sound effects and those interested in making the background scene - and as if by magic the children neatly divided into two more or less equal groups (seven and eight).


We checked the colours in the book and made many different shades of pink and purple - discussing which colours we needed to create the colours - and how different shades were created. I showed them how we could create a brick pattern to see if this would encourage the children to think about how they were applying the paint. Then the children dipped their sponges into the paint and got creative - a few of them did continue the small brick pattern that I had started, others copied in their own way - while others had a greater need to explore the paint and sponge experience - including driving it back and forwards like a car. My colleague who was with me felt a little stressed that it wasn't going to plan and needed reassurance that it was OK for the children to experiment - I mean technically it was my fault for not allowing the children time to explore the sponge and paint technique before hand - if I had allowed each child time to experiment on their own piece of paper prior to creating the cellar walls then maybe more children would have been able to focus on creating brick patterns. 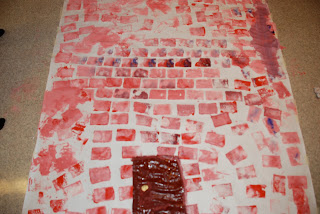 After the wall was completed the children enjoyed washing their sponges under the tap and seeing just how much paint was hiding inside the sponge! Half the group had at this point painted for long enough, half wanted to continue - this is where they decided that a door would be necessary - which they decided that two of the children should make - one did the outline, another filled it in with colour - they decided red-black was the right colour for the door and a golden handle.

The sound effects group had a ball of a time creating sounds for a princess, walking down cellar steps, a spider, a skeleton, a janitor with lots of keys, a frog and a troll. My colleague, Niclas, recorded all the sounds and commented that it was a VERY long staircase down to the cellar.

We then sat down and wrote our manuscript - and without the aid of the book this time, they recounted the story and I wrote down their words - which I read out to them at intervals. They all selected their roles
We have 6 princesses (all girls, despite the fact that I had said all parts were open to everyone and that boys could be princesses and girls could be trolls etc), one spider (boy) one janitor (girl) two skeletons (boys) two frogs (boys - although one of the girls had considered this as her role earlier) and two trolls (boys), one child decided he wanted to be the audience.

Today we practiced our theatre. First I re-read the book and our manuscript and we talked about the differences despite it being the same story - we talked about how books and films are often a little different (or sometimes VERY different - the Dragon Trainer is one of those films).

The spider showed how he scuttled across the floor on all fours, the skeletons jumped up and down - and explained it was because they were cold, the frogs hopped and the Trolls moved menacingly across the room roaring. Then all the children got up and were asked to all walk like princesses as they had been shown (I wondered if they all would... and they all did - no problems for the boys to act as princesses - my heart leapt for joy), then they all scuttled like the spider, jumped like the skeletons, hopped like frogs and moved like trolls - every child was SO proud when ALL the children was moving like they had shown. It was one of those moments that just worked better than I had hoped for - you could see that all children could accept to be all the roles, that self esteem had a little boost and that there was so much joy in the room as they experimented with their bodies doing the various walks.

We then did the theatre. I read aloud their manuscript and they acted out the parts joining in with the words where they could. As soon as they were finished you could feel the satisfaction in the room. I asked if they would like to do it again - and there was a HUGE cheer. This time we filmed it.

Afterwards we showed the children the film and there were discussions of turning it into a film instead of a theatre - and since our rooms are not so big and the children want to show their parents, this might be a better option - especially as many children get stage fright in front of many adults. So now there is a buzz to create costumes, to add the sound effects digitally and also other special effects as Niclas has the equipment and the know-how to give the appearance that the the whole room is made up of the brick painting that we made...

Email ThisBlogThis!Share to TwitterShare to FacebookShare to Pinterest
Labels: gender, in the atelier, role-play/theatre