What happened to play?

I have been talking with my 12 year old daughters about school breaks and what they do then - it turns out that they don't do much as most of their friends play games on their i-phones or are watching the latest installment of some TV series. My girls do not have i-phones which means they get to WATCH others play.

I remember when I was that age - well between 10 and 14 there was an awful lot of playing going on a break time. (There was plenty of play before that time too!!)

Very often we role-played together - instead of watching TV programmes we acted them out, developing the story-line to suit our thought processes. In my early teens break time was consumed by running around the school with walkie talkies in teams looking for clues we planted for each other and trying to catch each other for more clues (although I have no memory of what it was we were looking for) - the school was big and had many ways around it so the walkie talkies made it easier to collaborate to catch the other team. We had come up with the game ourselves and defined the rules ourselves. It was also great that we had a long lunch break - over an hour. My girls get 40 minutes break including the time they need to eat (once a week they get 55 minutes) - this is not enough to allow them to develop their play together.

Right now my son is sitting with his arms crossed and his bottom lip pouting - "what! you got such a long break - that's not fair - I want a long break too". His lunch break is 50 minutes including eating time.

Michael plays at break time - building, role play, bug hunting, exploring - football is not popular as he feels that the boys that are good at football don't care about passing to everyone and only care about winning - this makes it boring "as even my own team take the ball away from me". In Michael's class the mobile phones are handed in at the start of the day - they are in "mobile daycare" as my daughters say. They wish there was a mobile daycare for all the i-phones in their class too.

Is it because Michael is younger that there is more play during his break time? - or is it due to the mobile phones limiting the play? or maybe even that the breaks are too short?

How detrimental is it that my 12 year olds do not have access to the play that I had as a child? Should I be worried for their future? If children are glued to their phones during school, what do they do in their free-time? When are they playing? Are they playing? What do we mean by playing?

Sure, we might need to redefine what play is - for me this blog is a kind of play - my brain gets to play with thoughts and ideas. But often our image of child's play is that of children interacting with each other, with nature, with their toys, with art - child's play feels creative, free, natural. I think this is why there is often the feeling that computers, nintendos, i-phones and the likes do not feel like "real play" because they are designed and made by adults, to be played in a certain way - and there is certainly not a natural feel about them... do we need to redefine play? Or do we reclaim play? 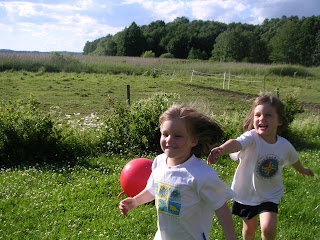 I want to reclaim play,  for my children - to give them the time, the space and the opportunities to play. I want them to keep in touch with their inner-child.