This year, like last year, we had plan A and plan B... plan A was a fairy celebration outside at the edge of the local forest... so we could do all our fairy activities in the forest and also on the grassy area at its edge. Plan B is the same activities, with small adjustments, indoors in the preschool if the weather was rainy... as this is a day for the children to wear their wings... some with bought wings, others with wings made from paper, paint, glitter etc made at preschool - non of these wings would fair well in the rain... especially the home-made ones.
We had also made an enormous orange from plaster of paris (round a balloon mould) that even though I had tried my best to seal it and make it water proof (ish) I knew it would more or less dissolve in the wet... the ornage was an important part of the fairy theme, as this year we took our inspiration from Elsa Beskow's picture book "The Sun Egg" - where a fairy discovered an orange for the first time lying in the forest and mistook it for the sun's egg. Eventually they discovered that it was a sun fruit and drank the juice inside by pushing a grass straw through the skin.

This was something we wanted to emulate in our celebration... and as it was raining, and had been more or less all week... we went with plan B.

While the children had a song meeting, two of us set up the fairy celebration so that when they had finished singing we could shrink the children with a pinch of fairy dust as they walked into the the magic forest where the giant orange was...
The children were amazed and even more amazed by the fact they could suck real orange juice up from it!! 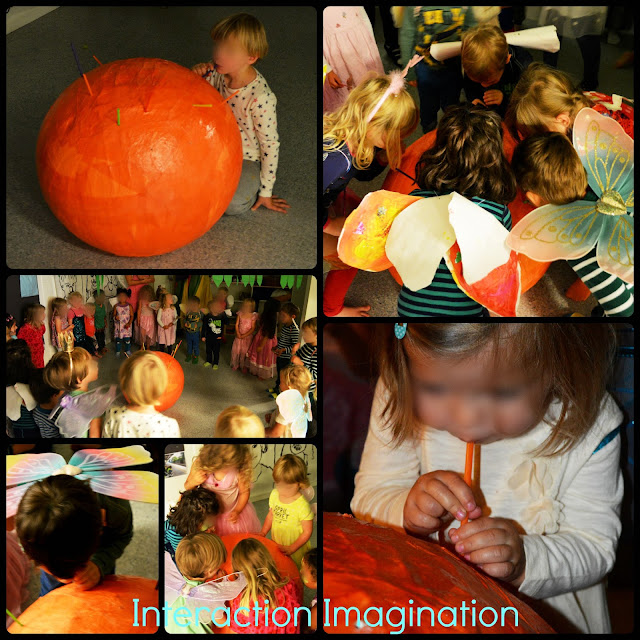 During the morning the children would return to the forest and take a few more gulps of juice...

At this point they also received a magic wand - filled with grapes... a fruit snack to keep them going. And as they munched on the grapes the children were presented with all the fairy activities...

In the atelier tha children could paint a magic forest with seven different kind of green. A chance to be a part of a together painting as well as explore many shades of green. They could also paint a fairy house and corks. If this had been outside it would have been a big plastic sheet fixed between two trees for the children to paint on... it was fabulous last year as the children could see each other through the plastic and the sunlight poured through the colours and made it all magical... 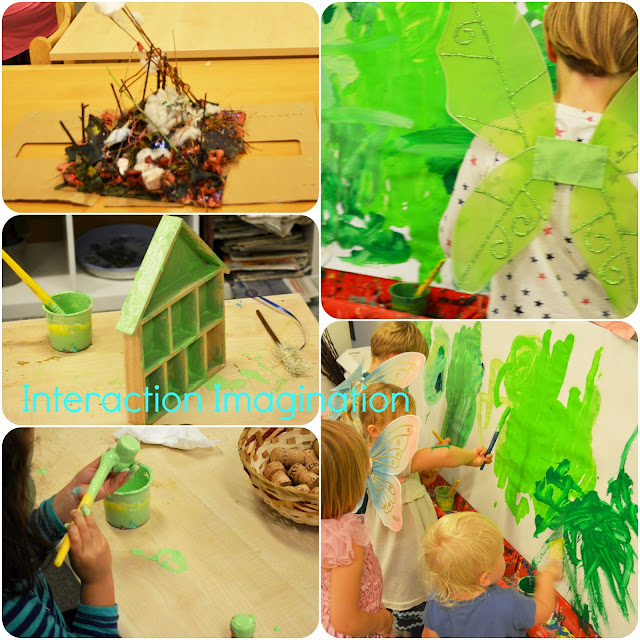 Fairy tea in the fairy tent...  Here the children slowed down.. their language changed and there were lots of please and thank yous and could you pass the tea please... as well as trying out nature's fairy sweets... homemade sweets made from dates etc... no sugar! beautiful tea pots and tea cups to create a magical feel... and magic tea that required imagination, otherwise it just tasted of water... 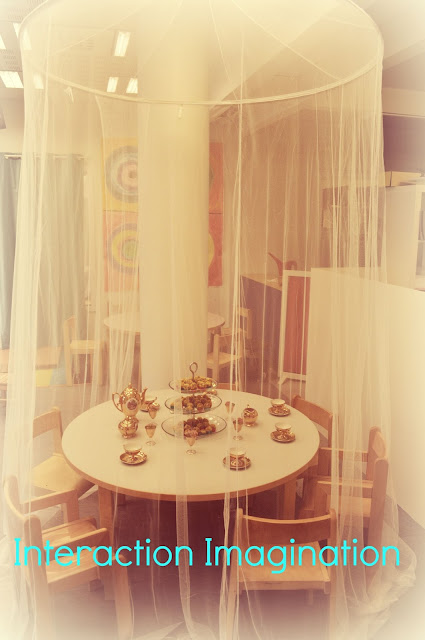 Fairy wand making... a choice if stick and then there were pens, glue, glitter, wool and ribbon to choose from.. the children were free to decorate their wands... great fine-motor skill training. Had this been outside the children would have found their own sticks in the forest first. 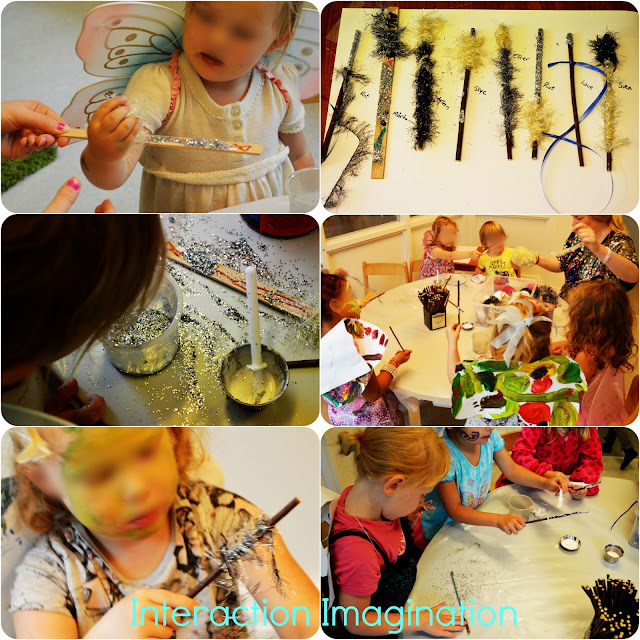 Fairy face painting... we kept it to natures colours... greens, yellow and white so that faces could be designed with a nature feel of forest fairies. A wonderful way to paint and explore their own faces. 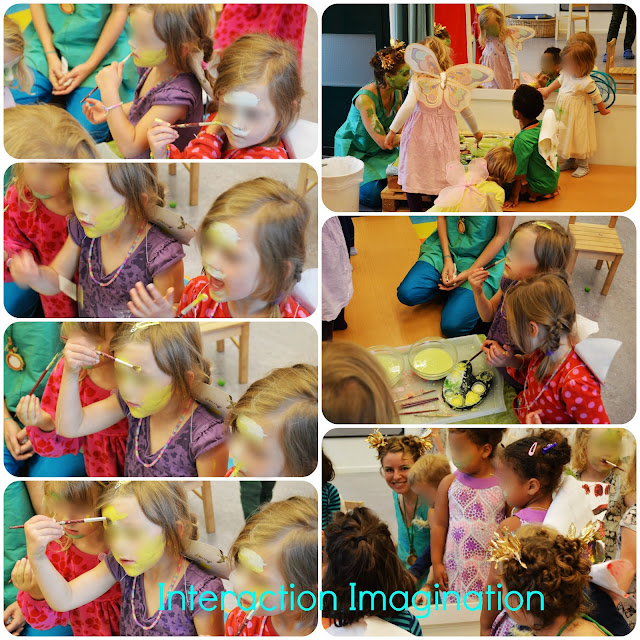 Fairy dancing - with magical fairy landscapes prejected onto two mosquito nets hanging down from the ceiling... there was also an overhead projected on the wall above a bouncy mattress so the children could pretend to fly in the magic light. This was amazing to watch the children venture into the landscapes and play with their shadows and with the light. There was music playing with a magical feel. The younger children mostly explored... the older ones (who have explored this before, danced). If we had been outside the dance was to be on the grassy area with bubbles being blown to make it magical. 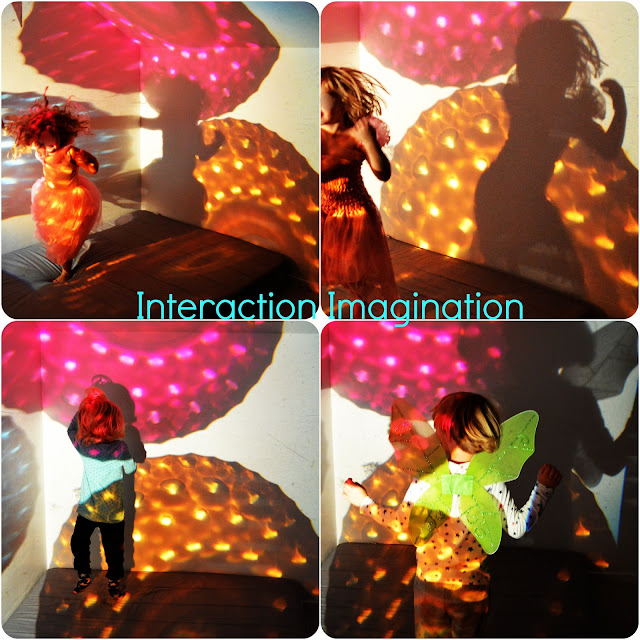 Fairy potion making. Lavendar, flowers, plants, juniper berries, bicarbonate, vinegar, coloured water - plenty to mash, whisk and mix to create magical potions... plenty to talk about... what are you making, what magic will it do.. and why?
If this was outside the children would have had the chance to collect more ingredients themselves to add to the potions. 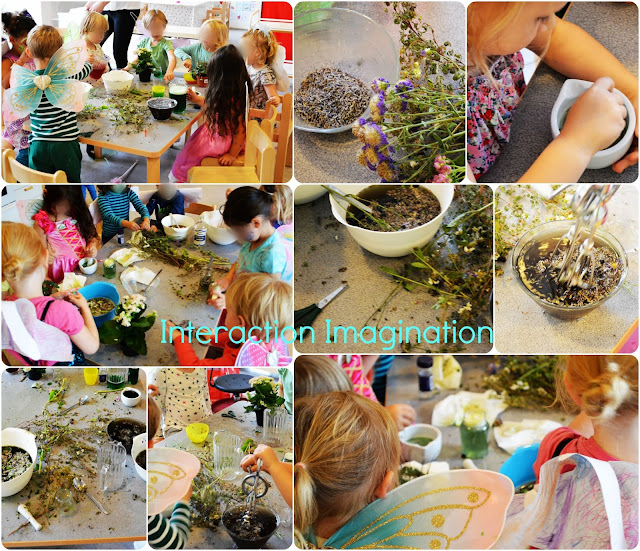 The fairy morning flowed beautifully... and as we rounded off to prepare for lunch I moved the orange back to the staff room so that there was space for the youngest children to sleep after lunch... one of the children watched and suddenly exclaimed "Its not a real orange... you have been fooling us" with big wide eyes!!

My group of children headed outdoors for just over an hour of outdoor play in the wet... wings left inside... but pretend wings on!

On Monday I will be sharing some images of the fairy tea party with the children... not only from our celebration but from those shared in the International Fairy Tea Party facebook page from around the world. So wonderful to be a part of this celebration of play and imagination shared with others who believe in play as much as us!