The International Fairy Tea Party is next week and to get us into the mood for our Elsa Beskow "Sun Egg" inspired Fairy Tea Party we went on a sun egg hunt in the forest. I also thought that we could turn this into a maths in the forest session too... so ten oranges and two baskets were needed. 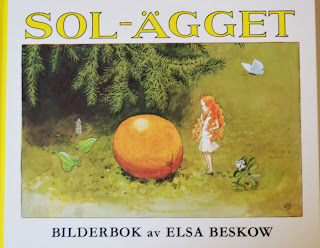 It gave us the opportunity to work out how many oranges were left to find, which basket had the most oranges which had the least... if one basket had three and the other had four, how many in total do we have...? The children were totally engaged.

While my colleague read the story to the children, sitting on the sun stone (a big rock in the forest bathed in sunlight) I hid the oranges. Most of them were on the ground, behind trees, in the blueberries or close to a rock... I tired to get them higher up, but the branches were just not working with me and the ornages kept thudding to the ground... I managed with one tree... just not the one in the photo - that one plopped out of the tree shortly after taking the image!! 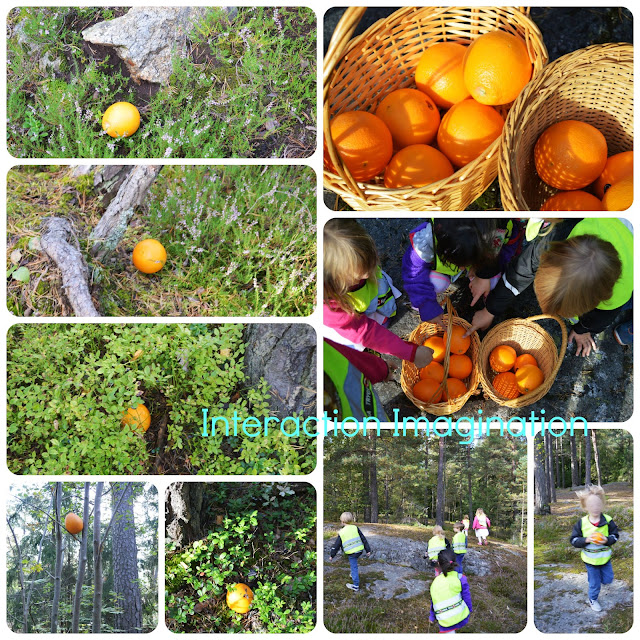 The children were eager to get going - and the first seven ornages were found fairly quickly - the last three were more of a challenge and the very last one even more so... the one up a tree. The children kept walking past it all the time. In the end I gave them some clues... and with some team work they managed to get it down from the high branch (easy for me, who is rather tall) but quite tricky for them.

The children then thought it would be a great idea if they took it in turns to hide an ornage for the rest to find. This went quite quickly except for one child... no-one could find it... despite clues being given. In the end we asked the child to show everyone where the orange was ... and the child could not find it again... it became a BIG mystery... where could it have gone... did some animal come and take it? So we decided to let the orange be and use another one for the last two children to have their turn... as we returned to the sun rock I suddenly spotted something orange... and exclaimed I could see it... the children rushed to my side, looked, and the orange was retrieved. We had a good laugh... it was exactly as the child said... behind a rock... there were just so many rocks in the forest!!

We shared two of the oranges... the rest of them were saved so the children could take a sun egg home with them.

Then there was just over an hour left for free play... the children dedicated their time to blueberry picking and eating... and tree climbing... lots and lots of tree climbing. We talked about surface... if the surface under and around the tree was hard and rocky then the children should not climb too high, as any fall would be bad... but if the area under the tree was soft and earthy then they could climb higher. We also talked about making sure the branches felt sturdy before putting their whole weight on them. The children learned a great deal about risk assessing today. They also challenged themselves with how high they could climb... there was a great climbing tree where one child climbed so high that she gained the attention of all the blueberry pickers so that EVERY SINGLE child felt the need to climb that tree...

"its a great view from up there"

There was also a swinging tree where the children hanged and swinged and did various tricks - lining up to take turns. 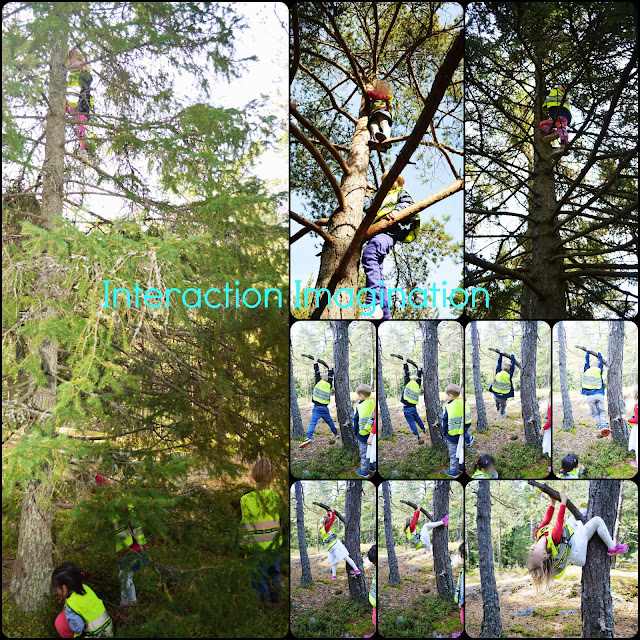 It was a good day in the forest.
Posted by Suzanne Axelsson - Interaction Imagination at 21:06