The wonderful thing about leaving the city centre and visiting a setting in a small town/village just outside Stockholm is the sheer amount of space children and educators have at their disposal for outdoor play and learning.

The last 4 years I worked at a setting that did not have an outdoor space of their own - so the whole community became ours... play-spaces, the local square, the forest, the streets etc etc... and with all the pros and cons of that... actually this would lead me nicely into a post about the BRIC project conference that I attended in Gothenburg in mid June... so I have a feeling that will be my next post...

But this one is about the outdoor area of Överby prechool...
since they had been working on the sensory needs of children inside they had also brought this element into their outdoor space.

A massive space they had at their disposal, to design and develop... and then across the street was the forest for even more adventure... jealous... yes... to have that amount of outdoor space to play with is something I have never had access to, since I have worked in a city centre all the time... sometimes with a decent size space that could be developed... and at other times a mircroscopic space with very limited possibilties (and some have been so small that it was actually a smaller space than some of the rooms we had inside!!!!)

On the wall of one of the corridors inside was a long piece of paper showing a time line of the plans the educators, children and parents had been involved with over the last year or so involving the development of their outdoor space... so it was possible to see what had been discussed, what ideas had been shared and what had been done... and photographs of the joint efforts of educators, parents and children making changes to the space.


As you see below the space is BIG. 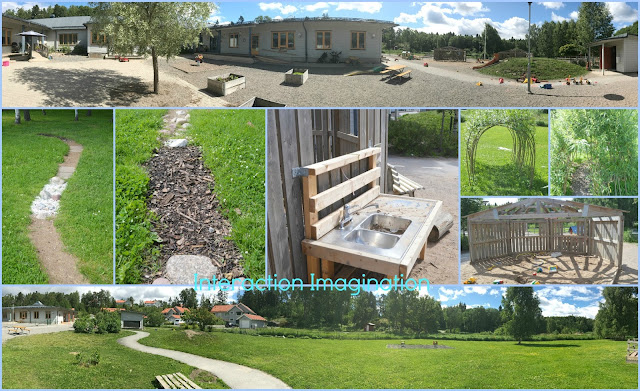 The recent adds has been a barefoot path, with different surfaces, a mud-kitchen, which they had been required to have fixed to another structure as they were not allowed to have it free standing (which I found quite strange since I have seen mud-kitchens elsewhere in Stockholm, in preschools and in public spaces that have not been required to be fixed to a structure). They had also constructed a willow den and a willow tunnel - to create small spaces within the large space they had.

They had a path cut through the grass for bikes to be ridden on, several places with raised vegetable/flower beds.

They also had a section that was fenced off for the younger children, with a connecting gate. This was to allow the younger children to explore at that own rate and not have the older preschoolers always charging through their play and exploration at full speed. 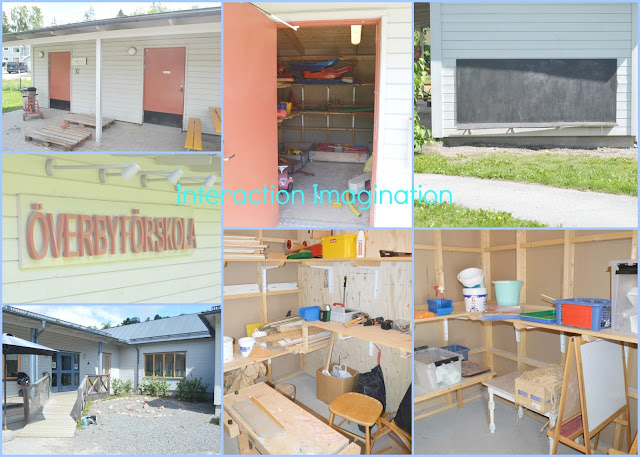 There were also sheds where materials were stored - from bikes to sleds to balls and buckets and spades - and two more sheds - once used as an outdoor art studio, where art materials could be easily moved into the garden area, or used in the shed (weather depending) - the other shed was a woodwork space. On the side of these sheds was a big blackboard for further artistic expression. (the shed were connected - one big shed divided into three spaces, each with its own door).

The outdoor space is still under development... so it will be interesting to see what happens here in the future.
it would also be interesting to see it in action when all the children are there... as most children were already on their summer holidays, creating a a very calm atmosphere with the few children still attending preschool before they too go on their holidays.

if you want to learn more about barefoot paths then check out This Playscapes blogpost as it has links to other sites too.
Barefoot paths can also be done inside - boxes/trays filled with different materials for the children to walk on.
Posted by Suzanne Axelsson - Interaction Imagination at 14:38