Here is the third of three posts about Överby preschool... and I realise as I start writing that there will in fact be another post... to write about the outdoor space... so let's just call that a bonus post, eh?

As I mentioned in the last post about the sensory room this preschool has been designed in such a way that there are multiple ways into a room - this is a great way to share communal spaces and create ateliers for art and for the senses that can be used by multiple groups... the problem with the building design was that alternative routes were not considered - so when the children are in full flow in the atelier it is likely that children or adults will walk through the space to access another room... some children are able to cope with this without any problem... others are not. I also can imagine that of you are in the middle of a group dialogue and the door opens that the chances are VERY high that the soul of the dialogue escapes and maybe not retrieved again...
Eva, our guide for the morning, mentioned that this was a frustrating part of the preschool.
As with life, it is just something that has to be dealt with to the best of our abilities.

There were two ateliers - both constructed in a similar way...

As you can see... there are 4 doors coming into the atelier... so four possible sources of disturbance... at the same time four possibilities to meet up.
There is also a kitchen area, which I think is great in an atelier, I have worked at a preschool before where a kitchen area was a part of the art studio... there is just so  much stuff that can be done with this added dimension of heat - both in the oven and on the stove, as well as access to water. There was no child height access to water here, but a step up to the water in the kitchen area... not used to prepare food, there was a big communal kitchen for that.
Each of the ateliers was set up a little differently, but on a similar theme, there were also art materials in the departments/group areas so that children could be creative with these kinds of materials without the need to be in the atelier per se. 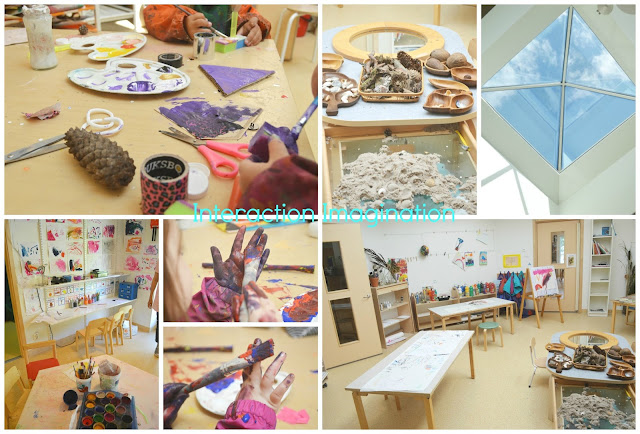 In the middle of one of the ateliers was a longish table filled with paint blocks and rushes and loose parts... in the other one there was sand on a table with natural loose parts... both rooms were central and did not have wall windows - instead they had a skylight as seen in the photo above.

One of the ateliers was in action with the few children that were attending that day (most children had gone on their summer holidays... as it was the same week as the midsummer celebrations) 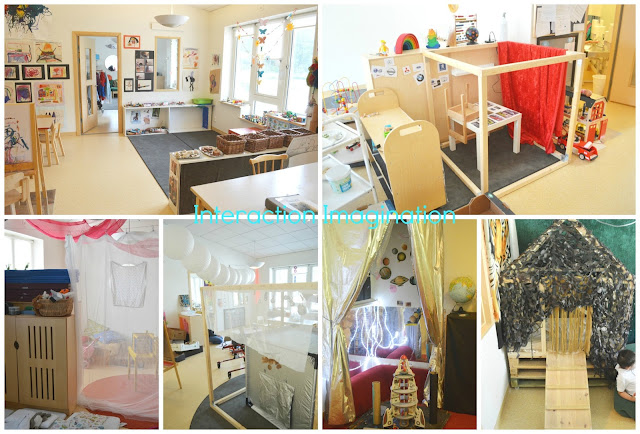 The rest of the preschool was set up with the view to create small spaces within the spaces, with things hanging from the ceiling to divide the space up (as a tall person this means banging my head on stuff if I am not observant).
One of the things I like about Swedish preschools is that it is seldom a group has access to only one room... often it is a series of rooms, and then sometimes communal rooms to share as well - it is not like the classroom system that I see often in USA, Canada and UK etc where one large room is divided into activity stations/areas... or even where 2 classrooms (sometimes more) have their walls knocked down to create big communal spaces that are then used in traditional classroom style with a teacher and the group in each of the original areas... from a sensory point of view we are loading the children with even more input then... 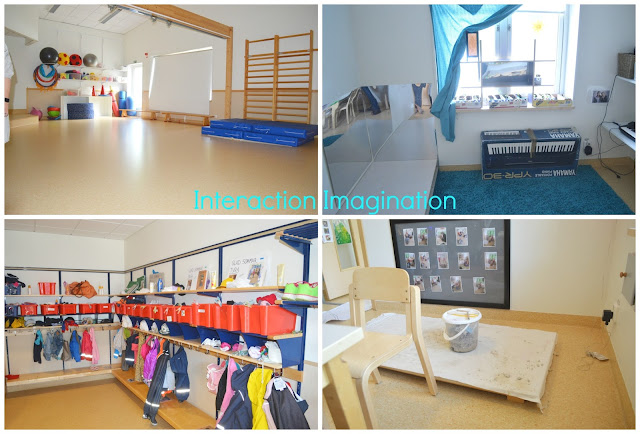 in the top left of the above photo you can see a communal room for gross motor skills... this is a mirror room of the sensory room... it will give you a sense of the size of the space. I love having a room available for children to run around in indoors... just so you can confound that whole "you are not allowed to run indoors" rule... as it is not about indoors v outdoors... it is about being aware of other people and materials, and having consideration for the sensory input that running around has... running creates a high energy feeling in a room, which is fantastic, but if you are feeling overwhelmed it can be too much... so a space for quiet is needed equally as much... and spaces for play in between also... running cannot be anywhere... and sometimes it will be from a safety point of view.
In the above images you also see a room for music and sound which is still under development, a clay-play area on the floor... the documentation behind it is of clay creations to inspire... (by the children)
and the last image is of the cloakroom... the space between the outdoors and indoors... an essential space in Sweden where winter is about 6-7 months long (if not more) and there is a real need to have space to hang all the outdoor clothes as well as space to dry the clothes... as we get wet often!

Email ThisBlogThis!Share to TwitterShare to FacebookShare to Pinterest
Labels: creativity, in the atelier, indoor environment, Preschool Visits, the third teacher