The Art of Learning - part two

I realise now that my intent to write a post based on my presentation of the same name in Nona's studio in Israel is just going to be too big... so I am going to break it down into bite size pieces and make it a whole series...

Today I put together a film that I have been wanting to do since I was in Jenin, but have not had the time to do that until today... and this film ties in so well with many of the things that I talked about with the educators and therapists I presented for in Israel. Their questions of course impacting what I shared..
Here is the film of a collaborative art play

This was the first time that both the advanced and introduction groups worked together... I felt that I had one full day play workshop to offer during my 10 days there, that it would be interesting to offer it to all of them at the same time (all the other workshops were half day). This not only gave me the chance to share more with them, it also gave the chance to expose the educators to how it feels for a child to have so many bodies trying to to the same play experiences or different ones in the same room. How did it differ from the small groups.

The art was the first thing we started with... and also what we finished the play session with before starting a dialogue about our experiences. There were several steps during the day too. The purpose was for the educators to see that an experience does not have to be a one day wonder... that it can be continued and explored in new ways, that it adds to the story, it allows for reflection of what happened before at the same time as focussing on the now... and maybe even inspiring imagination to kickstart and wonder what will happen next?

Some parts were done in total silence... so that the focus was on non-verbal communication... but also to take the time to listen to the rhythm of the art... how do the pen sounds on the paper, how does it feel in my hand... by taking away the verbal noise the participants (child or adult) develop a new relationship with the materials.

Also my choosing that certain materials may only be used in specific ways is part of the process of getting the participants to think about why do we use some things in certain ways, why can't i do something different... but also to encourage communication (either non-verbal or verbally, depending on the stage of the play/art) to learn about taking turns, about negotiations about the needs of others and also their own likes and needs. Most had no problem sharing and shared many times, one person did not share as there was full focus on what she was doing... these were all things we could discuss together and learn from... how did they make us feel... that only one person got to use a red marker... what made it special... did it feel as special when you started using it as you expected.

From the black and white with the thin red lines the next stage was colour...

Colours to explore how they mix and change. But also to see how they would make decisions. There were 2 colours in the first colour session with 5 participants... they could all freely choose their colour, but they had to stick to that colour with that paintbrush... they were given one brush each... so it meant swapping to change colour... and also change thickness of the brush...
Only one chose yellow... despite now being allowed to verbally communicate there had been no reflecting together about the impact of four taking blue (there was the same amount of blue as yellow, and when the paint was gone it was gone) - so of course the blue was finished first and only thr person with yellow could continue... those with blue did not need to swap brushes, now there was a big desire to swap, but no motivation for the yellow to do that... except for being an understanding friend...
it allowed us to explore the need for planning, for communication with others, for problem solving... so much learning in this art play... just because of how the materials were presented and the directions.
I am all for free artistic expression too... I am by no means suggesting all your art sessions should be done in this way... but this is a great way to support the children you work with to practice their planning skills, their communication skills, their problem solving skills in a safe, creative and enjoyable manner. Some participants might need more scaffolding during the session than others... the second group with the warmer mix of colours did not end up with the same problem all all but one using the same colour despite it being a larger group... this group communicated before they started.

It was interesting to talk about different techniques afterwards... how some painted freely over the previous marks, others were influenced by the marks and coloured them in or followed them... and others painted things - like a house... despite the challenge being to not paint things but to feel the movement of the paint and emotions they were experiencing.
Some moved all over the paper, while others stayed in the same spot.
So much for me as an educator to learn about my students and how I could challenge, support, encourage them in the future to try new artistic expressions, test new perspectives...

After much play with shadows and other sensory materials we returned finally to the painting to paint silhouettes... connecting their shadow experiences with a new perspective... learning about the difference between a silhouette and a shadow, that was a new concept for some, that they had never taken the time to consider.
And this is in part what this play and art is about... taking time to explore and discover new things.

Here they had to think about their own city - to rethink the traditional shape of a house (with a triangle roof) because those sorts of houses don't really exist.. the roofs are spaces to walk on and live on - as there is not the snow and rain in Palestine that is the case of triangle roof places on the whole (unless they were colonised by triangle-roof rainy countries). So again learning is coming into their art. To collaborate with each other about what they are painting... which side is up and which is down... how many mosques, where are the trees etc etc.

The educators here also learned that the same piece of paper can be used in many ways... it can be recycled... that it can connect to history... with the lines being like archeological finds under the city... the history of the art... like we all have our individual histories and collective histories.

So this is an insight into the art of learning - from the perspective of a play workshop. 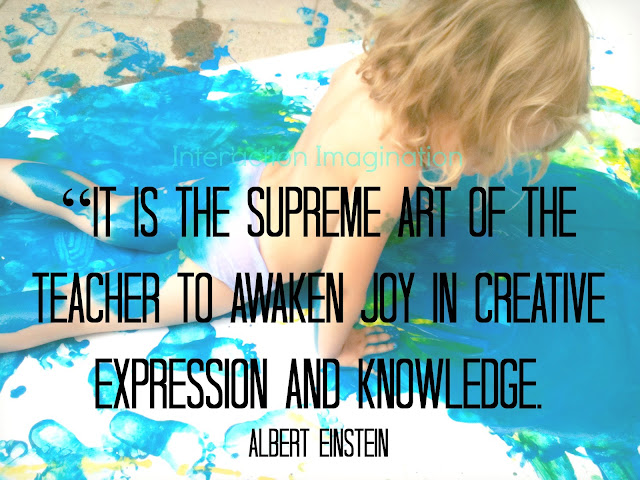