There seems to be an abundance of snow around much of Europe at the moment...

So I thought I would put a few images together of some snow play... and share my snow play from yesterday... in fact I put a whole load of images and films into a a youtube film... as you can see below
Taking lights and mirrors outside into the snow is a whole load of fun... just as taking paints outside is too.
Yesterday the temperatures were -10°C so the snow was light. fluffy and powdery - not good for building at all... but as the snow warmed up inside it transformed and became the fabulous stuff of my own childhood in UK when you can make snowmen and the like... BUT I would like to point out that I actively avoid using the word snowmen now when working with children... why men? Let's make snow girls, boys, women, cats, dogs, snakes... let's not limit the imaginations of what can be created...
I have seen children build rocket ships - building along the ground a kind of floor plan and control panel rather than upwards...

Then there is the communal snow creations of  making palaces, houses etc... of climbing the big snow mounds left behind by the snow ploughs (they are just SO much fun) - then there is sledding and sliding down hills... (in Sweden we wear helmets when on sleds - but if the hills is safe and nothing to crash into, and they slide on their bottoms rather than the super speed of sleds... then I have been known to let children go helmetless) - 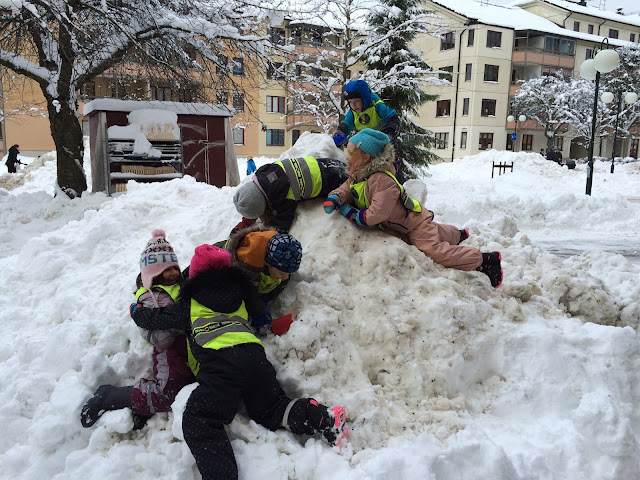 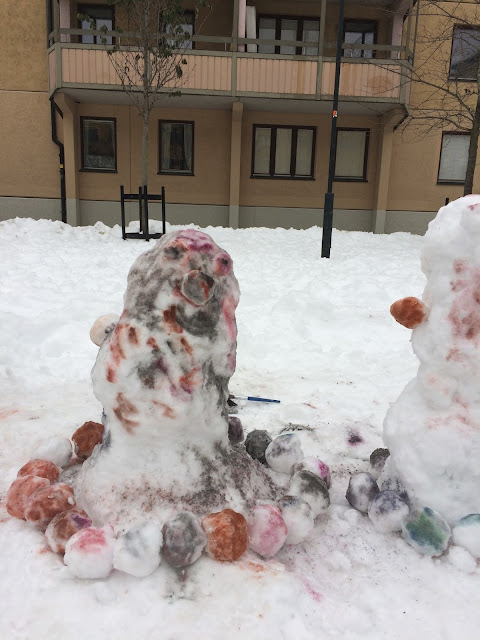 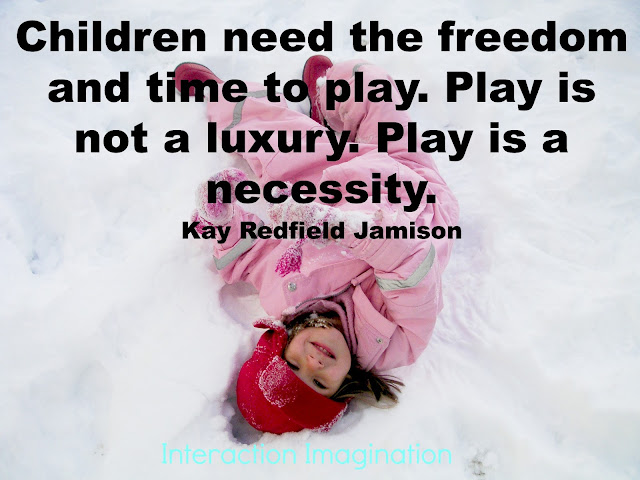 So get out and enjoy the snow

take out paint brushes and colour
mirrors, lights
sticks
sleds and helmets
ice
buckets (and other forms) and spades when the snow can be molded like sand... then you can make blocks for building

make tracks to follow
look for tracks of nature
put paint on the bottom of your boots to see what happens
compare footprints
measure the depth of the snow
take snow inside - to play wit, to paint on, to observe... compare compact snow with loose snow... which will melt first? How much water is left in the glass - even if both were filled to the top?
put snow in a shaded room and in a sunny room... how do they melt

let your imaginations loose... there is MORE...
Posted by Suzanne Axelsson - Interaction Imagination at 13:16