It seems like quite a coincidence that as I write this series of posts about the future of preschool, with a focus on democratic learning and  the whole child, that Sweden has just made the decision that the articles agreed upon in the convention of children's rights is to become Swedish law from 1st January 2020.

So what does this mean for the future of preschools in Sweden... that are already obliged to follow the articles from the children's convention...

I am a very strong believer in the rights of children... well in the rights of all people... but the problem with making this law is that the implications can be rather drastic... or at best might mean little change at all.

I have been reading various articles this morning... and far from all are positive about this decision... not because they do not believe in the rights of children, but because they do... and they feel that this is a shallow move done to please the popular masses, rather than a genuine move to ensure the rights of children. The reason given is that the articles are too vague and leave to much to be interpreted, and therefore the children are at the mercy of adults and their ability to interpret the text. And when I see the massive variety in how the Swedish preschool curriculum is interpreted today that is actually a terrifying thing... there are preschools that do amazing work with children, but there are those that have interpreted the curriculum in a different manner and the quality is far from desirable...
The critics wish that children's rights are protected by more relevant laws, laws that support children in a Swedish context based on knowledge gained from experiences here in Sweden (and elsewhere).

So how will it impact the preschool and the school of the future... this new law?

Well article two is about that children should not be discriminated against and article three is about ensuring the best for each child...
Just in these two articles many preschools (and even more so schools) are going to struggle upholding the law - as a mother of autistic children I can see the difference between a child that receives  what is best and one that is not for the best... one of my children has received the support she needs cognitively (she did not get adequate support in her previous school socially - as there was a great deal of homophobic slurs penetrating the school atmosphere... as well as sexism racism etc... and despite the school trying to intervene, these were more events than genuine work with the social climate) - my other child with autism is forced to go to a school that is ill-equipped to meet his needs - the law in Sweden makes it compulsary for a child to attend school regardless if it is "the best interests of the child" or not... My son is bullied by class-mates, teachers and the system that fails to provide an education that he can access... so does this mean that in 2020 the school is breaking the law? technically they should be following the child convention now - and yet it has little impact on my child and thousands of other children (I am a member of several Swedish support groups for parents of autistic and ADHD children - and most seem to have the same story... and the tragic part is listening to the stories of these parents in international groups... this is a worldwide failing to meet the needs of children..)
I have worked and visited preschools over the years that have also failed to meet the needs of these children... and this idea of equal value is such a surface thing that I sometimes want to scream. it is nearly always about making the "different" child understand and adapt to the norm, and far too seldom about supporting the whole group to understand and adapt to each other... to expand the norm and to create a real inclusive environment where all are really equally valued.

Don't get me wrong.
There is so much good with the Swedish preschool. There are many many amazing educators working with children - to support the children in the learning, development and being a part of our shared world.
but we also need to recognize the fact that preschool and school is an institution, this I have written in my last two posts about the future of preschool (all links at the bottom of the page). Preschool is primarily an institution to provide a service for the parents... and within the walls their are educators fighting and working tirelessly for the rights of children... their right to be seen, to be valued, to play, to learn, to their identity etc
But if we want to create a place of democratic learning we need to accept the fact that far from all children choose to attend preschool or school. We can attempt to make it as democratic as possible within the walls - we can even try to knock down those walls somewhat - but for it to be truly democratic the children would have chosen to be there.
This does not mean that children do not enjoy their time in preschool, by far the great majority that I have ever worked with have enjoyed coming to preschool (maybe not always for the long hours some have had)
When the educators from the teacher training course I held in Jenin, Palestine, came to Stockholm last year they kept repeating, with heads shaking, that it was child abuse to have children in preschools for such long days.
When I did my peer-reviewed reading about quality in preschool (for my masters) I read frequently about the length of time children should have access to early years settings... as it was clear that access was beneficial... but just about all research I read stated that three hours was enough, more than that did not have more benefit and that over 6-8 hours it could be detrimental.
Swedish preschools are open for 12 hours a day... this is to meet the needs of the working parents - not the children.
Most of Sweden allows children who have parents at home with a younger sibling 3 hours a day at preschool... except Stockholm, which used to have 6 hours a day, but now offers 12 hours a day. If research says 3 hours is enough to stimulate a child, then why the extra hours.
Sure, if a child is at risk at home then preschool is in the child's best interest... but should we treat every child as if they are at risk.
In my twenty-five years of working in Swedish preschools I have seen a shift from parents seeing preschool (or daycare before 1998) as a support to their family life to now seeing preschool as a must do and asking permission to have their children at home. For me the children should have the right to be with their parents as their primary caregiver... but for some children with long hours preschool has become their primary caregiver.
Only ten years ago the fashion in Swedish preschools was to take away keyworkers... all children were all educators responsibility... we were encouraged not to create those special relationships that research informs us are so essential in children's neurological development. I referred to Jools Page yesterday and "Professional Love" - but we can also refer to Mine Conkbayir, Alison Gopnik etc etc about the need for genuine relationships for children to feel safe and to enable learning and development.
If we are talking about in the best interest of children - then we need to be investing more in preschools and schools so that the educators get the right training, that the group sizes are adequate for the needs of the children...
for instance my son thrived in his first year of preschool, as it was him, an amazing educator who developed a loving and respectful atmosphere for him and the two other children (three children in the last 3 months of the year)... then he started in a larger group - now there were 20 children and four teachers... still brilliant ratios for children aged 2-6 - and the preschool was ONLY open between 8:30 and 16:30 (it was a parent co-operative and we made the decision that the children came first, not our work) - and while my daughters thrived my son struggled. It was too many people, to many transitions (which had been more of a flow when only 3 children - but are more structured when there are more) - there was too much stimulus.
I think I cried most mornings as I left him there (being brave at the hand over stage - but breaking down half way to work - where I then started working with other children his age... at the time it made no sense... the state gave me money to put my child into preschool so that I could work in a preschool... it would have been nice to have had that money to stay at home and give him the same care and stimulation I was giving other people's children)...

Yesterday I wrote about how philosophy with children created a learning environment that was democratic and respectful, and that the whole week had to meet the needs of the whole child... in other words the philosophy sessions I did with them was not just about verbal communication - it was about communicating with the whole child. But it also taught the educator how to become a facilitator rather than a teacher... that it goes from teacher-centred to child-centred.
The word "undervisning" (teaching) will be introduced into the  Swedish curriculum, where only teachers will be able to hold these "lessons" - in a time when it is difficult to find preschool teachers, and some settings will be in the position of having too few teachers to be able to uphold the quality expected of them.

Other breaking news recently is that there is going to be reshuffling/changes in the school authority and school inspection (they cover preschools as well) - how will a new system be able to support the preschool in transition? Especially as already today, there are far to many setting that are not providing the quality they should be, for a variety of reasons (and mostly I feel it is poor leadership, lack of resources and not possessing the right competence for the situation they find themselves in - and too many people in preschools that have no childcare/teacher training at all - which means that those that do have need to support co-workers as well as the children and parents they work with)

Children's rights are so important. They are something that I strive for in my work... to enable them to see, know, understand and use their rights - and to be able to use their rights wisely and as part of a community, not in a bubble to make themselves feel good at the cost of others. Again this is why philosophy with children is so great... as it is about expressing personal opinions at the same time as learning about the opinions of others and how we are stronger together.

To be honest I am somewhat surprised by this post... I thought it was going to be a big celebration post of children's rights... and in a way it is... I am so happy that children's rights are being valued...
but I want this to be real, to be genuine and that these rights are truly valued and are not simply window dressing. 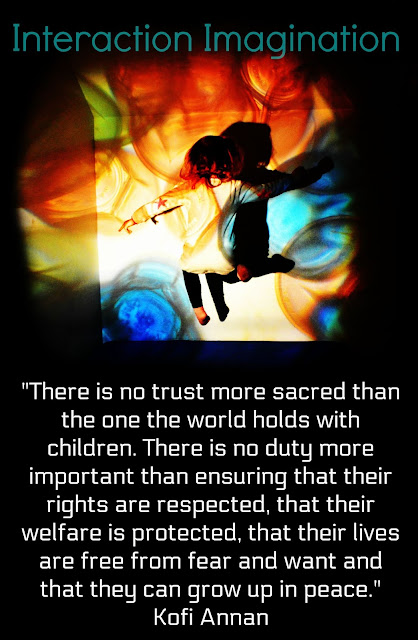 I also recommend looking at my posts about Original Learning... as all this thinking connects to this approach to education... let knock down the walls of current stifled education institutions and replace them with places for Original Learning.
Posted by Suzanne Axelsson - Interaction Imagination at 16:06