We often talk about engaging children in inquiry, learning through projects... but what does all this mean?

what is an inquiry when talking about education?

inquiry means - the act of asking questions... and also an inquiry is an official attempt to discover the facts about something.

What I find is that engaging children means we also need to empower them. Not many children are going to immerse themselves in an inquiry of the teacher is holding too firmly onto the reigns... where is the space and time for the children's questions, the children's ideas... and inquiry means handing over the power to allow the children to explore idea and questions...

this means there needs to be time for the children to...

I found that working philosophically with children is an excellent way to fuel inquiry. it not only allows the children space to participate it also gives the educator time to practice relinquishing power. To learn how to be a facilitator/guide rather than an instructor.
If we want the children to inquire, we need to be handing over some of the classroom power to the children/students.

My work with Gästrike Water Authority and the Board of Children has allowed me to see that this is a method that works with all ages. I have seen it work with preschoolers ages 1-6 - and now with 8-13 year olds. The exact same approach of respect, guiding and supporting the children to participate. It is about scaffolding the children in this process... not just handing them the power, but giving it to them as they are ready... providing activities that allow them to develop the skills and the confidence they need to take responsibility for the direction of their learning - together.
In the last session before the summer the board members evaluated their time together on the board - and they were all really pleased, stating that they were able to learn from each other, that it felt motivating to be taken seriously, that it was not just listening to a teacher talking at them... but here they talked with each other. They all valued that every member in the board could bring something valuable to the dialogue, that they could learn from each other and also teach each other.

My observations of the group saw that the children went from trying to answer questions the way they thought the adults would want them, to offering suggestions and asking more questions and thinking more about where to get the information from. I included a lot of hands-on activities - both experiments and also artistic activities... in part to mix science and art, in part to allow the children to experience water and gain the knowledge they needed for dialogue and in part to create a sense of community... which is so important when it comes to real genuine dialogue. That sense of community, that sense of trust is so essential to dare to explore ideas, share thinking and dare to make mistakes in front of each other as a step in learning and not something to be ashamed of.

David Hawkins "I -Thou -It" is also an essential part of inquiry... the teacher and the learner need to be interested and motivated by the it... the project or the line of inquiry. There needs to be genuine interest. If it is not meaningful then it is not going to be easy to motivate the learners.
This does not mean you have to do lots of mini projects... it can mean that you need to ensure that what you are doing is meaningful... and that it is accessible to all the children... that all 100 languages are being used to inquire, not just a few high status "academic" languages.

Inquiry implies risk. As a teacher you need to hand over power to the students, you are never entirely sure of the direction the inquiry will take - and you need to be prepared for this, be open to this possibility of new direction. It can mean that topics that make you fell uncomfortable get taken up - death etc... and you need to open your mind that the children/learners have a need to explore this but not from your adult perspectives.

I will never forget showing a group of 4-6 year olds some images of places where children sleep around the world... images of luxury and images of absolute poverty - and asked where the children would like to sleep.
The majority of the children chose the image of a scruffy, old sofa outside - to me it was an image of extreme poverty and misery... but the children saw adventure and beauty... I had to hide my surprise to listen to what the children had to say... not to say they were wrong, but to listen to the fact that they could see something I could not. Of course, we did explain to the children about the real life situation of the children that would sleep there, something the children had no knowledge of and had of course not impacted their choice.
Another dialogue about playing war lead to the fact that the children liked that game because it involved physical contact and the children liked the hugging part of the game - they were not fighting, it was a way to explore physical contact - certainly eye opening information for me. We have to always be aware of our own adult bias as we look at children's play... and give space for them to help us understand better what the real learning and intentions and thoughts are. This is why and inquiry is about collaboration... about children/students and teachers working together to discover more.

As educators we need to launch a project/inquiry and see if it is something that will capture the interest and curiosity of the group... once that spark happens it is about enabling the children to keep adding fuel to the inquiry fire... fanning those flames.

With young children we did the research together... it was very much a collaboration, and if we needed to look up information I would do that (as there is some pretty questionable things out there online that I feel children need protecting from) - they see the process, they give me words and ideas of what to look for and I show them the results, once I have checked quickly that they are age appropriate.

With older children then there is more freedom for them to do this part themselves. And as they are writers and readers by this age I also encourage to get in touch with experts - at first together, and as they gain more competence in this skill I pull down the scaffolding for them to get on with it themselves... always close by, but not too close.

Topics that I have found really good for inquiry over the years...
Leonardo da Vinci was great... because he did so many things, from art, to science, engineering, technology, and also philosophy and philanthropy... he thought up ideas that were not possible at the time... which is great for exploring with children with an unknown future ... what will the future be like, what do you think you could invent that cannot be made now, but maybe in the future?
History, architecture, food, language, the whole curriculum was covered... I was hoping for bridges but the children took it in the direction of robotics which we explored with our whole bodies and minds and cross-curricula.
Dinosaurs is another favourite, and with most ages to (my 14 year old is still very much into dinosaurs) again, looking at time, discovering nature, looking at fossils and bones (and thinking about our own bones and how we are made), exploring vulcanoes, comets etc... reflecting on what they ate and how they lived, why some animals survived, what animals today look like dinosaurs etc... then recent films like Jurassic World can get us thinking about what would happen if dinosaurs lived now, how would we treat them, do we have the right to bring them back to life through genetic engineering etc - this is just the start... the children/students can take you in many directions
Local community - I did a "Together on the Square" project with a group of preschoolers, where the children designed a square where we could all meet... this lasted for 6 months and we took the time to interview families, people who lived in the retirement home etc... the children kept rethinking what they needed on the square to make it inclusive for everyone. I think learning about your own local community is important, getting to know the people, and being an active part in it is empowering for the children. Especially the younger ones. We drew a lot of maps in the beginning, before starting to draw plans... their skills needed to be scaffolded... so maps with a route to how they got to preschool, which we had on paper, made into 3D with loose parts, followed to their doorstep. The children learned about each other, it created the sense of community we needed to pursue other ideas, it allowed the children to see how some lived close and others further away, how some lived next door to each other, and that some had two homes.
Magic/fairies etc the realm of magic can be a fun way to explore with young children...and there are many older children reading science fiction books - so incorporating fantasy into the reality around the children allows you to see things with new eyes. The fairy projects (As part of International Fairy Tea Party) has allowed us to re-look at nature in search for signs of fairies and the very small. Exploring magical powers has been a great way to  explore responsibility... if you had a super power or magic power what would you do with it? Books like Harry Potter or Percy Jackson or Magnus Chase would allow you to explore magic and myth in the context of today...
Water is what we have been exploring with Gästrike Water Authority, naturally, and have explored how it is cleaned, our human impact, responsibility, properties, sustainability developing ways to share this information with others etc. As I wrote above... it has been about balancing hands on experiences, with dialogues and facts... allowing the children to share the knowledge they possessed with each other, encouraging them to find out more, and helping them with sources of information when they needed it or asked for it.

In Palestine I presented the educators there books without texts... the idea was that they could be used to provoke their thinking. The books were a spark for inquiry. Looking at the books with new eyes, and not just as a product for a story - but as a source of possibilities. The teachers could see there was the potential to explore and inquire many ideas in the book... the images encouraged dialogue, science explorations, art etc

An inquiry must start with curiosity. You must get the learners intrigued. The group must have a sense of community to be able to work together.

For me this is a natural approach within "Original Learning" the whole child, many langiages, play and learning mixed together.

(links to further reading after the Swedish text below) 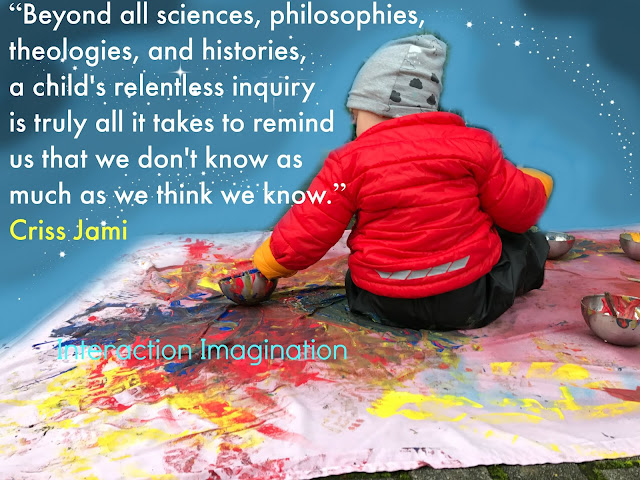 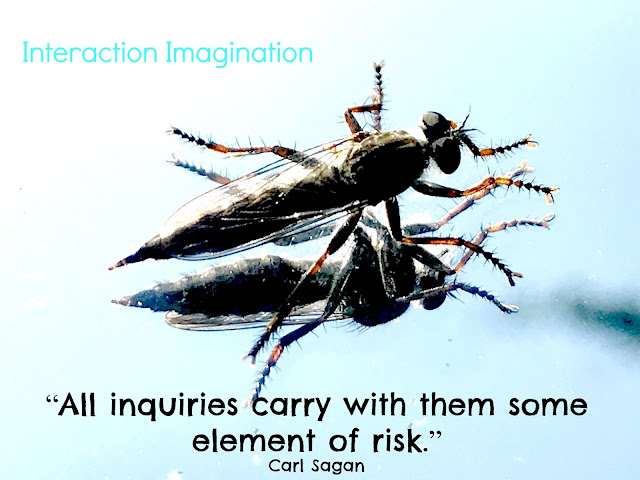 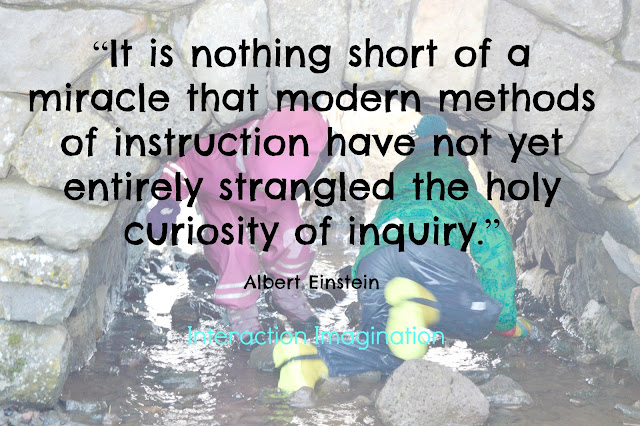 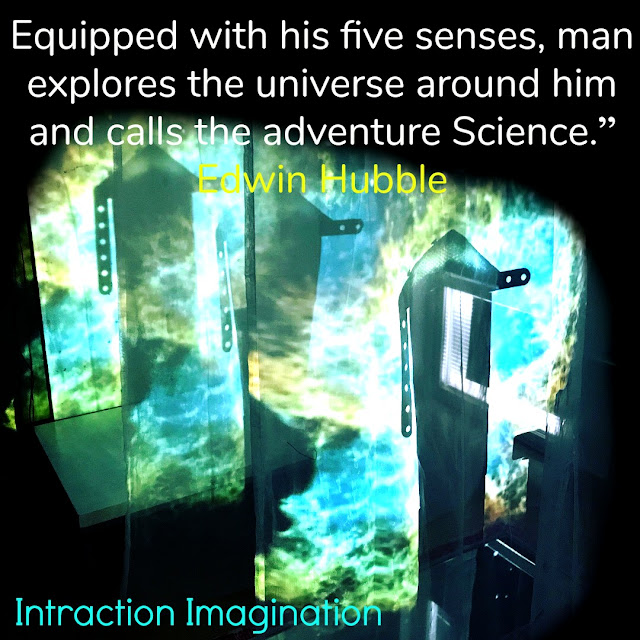 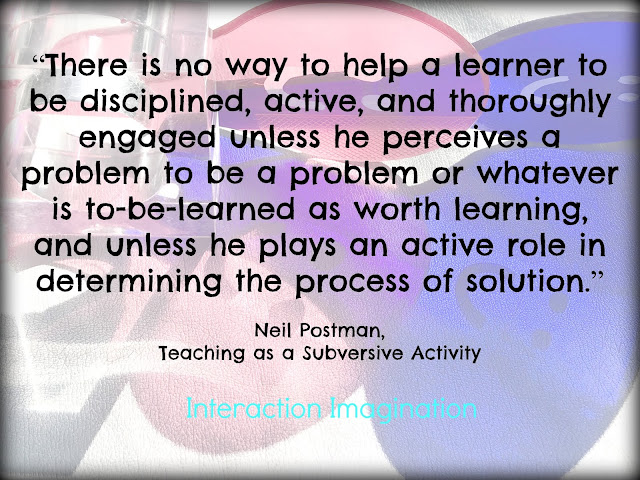 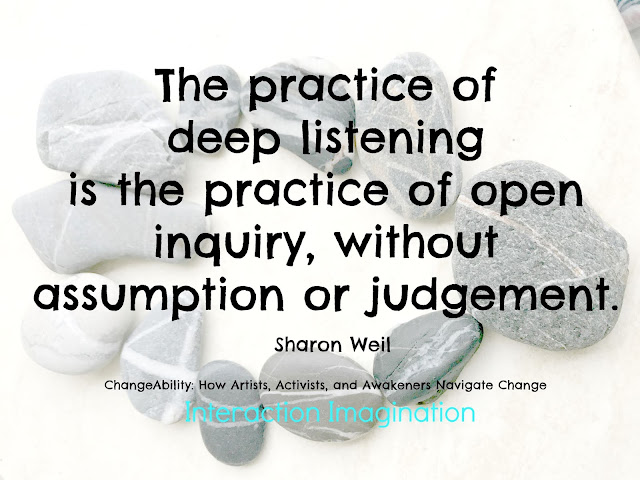