So here comes a wild thought... 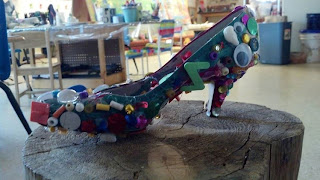 the title of the album was crazy shoe/fairy house...

I completely read it wrong at first - totally missing the fairy house 3 photos later - but I am SOOO glad I did as it has triggered off a whole series of idea with thanks to Fafu Toys who also linked up the photo with the musing of how many others would create a fairy shoe house! So we got "chatting" and thought about setting up an event where children all over the world could put their imaginations into action and upcycle a shoe or boot (or any footwear) into a fairy dwelling.

That the photos of the process and the finished shoe(s) could be posted for all to share and that we do this by the equinox when we could celebrate with a fairy tea party.

Well all over the planet children find themselves in different situations, cultures, seasons, environments, languages... children are united through play, imagination ... and  on the equinox also by the fact that we all share 12 hours of daylight.
The equinox is on September 21st - which falls on a Saturday this year... to make this a fun activity for children in preschool/school (I think preschool at first, as that is my work environment) I thought that we could hold the tea party on the 20th of September.

I have set up a facebook page for everyone to share their processes. thoughts, ideas, inspirations, fairy shoe house photos and also photos of the Fairy Tea Party.

This can be an opportunity for children to play and use their imaginations and for us as teachers to see the learning - and for us to share this with each other...

Do not think that fairy is a girlie thing . take this as a challenge to see how you can learn more about gender, and about what the children think about gender ... and fairies

There are many questions that can be asked to get the cildren thinking and their imaginations rolling...

Since we are being a bit specific here - about creating a fairy house from footwear maybe the project can be presented as a letter to the children asking for help... and that an item of footwear is given (or a selection to choose from) and a request to build a home for some fairies that lost their home due to campers/badgers/racoons/wind/flood etc (something relevant to where you are located)... those of you in the northern hemsiphere will maybe want to consider the fact that winter is approaching, while those in the southern hemsiphere will need a summer house! Or maybe you just want to give a shoe and something sparkly - EVERYTHING is possible and allowed... this is supposed to be fun - and to be as deep or as basic as you and the children want to take it....

If you are posting photos on the facebook page remember to have permission to do that... also use the page WITH the children... which photos do they want posted, what comments do they want to make?
The facebook page I am referring to is
International Fairy Tea Party
and I have fixed it purely for the aim of sharing photos and processes for this project...
if it turns out to be a lot of fun - and rewarding for both children and adults... then we can see where we can take this further in the future... but one thing at a time...


So what do you think?

Do you want to be  apart of something fun to celebrate children's right to play and imagination?
Then come and join in....