I will just quickly write down the children's words...
yesterday they were being observed by 6 adults which, of course, made it much more difficult to focus on the dialogue - as some of the children were more focussed on making contact with all the new people and others were a little apprehensive...

The warm up question yesterday was a reminder of how children think... the question was "what is your favourite place?" and we wondered if the children would say home, or where they had been on holiday, or maybe a favourite place to play... but we were totally taken back by most children's reply (just about all of them) saying the chair they were sitting on was their favourite place.

That reminder of how children are living in the here and now - not yesterday, not tomorrow, not even later in the day... right here and right now they were sitting in chairs in a circle - and luckily they all seemed to be sitting in the place they liked the best in that ring...

As you see, the presence of the people from the theatre also influenced how they answered the question. It might be interesting to ask the question aggain another time, when we have explored Morocco a little more and maybe some other places...

Today's question came after the warm up of "where do you live" again... I haven't had the chance to compare yet, but from memory I see that many of the children answered the same, and a few have changed their answer...

Do you believe fairies exist?

Today two new children have started too, this also affects the dialogue... we kept it short as we could see there was need to meet and play that was more important that the dialogue, but at the same time we were impressed by the length of the answers... it was obvious that the children had started to gather their thoughts and start to string some of them together...


Oh, and here comes an image of The Globe (Globen) in case you were wondering... it is a building that over the years MANY children have been fascinated by... 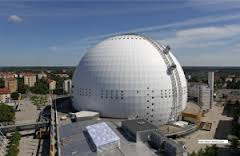