I have finally got round to putting this post together... I have wanted to all week, but there simply has not been the time... and even now I feel I will not be able to share in a way that will do the experience justice... it really was great fun.

It started off on Tuesday where we asked the children "What is Christmas?" - the first answer was about "cars need them to get about" - where it dawned on me that the Swedish word for Christmas (jul) sounds more or less the same as the Swedish word for wheel (hjul)...
Once it was established WHAT we were talking about the children started talking about Lucia buns, pepparkakor, tomten and presents...

Then we asked "what colour is Christmas?"... that was a MUCH trickier question... do you answer your favourite colour or a colour connected to Christmas? Pink, red, white, purple, blue, black, orange and gold were the colours suggested...
Reasons were given as to why they had chosen that colour and the children then could decide whether or not they agreed with the arguments presented. The three colours that the most children agreed were Christmassy have been selected for the magnetic art process... tested out today by one of the group... (this is an experiment for us adults as well as the children!)

White, red and gold are the Christmas colours that the children chose as a COMMUNITY of LEARNERS.

On the Tuesday the magnetic art was tested together with just one child as this is a child that need a little more time one to one for language development it is beneficial to do sessions like this where my words and the child's words can be more easily heard and that there is time to communicate in an undisturbed way on the child's own terms.

It also gave me the opportunity to learn more about how this magnetc art works - and that there was enough paint on the top to be able to lift two images on paper... which meant that the children could work in teams and both be able to print off a paper artwork at the end of it. I like collaborative artwork just as much as individual artwork... to be honest for this age group I prefer collaborative artwork - the focus of comparing their own skills with others is reduced as the children isntead focus on the collaboration - and learning from each other.

I also learned that it would be interesting to put this over the light table, and not just on top of the table (which worked fine). In the second session I looked at the colours briefly without the main lights on... and while the effects were great it did not enhance the colours, and since this was all about the colours, the mainlights went back on again (but I would be interested in doing amagnetic art with a blob of black paint and the room being dark except for the underlit magnetic art - as then it would be ok for the art to be more silhouette like).

Glitter was also added to the extra session (this did not add a great deal to the paper art print... but the effect of the ball rolling through the glitter was really cool... and there was the added learning of how the ball moved different depending on what it was rolling through/on) 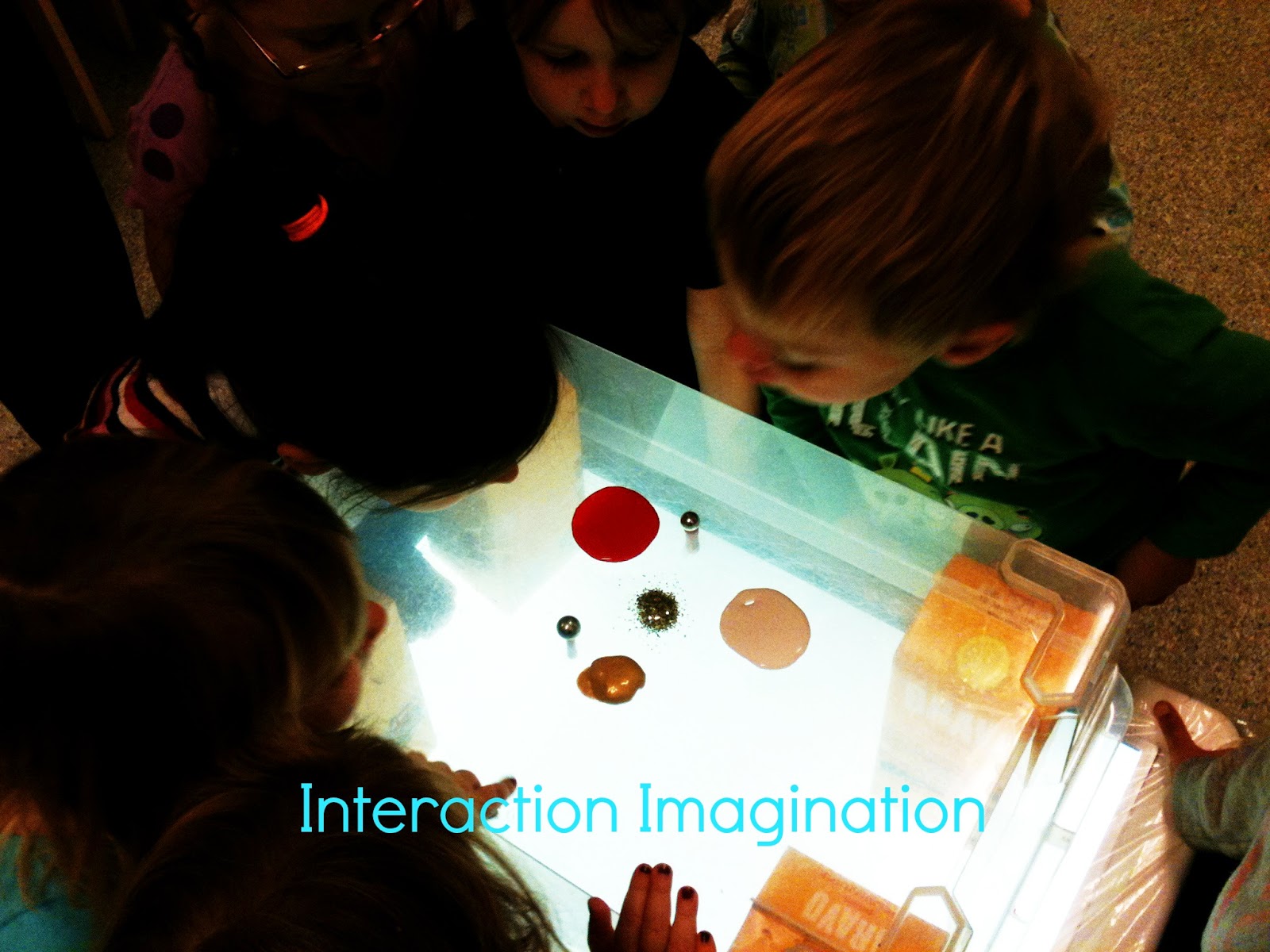 The children gathered round as we introduced what we were going to do with the Christmas colours... the children were immediatly interested in the smell of the paints. 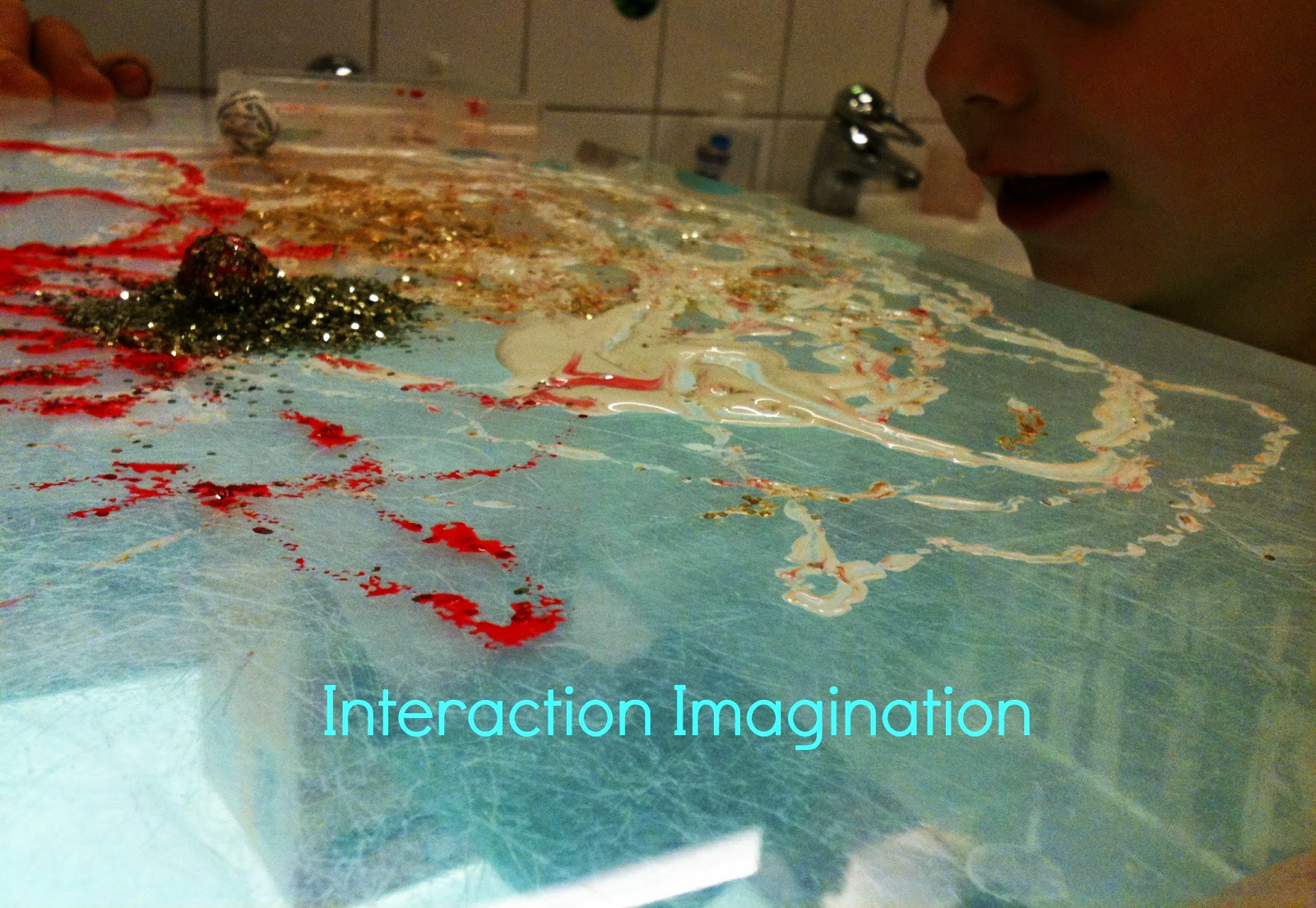 The children had the option of standing, sitting on knees on the floor and sitting on a chair - they could find the position that worked the best for them. Most children found it difficult to direct the ball at first... and some of the paint blobs were tricky to roll the ball through at first... but not impossible, the children simply had to be persistant. Only two of the children found it quite tricky throughout the session - hand and eye coordination not quite working with them, and not quite finding the technique that enabling them to control the ball with the magnet. 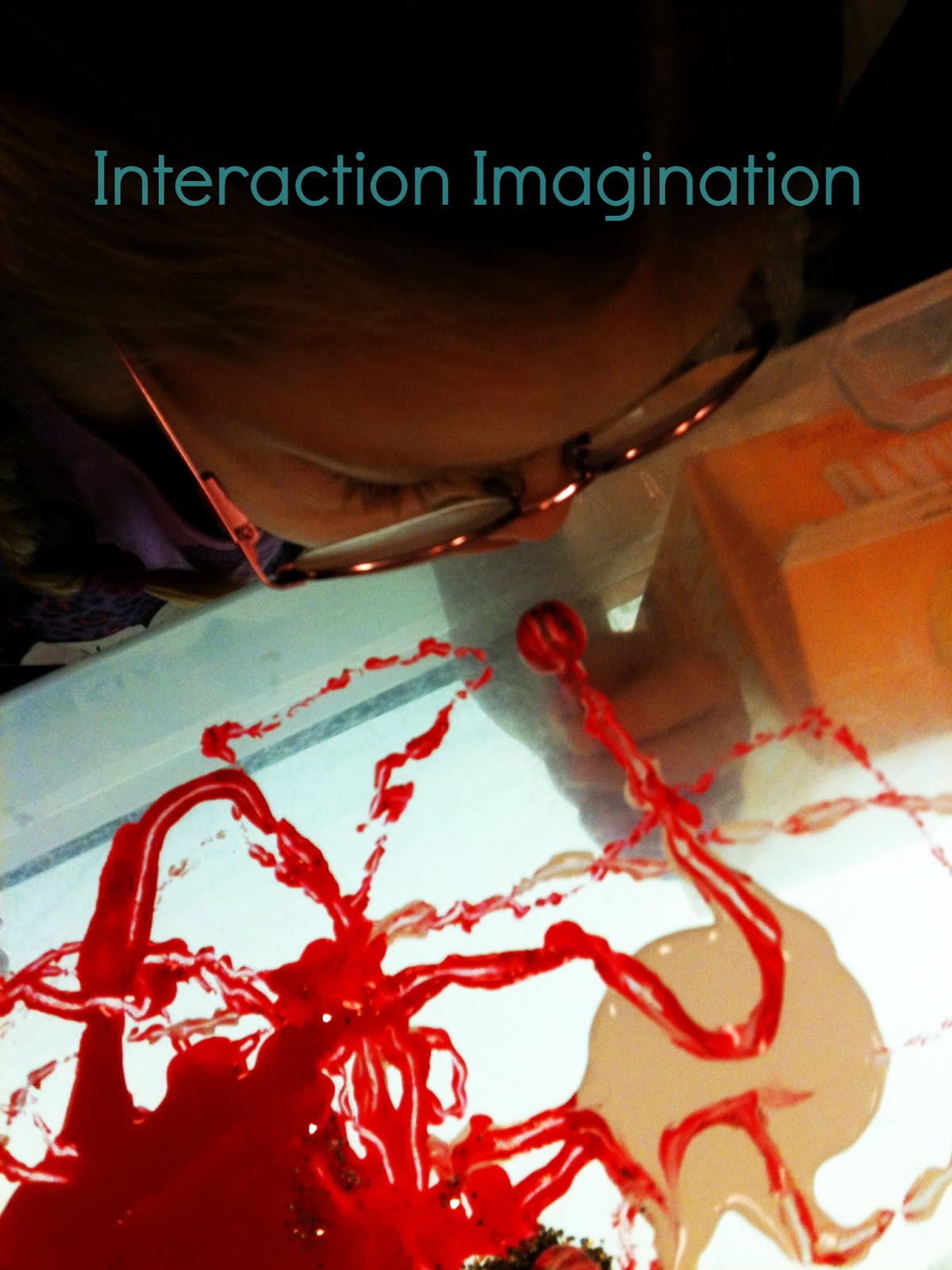 Most of the children spent some of the time getting close to the experience and really watching what was happening. Severla of the collaborations were like role-play sessions - with kissing metallic balls!!

You can see from this short sequence that the children were having a lot of fun. There was plenty of laughing. 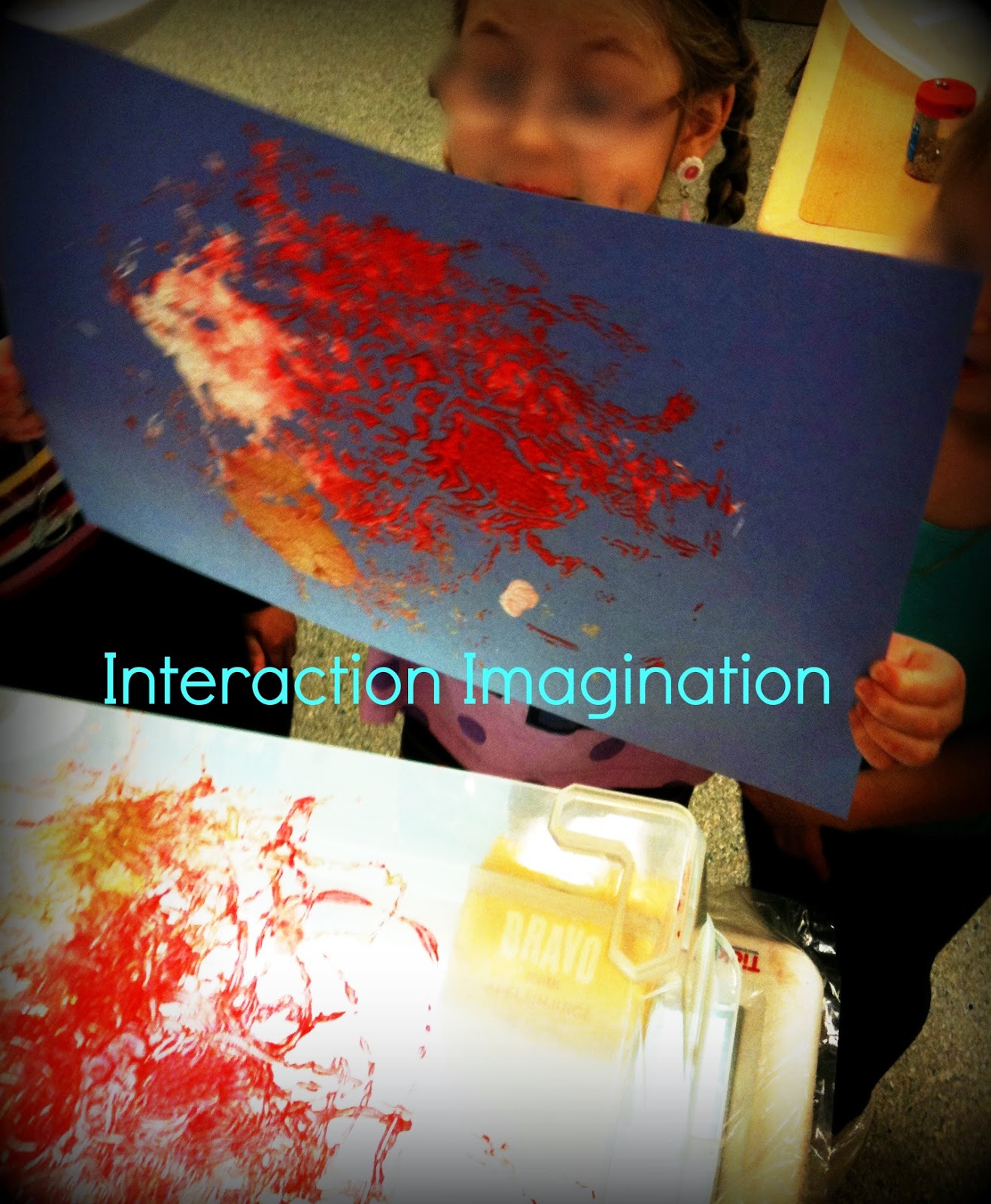 The children chose what colour paper... I helped with this choice in their reflection of how the paints would be visible on the paper. They then placed the paper on the upturned box (a clear box from Ikea upturned over a light-table using empty juice boxes for lift - oh yes, I learend from the first session that the juice boxes should be part-filled with water, so that they were more sturdy). The children stroked the paper, to help the paint transfer, and then lifted up the art captured on the paper... It was rather magical... each child amazed by what they found on the paper. The final works of art...

What I noticed when looking at the photographs afterwards is that it really was  great for fine motor skills. 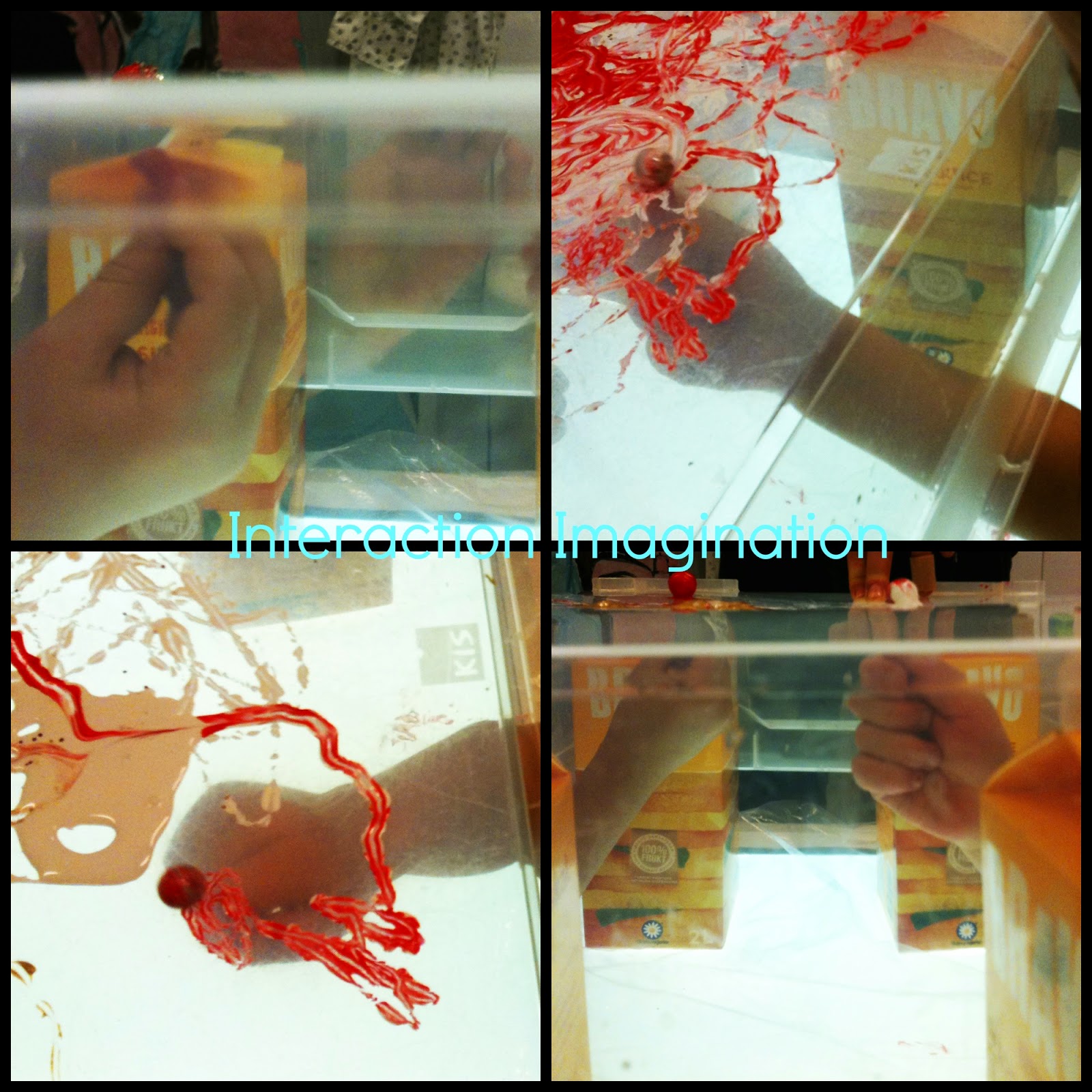