While I was in Iceland there was a dialogue about gender that has got me thinking. One educator was thankful that she had two males at her setting that could do construction/engineering - and this bothered me... why should we be thankful that we have males to do that? In fact should we not be encouraging the females to do these exact activities, so that the young children can see that certain activities do not belong to a certain gender... that in preschools and schools we should be working extra hard on breaking the stereotypes with our actions so that these children can grow up thinking they can do/be anything regardless of gender...

Later in the evening I was pulled up (quite rightly) on the fact that I had talked about my all-girl schooling between 12-15 as something very positive for girls (I definitey found it so) - and how did that work with my thoughts about breaking stereotypes.

It took me time to work out why could I possibly think this...
and I realised that IF I had been to a preschool/school where males and females all did the same activities, that males did not do stereotypical male things like build and engineering and the women didn't do the sterotypical girl things... IF I had grown up in a society where girls were given the same amount of space, if the colour pink was of equal status as other more "boy" colours... if being called a girl was not an insult, if running like a girl was not an insult...
watch this advert to get the idea

IF I felt that, as a girl, I had the opportunity to be anything... then maybe being in an all girls school would not have been anything special... being with only girls made me feel strong... It made me believe I could be anything... I was allowed to take space... but at the age of 15 the school system changed and boys started... and as a 15 year old it was VERY clear that boys took more time and energy from the teachers than what the girls did - suddenly I felt less seen, there was less time for us... and in my class there were a 24:4 girl/boy ratio but boys got at least 60% of the teachers time and energy... and I was nerdy back then - I observed stuff like that. So I always wondered if it was always like that in all mixed schools... do boys take more time and energy than girls... and why?
Because I don't see that boys need more than girls in the preschool groups I have had over the years - so what is happening?

It would be interesting to hear about other experiences of school and whether as girls you felt less seen, less worthy... or as boys you felt more worthy than girls? Because I can have this all wrong...
but you can read  here (gender bias),
here,
here (about gender equitable schools)
here (impact of gender roles on socialisation)
here (a look at the gender gap)
here (education gender gap... lots of articles relating the the gender gap in general)

Schools are a part of society... so this is not something that schools and preschools can do on their own... everyone really has to help so that children can have an image of themselves of being able to do anything they want regardless of gender
Take the time to watch Emma Watsons speech about gender equality

For me it is always about equality... about allowing boys AND girls be able to partake in alla activities, to be equally respected, to have equal opportunities, to have equal value... and we in preschool we can really start this process... but it does need to continue throughout school and throughout the whole of society... so that there is no need for an all girls school to make a girl like me feel strong, powerful and seen.

Reflections May 1st 2018
I have re-read this shortly after attending a talk by Mats Olsson about men in preschool, which partly referred to his own personal journey as a preschool teacher (I will share more about that talk in the coming weeks) It was interesting to listen to him talk about not wanting to represent men, but to be a teacher... just as a female in the branch should not have to represent women, just be themselves and be an educator.
Of course there was talk about the perils of society being suspicious of men working with young children - and the damage this does to the self esteem of male educators when there is a fear for leaving them alone with teachers.
So there is a need to break down stereotypes... to allow men to work in preschools without suspicion, to allow women to work in male dominated workplaces without being bullied or sexually harassed - that boys and girls are allowed a full range of emotions, that we are also inclusive and thoughtful about those who do not define themselves as either male or female - in other words we do not have to be so definite in a binary system of what is male and what is female... but allow people to be the human they are.
We need educators, male and female to break the norms, to explore them, to widen them and to help create preschools as a more inclusive place for all genders - for those that work there and those that attend... adults and children alike. 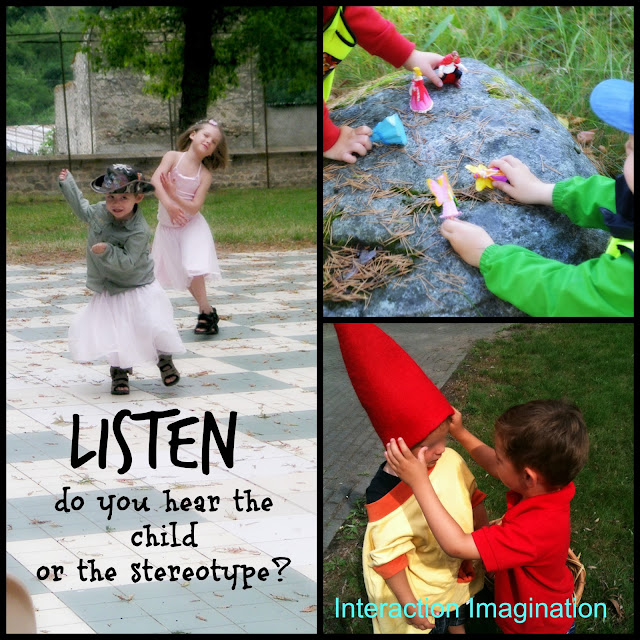