It seems very obvious that I should choose to write about the sleep section of Deborah Stewart's book
Ready for Kindergarten. I was sent a copy of the book as a part of participating in this book study.
All opinions expressed are my own, with some support from my sleep researcher husband. 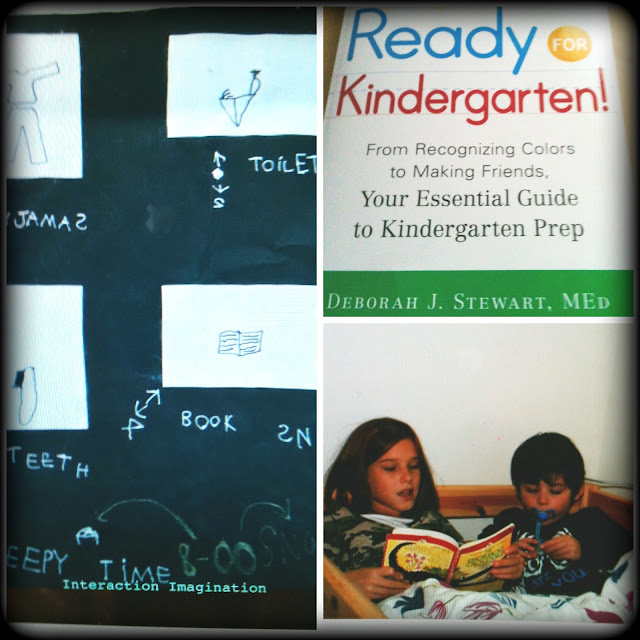 The book has also allowed me to see the differences between what is expected of 5 year olds in US about to start Kindergarten and five year olds in Sweden who will have another year left of preschool before starting a preschool class/kindergarten year at age 6 and then finally starting school at age 7. It has made me very grateful that I live here in Sweden, where neither children, parents or teacher's feel pressured to think about that phrase "what children should know" which is used throughout the book.

Things like knowing how to distinguish between the girls and boys toilets for young children is completely foreign to me now that I have lived in Sweden for 20 years - there is no real need to separate them in an early years environment - and children will, of course learn about reading the signs in real life when using public restrooms with parents. AND there is no NEED to ensure that children should be able to read/write etc before starting kindergarten/school here in Sweden either - instead we support a child's interest in this - and as the children start later here in Sweden there is ALWAYS some interest (some more than others) so that most do start with  number and letter literacy based on their interest and readiness.

BUT since in the USA there is an expectation that the children "should know" many things before starting kindergarten then it is useful to have a book to help parents to support their children in a playful manner - and THAT is what Deborah's book offers. From learning how to use the taps to wash hands and being competent to take care of of their toileting, taking care of their bags and coats etc to their fine motor skills, gross motor skills and their developing cognitive skills...

Chapter 18 is about sleep, nutrition and exercise and I have been trying to work out whether it's placement at the end of the book is a good thing or not - should it not be the MOST important part of the whole child's development and therefore the very forst thing mentioned - as learning is SO dependant on the child having good sleep, having the nutrition to fuel learning and excerise to help with sleep and motor and cognitive skill development - EVERYTHING is dependant on chapter 18. BUT there again, maybe the last chapter is the right place to have this information - as the last resounding words of how to support your child's learning.

Having a good going-to-bed routine is important - and sticking to it is equally important - and this can be done TOGETHER with your child. For example my son DID NOT like the fact that bedtime came with so many instructions -
"put your pyjamas on"
"clean your teeth"
"go to the toilet" etc
He felt as if he was lacking control in his life so we made a bedtime chart - there were four elements that needed to be done before bedtime - toilet, teeth, pyjamas and story/cuddle - he drew pictures of each scenario on small paper (or you could cut out images/photos of each stage) and he then got to glue them in the order that he wanted to do them. This was then fixed onto his bedroom door so that instead of telling him what to do I could ask him "where in your bedtime routine are you? what do you need to do next?" It took so much stress out of the bedtime routine as he felt in control of it. Whila at the same time I enabled him to get into bed and get enough sleep (Fridays and Saturday nights have always been nights where we could push the time limits a little, although rarely both nights when they were younger - and we ALWAYS ensured that nights before preschool/school were always early). 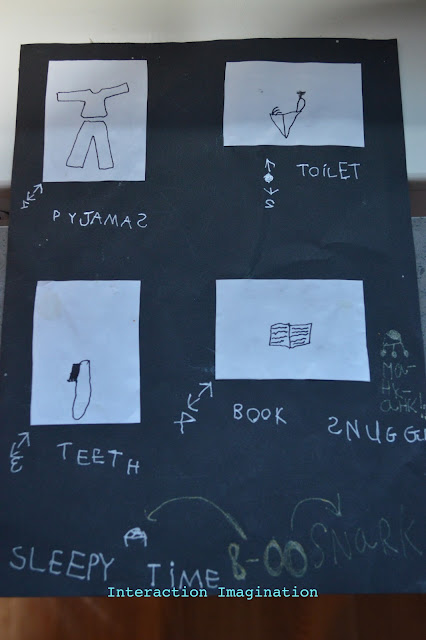 It is also important with a fixed time - and even though you are probably not going to get them into bed exactly at that time every night you do make sure that a sleep routine is being established.

My husband believes in naps and rest for 1-6 year olds (well for everyone really) and if the kindergarten is NOT providing an apportunity for rest after lunch then it will be even more important to ensure an early bedtime for your child's emotional and cognitive development.

Having plenty of OUTDOOR exercise is also important for healthy sleep - ensuring that the body is exposed to sunlight to help with the biological clock - after all, all the artificial lighting and screen time will effect a child's (all people) sleep rhythm. Blue light - found on screens (TV, Computers, i-pads etc) should be avoided before bedtime as it stimulates the brain instead of helping it to wind down - having a bath, reading a book, or listening to a story will help with the winding down process so much more...

Jesper Juuls writes that there is a huge difference between what a child wants and what a child needs and that parents DO need to empower themselves to realise that THEY are responsible for ensuring the child's needs are met - even if this means it is not what the child WANTS! Bedtime is not always a desired thing amongst children - there are just SO many exciting things to play and test and explore - and while a parent might think that they are allowing their child to be competent by choosing their bedtime, it is not a good thing to allow children to sleep less than what their body needs - it will result in the children becoming less competent as their tired nature will mean they will emtotionally reeact to situations instead of having the enrgy to react with thought and consideration; it will mean that your child will not have the same focus to learn during the day as the child will be tired.

It would be different if youur child did not have to follow the kindergarten routine (or school or parent's work routine) to rise early, and was able to sleep later in the morning to ensure the adequate sleep - then the child could be offered more choice into bedtime... BUT when Kindergarten etc dictates a starting time to the day - you have to work out what time do you need to get up to get there on time? and then to work from THAT time backwards to ensure that your child is getting adequate sleep (10-12hrs).

Even is many parts of the book "Ready for Kindergarten" by Deborah J Stewart is not as relevant for parents of children who start school later and obviously do not have the same demands on what they should "know" before starting as American children have, there are many elements of the book that are useful - not just to parents but also for preschool teachers. Plenty of suggestions about how a child's motor, cognitive and social and emotional development can be supported in a playful manner.

Take the time to pop over to The Teach Preschool page by Deborah to not only see her explanation of the book but also to access the links to all the other blogger who have been focussing on different chapters with their opinions of the book and their experience of testing out the activities found in the book - it will give you a clear idea about what the book offers...