Last week we made the desert part of our Morocco inspired fairyland - and I thought we were going to be making the sea... but a conversation with some of the children lead us to creating the sky instead... since fairies fly, not swim!

Our group name is "Vinden" (The Wind) - so I thought it would be fun to incorporate the wind into our art creation...

The idea was to use mini fans to blow paint across a layer of sugar water, I also had some straws to blow through - and selected the children who had not painted last week, to expose them to a creative session - as well as a couple chosen due to using straws - as it is great mouth gymnastics to help with pronunciation.

We started with the layer of sugar water - each child allowed to dip their fingers in the clear liquid to taste... and the suprise in the eyes when they tasted it was not water... It was later described to another teacher as fruit juice!!

As you see above - I was a little frustrated by the fact that the brushes had not been cleaned properly before and that one of the brushes "bled" red paint... ho hum, its the way it works sometimes, and I just had to use it as a learning example of the importance of cleaning brushes properly afterwards...

Three different shades of blue were added to the paper and sugar solution - and we started to blow and use the fan... the min-fan was of no use whatsoever - it just didn't move the paint at all... but the straws did - even though we had to blow hard. And if you blow hard for a while you get a bit dizzy (I soon discovered that as we all moved around the table blowing and blowing).
I like it when we are standing doing art like this, as it encourages the children to move around instead of feeling they have to belong to just one part of the art. I noticed in this session that they are now really getting the hang of not keeping to one specific part - instead they move and flow together in and out and sharing each other's experiences. 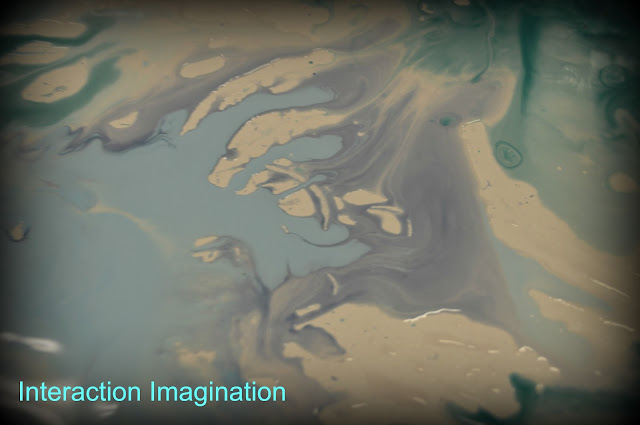 We soon discovered that either the table or the floor is not entirely flat and that there is a slight angle which meant everything was slowly flowing down the paper and drip drip dripping off the table into a nice sticky puddle!
I put a bucket at the end of the table and just hope that it was not all going to flow off the paper!! 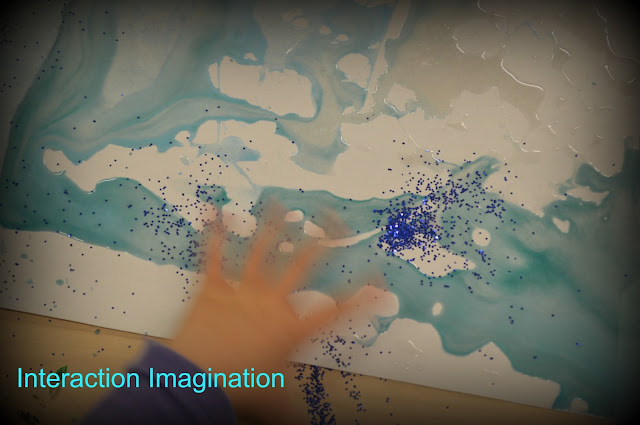 In the afternoon we returned to the atelier and decided it need some fairy glitter to make it a bit more magical - as it was still wet, we relied on the sticky property of sugar and just threw handfuls of glitter onto the paper - like glitter rain! Seemed appropriate since it was the sky. 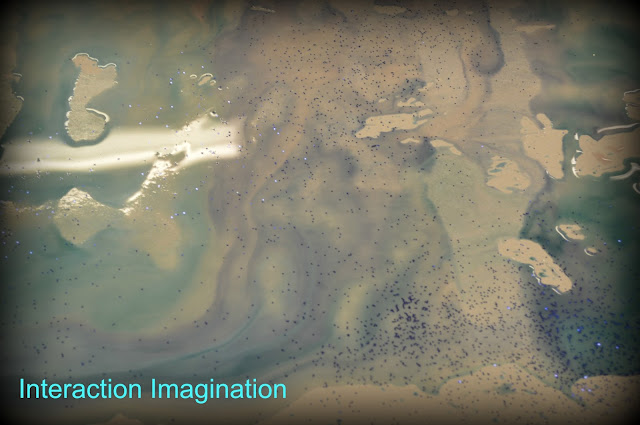 EVEN later in the afternoon we saw that it was not dripping anymore but that there was a big puddle of sugar solution in one corner... so we experimented again - "shall I lift the table and make it drip?" A nod back... and a few lifts later... 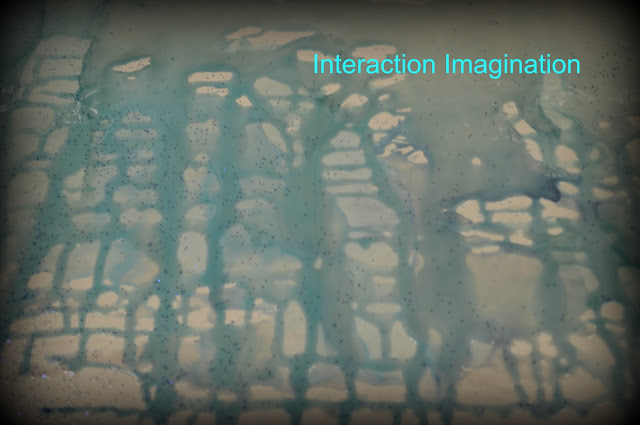 and then our sky looked like this... more rain than clouds...

BUT it should dry sometime this year now at least - LOL

Well this did not turn out like I expected... I was really hoping that the fans would work - but I have not given up on that thought yet... just have to rethink - and maybe just thin water paint to roll over greaseproof paper - or some other paper and not use the sugar solution. Maybe the fans and black ink or water colour would make some interesting winter trees?

The children enjoyed the process, it was three short processes as blowing through the straws was pretty intense and can only be done for a short time.
Do I feel satisfied? Yes and no...

Well that's it for now. I am interested to see how it looks tomorrow - whether it has a nice glossy look from the sugar - or whether we have sugar crystals instead...
Posted by Suzanne Axelsson - Interaction Imagination at 19:41