Tomorrow I start the first session of BUP (Barn och Ungdoms Psykologer - Children and Youth Psychologists) together with Michael - the next ten days there will be many visits with the psychologist, social worker and doctor to try and find out Michael's diagnosis - although it is looking rather like aspergers. BUT for his sake we need to  get a diagnosis so that we can ensure the school provides the education he has the right to!

There is no doubt that Michael is bright - and he shines at anything that captures his interest - sadly school has a tendency to teach in a way that does not entice Michael to learn. There is too much sitting still, there are too many other children to distract him, there is too much boring repetition instead of learning in meaningful ways.

If it had been legal to home-school here in Sweden I probably would have done for Michael - his sisters are much more in tune with the rhythm of school - they can play the music - Michael though is often out of tact, and this causes problems, for everyone.

It hurts in my heart to see him struggle to "be good". He is a nine year old boy who stands as tall as a teenager and has the social skills of a 4-6 year old - with the same impulses, the same incredible need for play, the same need for love and physical contact (including cuddly toys, one is ALWAYS in his bag with him to school - and when others have teased him, saying they are for babies, he has come home and told us and then said "but I don't care, I love my cuddly toys").
My heart aches because there is little I can do - I HAVE to hand him over to a system that I know cannot meet his needs - or those of many other children in the same situation as them - NOT because the teachers are not brilliant or understanding but because they are working in a system that gives them little flexibility to meet those needs. 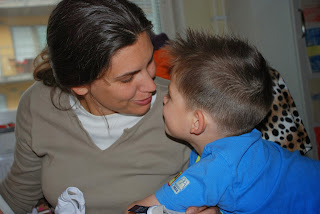 My heart aches because I have known this since he was two - but at his preschool they kept saying "nothing is wrong" - but seldom did I get positive news when I picked him up - I think I actually cried one day when a teacher said something positive about how his day went. In the end I insisted and took him to BUP - they could see there were issues and mentioned something about possible ADHD/Aspergers, but as it was just a preliminary  investigation they could not make a diagnosis - and because he was only 5-6 (he had his birthday as we did this first session at BUP) they felt it would be something that he would grow out of and that how lucky he was to have me and my husband as his parents.

He started school - I met the teachers before hand and talked with them about the importance of meeting Michael with a positive attitude as his behaviour was NOT something he had a great deal of control over and that it was NOT deliberate to disturb. Like all children he wants to be good.
The first year was brilliant - but of course this was entirely play-based as it is a preschool-class to help the class socialise and get accustomed to the school before starting first grade the year they turn seven. It was so amazing to see how my boy suddenly wanted to go to school after five years of hating preschool (the ulimate heartache was when another preschool parent came to me and informed me that their daughter had told them one of the preschool teachers hated my son - it was clear even to other children that my son was NOT getting the support he needed and was being seen in a negative frame of light - I think it is also why preschool-class was so positive because his new teachers were fabulous and were so VERY positive)

THEN he started first grade - and suddenly you had to sit still behind desks and learn by repeating and repeating which Michael thinks is pointless (I've already done that, why do I need to do it again?). Michael would not do homework - so we talked with his teacher and said that we would not force him to do his homework as this was making school even more negative. The teacher understood. And for the whole of first grade Michael resisted to learn to read and write - he wanted to play.
About half way though second grade he started to read and write - he is still reluctant about this - but he CAN. And he has started blogging - and today his blog went international thanks to Donna at Irresistable Ideas for Play Based Learning who featured his blog on their facebook page. Michael was so proud that in the end he wrote a post ALL BY HIMSELF - with no help or support from me in the writing part (except for the spelling afterwards). Usually he dictates and then reads it back to check that it is correct. The blog has been a great way to encourage him to read and write about HIS interests - he has been following the numbers of pageviews and we have be doing math about how many today - how many yesterday - how many more until... all very meaningful to him right now and therefore easy to do and not a CHORE!

All the time during first and second grade the teachers said he was doing fine - even though I kept asking, "do I need to contact BUP agai?". During his second grade his teacher went on maternity leave - he got a new teacher that could not cope with the class (there are several others in his class with school problems both diagnosed and undiagnosed) so they got a substitute teacher for a few months until there was a new class teacher in January. At the parent teacher talk in spring I again raised the question, do I need to contact BUP - and she said yes and was shocked that the previous teachers had NOT.

So my question is... are teachers afraid to say to parents that children could need extra support because they do not want to label children, are afraid of the parents reaction or because they are afraid that others think they are not capable of their job? Whatever the reason I should have trusted my own instincts - I should have contacted BUP much earlier - but I trusted the teachers - or at least I think I so desperately wanted it to be true that things were working fine for Michael in school. It hurts my heart to know that school (something that I loved as a child) is something so horribly wrong for him. It hurts when he comes home and says nobody likes him (even though I know that is not true, ut because something did not go his way at some point in the day and he does not have the social and emotional skills to be able to deal with that). It hurts when he says that he isn't any good at math - when I know he his - its just that math lessons are different than math. I know that Michael will do jsut fine in real life - he just has to survive school!

We try our best at home to support him and to make life positive - but this is FAR from easy. He does not like to have to do anything - so helping around the home is not a natural thing - and is something we do have to help him with to help us. Getting dressed in the morning is not always easy - so many times I have seen him standing playing at the window with his trousers half way up his legs.

He has a cozy corner in his bedroom - as I noticed that when he got really angry he went to hide there behind his chest of drawers - so we put cushions there and a stressballs etc - and when he gets REALLY angry (but I still need to get a point over) I sit on the floor in his room and wait. He will growl "what are you doing" and I will answer "waiting until you are ready for a cuddle" - and after a short while his need for cuddles becomes bigger than his need to be angry. We cuddle a while and then I ask "I can't help you if you don't explain, you need to tell me why" - this is usually answered "but its too tricky"
"so do the best you can and maybe I can help you find the words"
and then we can finally have a conversation where we can BOTH listen and understand each other's point of view - because often the problem is that he doesn't want to do something - I have no idea why and he will just shout... and he has no ability to listen and believes that we are not listening either.

But he gets better and better - and there are ups and downs. And there are days when everyone is against him and most days "Life is not fair" and "my sisters get this and get that"... and he needs to be reminded that they also do this and do that, which he does not...

Life is NEVER boring when he is around. He is CREATIVE. He is PLAY. He is LOVE. He is LAUGHTER.
He holds one of the keys to my heart - the same heart that aches often - and with a smile he can make it all feel good.

So, tomorrow starts a strange 10 days - and at the end of November we should be a little wiser.

I am sharing this because I regret not seeking help sooner - I am lucky because I work with children - and I have also spent a great deal of time learning more and more about special needs of all sorts to meet the needs of my son and the needs of the children I work with. It means that the children at my work have benefitted from my experience as a parent and my son has benefitted from my experience of my work. So I have known what strategies to put in place and have received a great deal of praise from BUP for my efforts over the years.

I encourage you to seek help if you feel your instincts are saying your child needs help - and for me help is learning and play and social strategies that allow the self esteem to feel strong and for each child to feel competent. And also to be able to learn the way they are supposed to learn and not the way the system says they have to (but maybe this is too much to hope for) 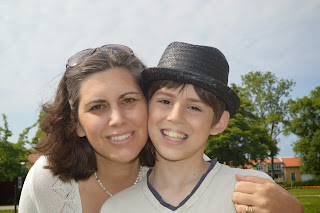 Email ThisBlogThis!Share to TwitterShare to FacebookShare to Pinterest
Labels: parenting