from magical forests to winter forests

In August we created Magic Forests - a collaborative artwork where the children continued on a different forest part each time...
They were created in four sessions...
part one
part two
part three
part four

As we have returned to the fairy project at a different time of the year and a whole new season the children felt the forests were just too summery - so we added snow. In keeping with how the magic forests were created tissue paper was used again, and also in keeping with that all the artworks belonged to all of us everything was arranged to create movment so that there would be no obvious place for each child to work.

On one table was a basket of roughly ripped white tissue paper - the children were shown how they could glue it flat or roll it into balls and glue it on as techniques that could be used. The children would walk to the far side of another table to use the glue - using only three glue sticks between the six children (many are still at home with chicken pox) the children needed to negotiate and take turns. There were two blue and one red glue stick and for some children using the red glue stick was totally worth the wait!
The children then took their gluey tissue paper round the table to place somewhere on the magic forests. Then the whole process was repeated again and again and again until we had created snowy forests!

Some children tended to glue on a particular forest part each time while others really did put paper on every single one. Some were careful to put paper all over the forest while others tended to make piles - the snow getting deeper and deeper in just one spot. I noticed that it was the youngest ones that did this, so I am a little curious as to whether this is a personal preference or a kind of developmental stage - as I remember how some of the four year olds were doing this at the start of this year (and have noticed this with other children over the years but mostly with the younger children - especially when they paint on the exact same spot until the paper wears through).

When all the paper was used up we left them to dry as we headed out hoping for snow - but it looks like we will have to wait until next week! 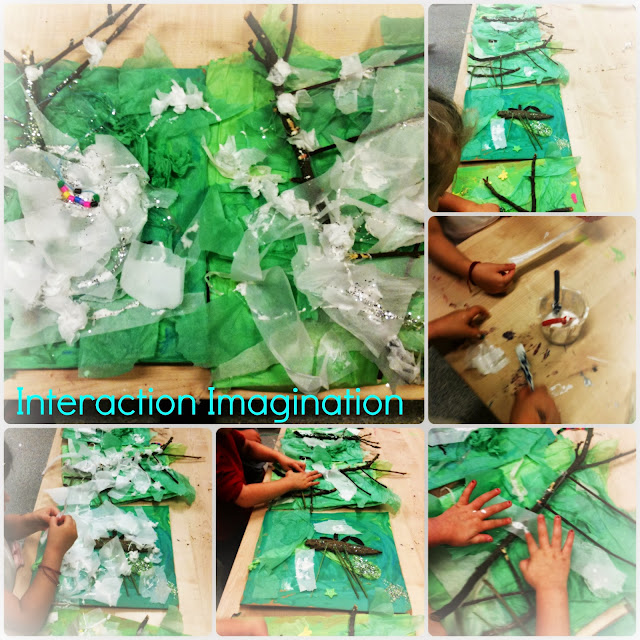