Today my energy levels have been ignited for three reasons. 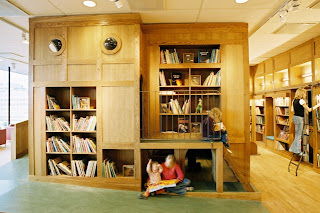 1. My visit to the Room for Children at the Culture House in central Stockholm allowed me to witness that form of play that I have been blogging about of late. Room for Children (Rum för Barn) is a great library created for children up to the age of 12 - with small nooks and crannies to explore, books, pictures, games and puzzles as well as an art studio with various activities available.  In the photo above you can see behind the reading children that their is a space to play UNDER the book shelf. In there eight year old Michael started to play with others that he had never met before - an 11 year old boy, two 5 year old girls, a five year old boy and a three year old girl. They devised a game, in an area devoid of adults, it was a kind of cushion fight that the two oldest boys had adapted to meet the needs of the youngest children.
At first I wanted to interfere - cushion "fight"? In a library?
But it was quiet and they were playing harmoniously and together.
It worked for about 20 minutes until the five year olds got so excited they started screaming with joy - so my position of being able to watch without being noticed by them was abandoned and I mentioned that screaming was not such a good idea in a library... they changed tactics. (The younger boy and girl left to go home. ) The 11 year old, my Michael and the two five year old girls moved up to the upper level where you see the two portholes. The two boys (my eight year old Michael was taller than the 11 year old - but Michael is VERY tall for his age) dominated the upper area, and again I chose not to interfere, but to listen. The girls were like shadows, listening to the boys who were making jokes, poking gentle fun at the girls, who giggled and responded in a way that showed me they liked the attention (as I could see the girls better than the boys), but it was mostly the boys who were interacting and the girls observing. When the father of one of the girls came by to ask if she wanted to read with him she said a very clear "No, I am playing". Which I thought was interesting. She didn't look like she was playing - she was standing there watching the big boys banter about all sorts of silly things - but she knew that she was PLAYING.

2. The second great part of today was for my girls, who will be 12 in ten days. The librarian there told them that there was a special library for 10-13 year olds two floors down in the building (its a HUGE building). I was not sure where it was, but saw that the girls felt confident to find it themselves, and so I trusted them. Off they went. The below picture shows you the fabulous library, with filmmaking facilities, a kitchen, theatre area for acting out plays, and the chance to borrow i-pads and computers - all for free, just a library card is needed - OH YEAH - and no adults allowed in (just those who work there). TenThirteen is going to be a well frequented place for my daughters - they have already planned to go there to meet a new friend they met there today. 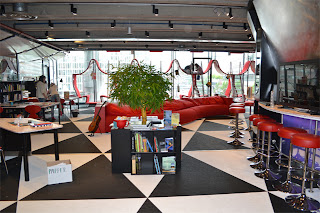 3.  And my last energy boost has been a phone call this evening. I am going to be part of a group of people working voluntarily for Barnverket (Childrens Works) where my role will be to take a look at the preschool curriculum here in Sweden to see if it meets children's needs according to the criteria of Barnverket. My role is a small part in a big oversight of school and preschool documents.  Its going to be very interesting - and I want to be quite hard and critical of the curriculum - to find its strengths and weaknesses. I am very excited about this.
The phone call meant I got to speak with Monica Wester for the first time. Monica is passionate about the working environment from the children's point of view and that the WHOLE child is considered and not just a focus on the academics (the physical and the spirit). She has her own website where she links up information relevant to preschool and schools - I balans MW (In Balance MW) and is constant contact with the media to ensure that these questions about children's rights to be seen as a whole and not just a vessel to be filled with knowledge remains on everyones lips.