My musings over do children play enough outside of school/preschool has been read far and wide, so I thought I would briefly follow it up.

I am by no means alone in my concern for genuine play becoming extinct, a mutated form of play is replacing it, and just because we are calling it play does not mean that we are offering our children the same freedom to take risks, make mistakes and to learn.

I am always grateful for comments, and my last post produced some thought-provoking ones. This is why I have found some link to others who have written about real play,  neighboourhood play and outdoor play.

Last night I talked about play with my father-in-law and we shared the same experience - that playing as a child was not confined to children of the same age or same sex - it really was the whole neighbourhood with a mix of ages and sex. This means that the when we were younger we could look up and admire the talents and imagination of the older children, and as we became the older children we learned how to be responsible and take care and include EVERYONE. We naturally learned social skills. Its also meant that we were not doing "girl" thing or "boy" things we were doing "child" things together - sharing our experiences, our fun - we were equals at play taking turns to lead the play as all our ideas met and became the greatest game on the planet... (and yes I remember times when I felt left out and not listened to, or that others ganged up with their words against me - but I learnt how to deal with this, others learnt how to stick up for me, as I learned to stick up for my friends in need...)

I am up for outdoor play - its important I have written about it before (outdoor play and sleep) but I also want to raise a voice for real indoor play too. My son has just invented a new game - right now in front of me with wooden blocks and lego figures - it resembles Angry Birds a little. He is now instructing my husband how this game is to be played - he has to make sure his rules are consequent...

As a child I had a great deal of freedom indoors too, where every week the neighbourhood spent an evening at one of our homes (during the dark winter months) - lots of hiding games, blind mans buff, designing and making clothes for our dolls, building lego, playing board games, drawing and writing our own magazines/comics and of course producing puppet show after puppet show which our parents watched (making our own puppets out of rolled up newspaper sticks and cut out figures, making up our own stories, making the tickets, arranging the stage and the seating arrangement). I LOVED being a child - sometimes I think my inner child has never left me. My greatest compliment has been "Suzanne, who is sometimes and adult, sometimes a child..."

Now for the links, and a excerpt from each one...


The Guardian, October 2012
The Play England director, Cath Prisk, says: "There is a staggering amount of evidence that outdoor play is an essential part of children's health and happiness, yet children face more barriers to playing outside than ever before. Crucially, having children playing outside, and actively involving adults in providing great play opportunities for them, make our communities better places to live."

Well Child Chats, January 2012
Play comes naturally to children, but we as adults need to learn to foster it because there has never been more distractions and interruptions to unhindered play.

Parent Dish, September 2008
Unstructured play gives children the opportunity to be problem solvers and active thinkers. And I can tell right away which kids spend time playing regularly. I know which ones have lingered over mud pies in their back yards or built Lego castles and monsters without reading directions first. They are always the ones who write the best stories; who can solve problems independently; who initiate and innovate and create.

Human Kinetics, 2010
A good skill repertoire does not, however, appear automatically: The more free-play time available to children, the greater the chance that their repertoire will expand. It takes practice and opportunity; for some children, it also takes instruction and coaching.

The Independant, August 2012
Chris Gittins, from Streets Alive, points the finger at "stranger danger". He says: "The number of children killed by a stranger is tiny, but we obsess about it when you're actually more likely to win the lottery. It's hard to maintain context, but this is why parents are reluctant to let their children outdoors any more. Fear." He believes that effectively removing children from public space is detrimental to both their development and society's. He says: "It creates mistrust. If the only children you hear about are the ones in the newspapers that are misbehaving, you think all young people are like that. Then there is fear and alienation between generations."


Of course, going the route of relying on daycare centers or schools to take the reigns is not without its challenges: a 2008 study found that some teachers make the entire class stay inside if one child has forgotten a coat or shows up in flip-flops. Even more surprising was that some parents were purposely keeping their child's coat so that he or she couldn't play outside.
The Dimensions Foundation, 2009
Prologue
Once upon a time, in the not so distant past, many children left the adult world on a daily basis and entered an outdoor world filled with fantasy and improvisation. They played alone, in pairs, or in groups. Using sticks, branches, logs, sand, dirt, water and other natural materials they built forts, castles, houses, ships, rockets – some were large scale models while others were miniatures. As they ran, jumped, dug, climbed, threw, slid, twirled and whirled, their imaginations took them across the prairie in covered wagons, up the tallest mountains, into outer space and on high sea adventures. They assumed the roles of family members, animals, performers, and the occupations of those in their communities. They fought fires, bad guys, monsters, and aliens. They used few props, and the props they used were products of their own resourcefulness. They organized their own sports games, where they were the players, coaches, and referees. They used negotiation and problem-solving skills to create and adapt the rules. At the end of the day, they returned indoors dirty and tired but feeling happy, confident, competent and full of stories. These children were immersed in authentic play, play that engaged them mentally, physically, socially, and emotionally.


My own children have started with experience presents instead of toys and "things". This year my 8 year old and one of my soon to be 12 year old twins (Michael and Sophia) have received the gift of a weekend experience at one of Sweden's zoos, Isabelle wants a weekend at the Bookfair in Gothenburg - and what parent would want to say no to THAT? Having experiences for presents started two years ago - when the children received an "Owl Experience" for their birthdays - we had an amazing morning with an owl handler, meeting, handling, feeding, learning about and even getting to help train a baby owl - it was AMAZING. What these experiences do is free the children from a collection of unnecessary toys/things that have the potential to restrict their imagination. They have everything they need - anything that comes now is surplus. I am not saying that I will never buy my children anymore toys but I am certainly going to enjoy spending TIME doing something special with my children 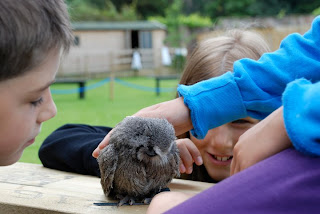 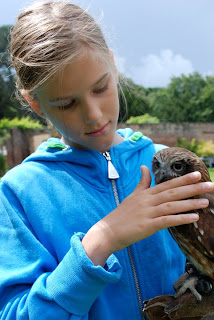 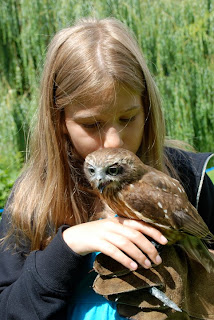 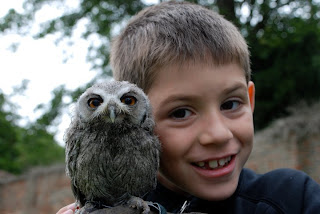