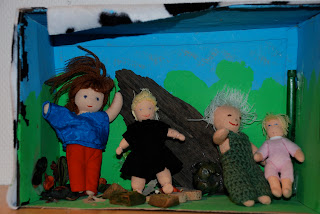 A parent active schooling in seems to be the most widely used method of schooling-in these days in Sweden  where parents spend the first three or four days at the preschool together with their children as opposed to the three week schooling in where the child is at the preschool with parents the first day or two for an hour and then without parents where the days get slowly longer and longer until they are there for a day. Both systems left room to meet the individual needs for the children.

I do think that 4 days is too short for schooling in young children - and really the parents should be informed that the process takes 3 weeks as it did before BUT that the first days are parent active - sometimes parents expect to go to work after 3-4 days not realising that is can take longer and can therefore feel frustrated when it takes longer (even though they understand that is was beneficial later).

I have been a part of schooling in that has been 3 weeks (my own children were schooled in this way too) as well as the 3 day and 4 day parent active system. I think the shorter parent active works great as long as the parents understand that it is a part of a 3 week schooling in and that the first three weeeks the days are short and NOT full time - and also there is the chance during this time that MORE days are parent active to support the child in the process of starting preschool (and parent active can involve either the parents are with us for more days OR that the child has half days for a while and slowly increases the length of their stay).

How the 3-4 days are situated is also interesting - some preschools have a Monday- Thursday system - although I prefer the Wednesday to Monday system so that after the weekend the child has one more day with parent support before being left for the first time - it also means that the first week is not so long (in case the child does not take naps like they usually do - and also for the sake of the children who, already attend the preschool and have to deal with the added stress of not only new children but a whole bunch of strange adults invading their space).

The most important part is observing the child. What does the child need? How is the transition made a smooth as possible? AND to always respect the fact that with the youngest of the children - they have not chosen this - it is the parents that have chosen for them to attend the preschool - at that it is OK for children to be sad - they need to mourn the loss of their life as they once knew it with their parent at home - and adapt and learn to appreciate life at preschool.

But that was my first reflection on schooling in ... no doubt during 2013 more reflections will pop up...
Posted by Suzanne Axelsson - Interaction Imagination at 21:48

Email ThisBlogThis!Share to TwitterShare to FacebookShare to Pinterest
Labels: schooling-in