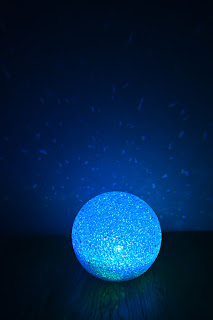 Now this was fun - and even though the group is still forming and getting to know each other it was wonderful to see how they could "experiment" with the light - there was a LOT of running and jumping around with the torches but also testing out how to change the colour of the light coming from the torches. The mood ball was great - it was a cheap ball of battery powered colour-changing light - which we could spin when we sat in a circle when we first started, using mirrors to full effect. Of course sitting and taking turns is not every two and three year old's cup of tea - so after a while the torches came out and it was like opening a bottle of energy - whoosh! the children were all over the room exploring, running, jumping, using the colour paddles and chiffon scarves. Having a long exposure on the camera and the movement of the torches made some really exciting photographs - but as those show faces I won't put them on my blog... check out my photo experiments of the Christmas tree to get the idea...

I was told - "That was really fun" as one of the children returned their torch at the end of the session.


Filming was a great way to really capture the contrasts between the light and dark - and I am looking forward to seeing how the children react to how they experimented with the light. Tomorrow we are going to sensacional at Dansens Hus (House of Dance) and there will be more light to experience - so it will be interesting to see how the children will compare the experiences. AND then to revisit today's experience - maybe an art session on the lightbox and further light experiments...? We will just have to see how much interest the children have in this mini light project.