A part of society

Filosofiska in Dalen does not have it's own yard - instead we go out to parks and the forest. Yes I miss having a yard to develop outside play in a similar way as to what we would indoors - but NOT having a yard means that we ARE a part of society and not fenced off as a separate entity of early childhood.

In the last two weeks the children in Vinden have been interested in selling things - to people passing by - and it has been interesting to watch - not just the children and their interactions and the learning potential but also to observe how SOCIETY reacts to this small group of 2-4 year olds.

Yesterday there was a series of different play in The Snail Park (a small public garden area between the preschool and the station - that the children have called The Snail Park due to all the snails we have found there) - we started off with sliding on the ice, that went off to playing jokes with each other with a fake poop one of the children had with them, to trying to sell the fake poop to passer's by.

There seemed to be three kinds of passers by...

The majority avoided eye-contact with the children and just walked past them as if they did not exist (in much them same way described in our teacher philosophy session about empathy where we talked about giving beggars eye-contact even if you are not going to give them money or food -acknowledgement of existence is important.)

A smaller number of people walked by but smiled at the children and continued to smile as they walked on.

And an even smaller number of people stopped to talk with the children - we noticed that these tended to be parents (with their child/ren) or older people. On two occasions the children were given money - 1 krona (one one of those two children received coins) - so we returned to preschool three kronor richer.

Tomorrow I will go more into those coins - as we have a whole load of thoughts about them - and have already started the process with the children... but this post is about my observations about how others reacted to the children. 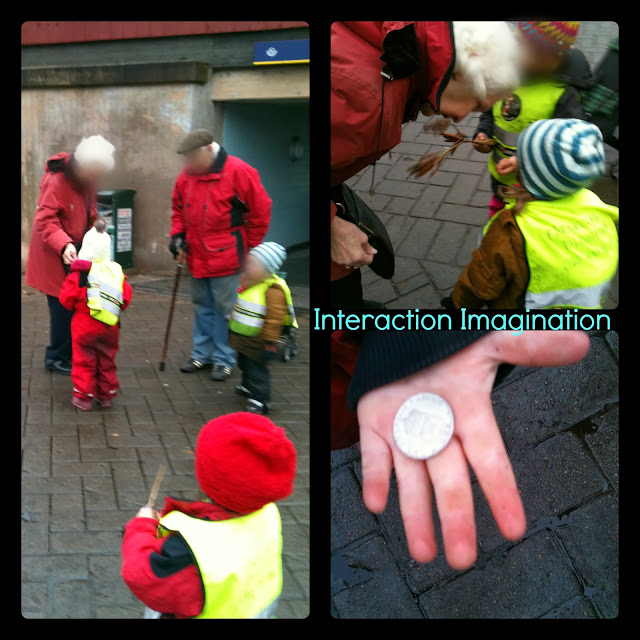 I did not have a great deal of expectation that people would stop and really buy, or pretend to buy - but I have to admit that I had expected more people to SEE the children. It shocked me at just how many people treated the children as invisible. And what am I to do with these observations?

So what does this tell us about the soul of this part of Stockholm - that so many treat the children as invisible? And what can we do to make the children more visible?

Well Ellen and I have thought about making a cardboard box kiosk/stall for the children to start selling things - maybe time to start making art, collecting stones... but no doubt we will make our minds up together WITH the children - afterall we are hoping to improve THEIR visibility in society not make ourown adult selves more visible through them...

Yesterday they were selling fake poop and stones they found in the park... The poop was fun, but as it belonged to a child it did make it more complicated (and it was given back to her, and she got to keep the coin too - so it kind of lost part of the pedagogical value) - so I would much rather that it was something that was found/created for the purpose of the kiosk/stall and the children could learn about how selling and buying works.

Maybe the rails up the sides of the paths could be utilized as part of a winter art exhibition? Displaying the children's art for a week? AND if the children are there - then they could talk about their art and how they made it...? Again we have to see what kind of interest there is - AND of course I have images and things of their art which we could use as part of that exhibition.

I have also been wanting to make some ice-art to hang in the trees in that garden - so now that the temperatures have dropped below freezing - this could be the time to start experimenting with ice and art...

Of course there are far too many ideas for right now - this will have to be projects that we can do when the time is right and meaningful - but as we will be baking pepparkakor next week as part of our sensory approach to Christmas - there is the possibility of selling some of those? AND I would be interested to see if the children come up with giving the beggar who usually sits in the tunnel of the station a pepparkaka for free...

If we are going to try and make the children visible to society we also need to help make others visible to the children too.
Posted by Suzanne Axelsson - Interaction Imagination at 22:09

Email ThisBlogThis!Share to TwitterShare to FacebookShare to Pinterest
Labels: Empathy, inclusive, reflections on my work, the competent child