What with the Winter Olympics coming soon I am starting to look for activities for a week long Olympics and Russia exploration - with most of the focus, for us, being on Russia as we have a child and her family that come from there, so it would be a wonderful and natural way to introduce her culture to the rest of the group...

This is a post full of links... here I am gathering ideas - as yet I don't know  how or IF these ideas are going to be used - but I gather lots of ideas and then see where the children are in their interests and then introduce the activities I think will meet the children's needs and interests... 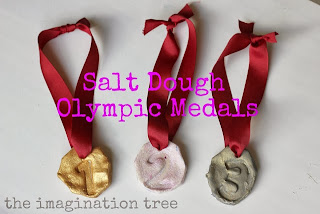 Making flags - not just a great excuse to share the Russian flag, but other flags too - hopefully a whole string of flags from all the coutries represented at the preschool...

Put some music on and pretend to skate - either speed skating in sock feet indoors, or figure skating - we might need some squares of carpet to make it more slippery and fun. It would be great to choose Russian music - not just folk music but all forms of their music - maybe check out the Russian entries of Eurovision song contest over the years!!

The official Winter Olympics mascots - here you can see the mascots - there are also short films in Russian with English subtitles featuring the mascots.

Snowball activities - who can throw it the furthest, throwing them into buckets - if you don't have snow why not use white beanbags or rolled up white socks.

During the 2010 winter Olympics instead of curling I made up a game where the children wafted newspapers to make round pieces of paper move across the room and try to land in the circles taped onto the floor at the opposite side... this game proved to be VERY popular.

Using ice-cubes to build with. AND other various forms of ice sculptures

Use toilet rolls dipped in the olympic colours to create the Olympic flag - and Olympic inspired art - let the child go wild with those circles - I usually try to do two paintings - one where the child tries to copy the olympic flag - for the mathematic value of it - and then to do a separate piece of circle artwork.

Sledging - use a piece of cardboard on sand or grass - or slide down wet plastic if you are somewhere hot! One year I built a snow obstacle course for sledges - that I ended up mostly pulling the children over as fast as I could so that they would fly over the jumps... 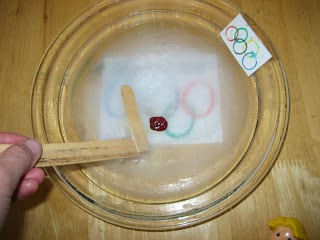 Toddler Approved - hands free pingpong (with links to some other Olympic ideas - but they are of a summer feel rather than winter feel). The great thing about this indoor sport is that it really does train up the mouth muscles which is wonderful for language development and pronunciation. 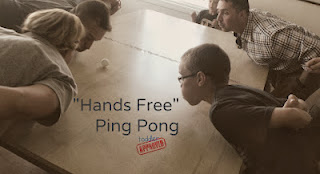 Meet Kandinsky - born in Moscow Russia - Art and Design Technology for Kids - why not look at Russian artists - and of course the circles lend themselves so well to the Olympics!! 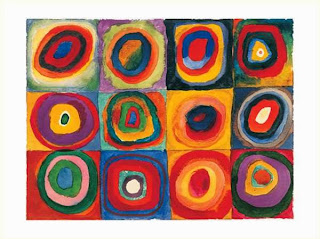 Russian Folk Music on Youtube - lots and lots of Russian folk songs - do take the time to browse through the various clips of music and dance... some are really old, some are new, some are cartoons for children - there is a real mix here.

is this dancing or gliding? Another youtube clip -  can you glide like this dance? Would be fun to see if we could all do this as part of a music and dance session Russian style! 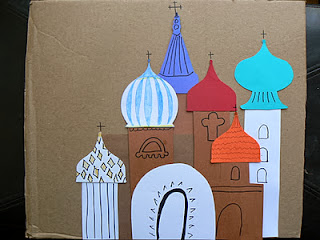 The Educators Spin On It - Seven ways to use Russian Dolls 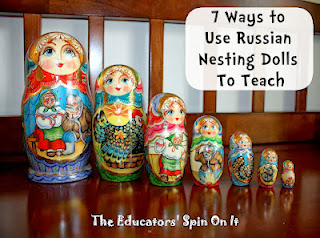 Russian For Free learn Russian for free... some odd sentences to learn - just pick out the positive ones!!

Russian for Everyone the Russian alphabet - with the facility to listen to the sound of the letters... looks very appealing too!

Of course this is just a start... there ARE lots of things out there with worksheets and colour in pages... but that is not the sort of thing you will find on my blog or page (there are plenty of other sources for you if that is your sort of thing though...)... so for now that is what I have found so far this evening that seems like it can be of inspiration... if you come across any other Russia or Winter Olympic inspiration please drop by my facebook page and link them... many thanks

Email ThisBlogThis!Share to TwitterShare to FacebookShare to Pinterest
Labels: Olympics