My inner child can come out at any time - this might not mean that I participate (mostly because the children don't give me a chance!!!) - it just recognises a need in the children because I remember what it was like to be a child and what was fun and exciting... and then the adult in me can see the learning value!

During afternoon snack we were talking about fairies, flight and jumping - amongst other things and one of the children mentioned something about fly-jumping and how much fun it is...

So I got up and went to get something with a twinkle in my eye - and returned with the step ladder that we had used in the height-painting...

I put it up on the mat and offered it to the children to jump from.

As soon as snack time was over the children hurried to test out the fly-jumper!

Some giggled hysterically at the fact they had just been so brave to fly-jump from the top! Those waiting to jump could hardly keep still with excitement.

Here the children got to test their own limits, they got to solve the problem of making the landing area appropriate for their needs, they showed great social skills of taking turns even when it was VERY exciting, and social skills of supporting each other. 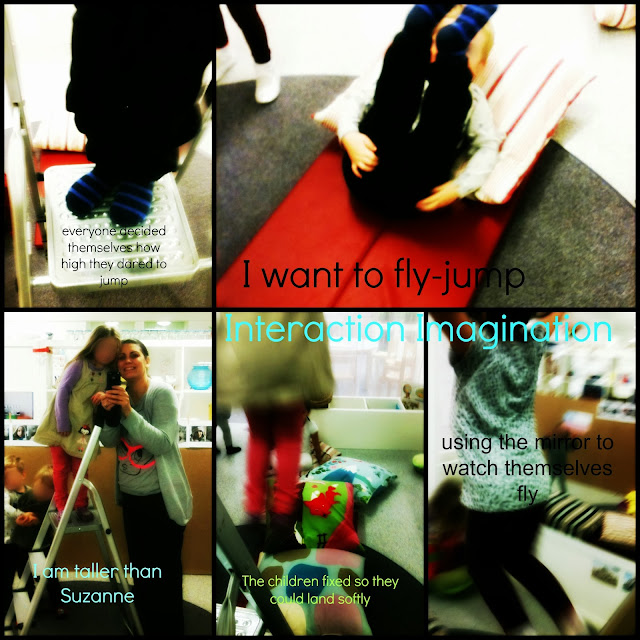 and getting to be taller than me - was real fun!
The mirror was a HUGE hit - they watched themselves fly again and again.
Their landing became more and more daring too - as they arranged the pillows in different ways.
Posted by Suzanne Axelsson - Interaction Imagination at 22:39