Inspired by Tom's BIG BOX sensory and hands on learning experience (check out that post on his blog  Sand and Water Tables) I wanted to have a go at doing something similar but with a Christmas twist. I also knew I was not going to get my hands on a box of the same dimensions as Tom has for the children you see on his post - so I went for a different angle - not the hanging in with half the body sort of experience - but more of a peeping in and feeling with hands - to waken different senses and a different awareness. 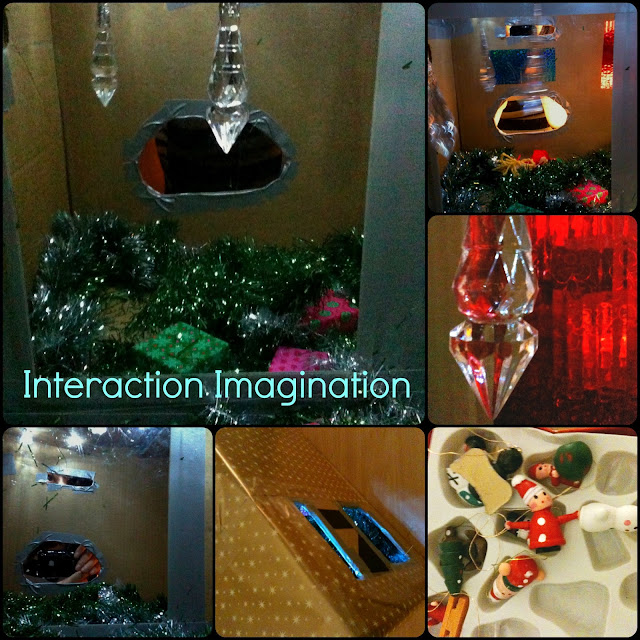 As Tom does, I reinforced the holes I made with silver tape so that they would be more durable - and I wrapped MOST of the outside in wrapping to make it look like a present. On the walls inside the box I taped an acrylic mirror and some holographic reflective paper. In the roof of the box I made a series of holes and popped a batterie driven set of fairy light through to twinkle and light up the inside of the box.
Each long side of the box had two holes, a lower larger hole for hands and a upper smaller hole for eyes.
Inside the box I cut up bits of old tinsel and also placed mini boxes in three different sizes which I filled with small Christmassy figures and mini jingle bells. A small fairy ragdoll also was put in (to connect the box with our philosophy discussions and out project at the moment - weaving Christmas into our project rather than breaking off our project to "do" Christmas).
The box has been taped onto a small table to keep is steady and at a good working height for the children.

I put the box together yesterday evening after all the children had gone home (which was just as well as the scissors and silver tape were not always getting on - rather happy I have just ordered some new scissors - grrr). Today the children go to see and experience it. They were quite excited about it and liked shaking and discovering what was inside the boxes - and also discovering that you could see a friend across the box. The holes were big enough for three children to be there at the same time - but I am not so sure that this would be optimal in the long run.


Today was one of those days where it was hard to let my inner-child free - today was a day that I needed to be a grown-up for the sake of the group - so today was not a great day to introduce the sensory box as social skills were not my little group's strong point today. So I am hoping that tomorrrow all will have slept well and are ready to experience the day...

The first stage of using/playing with the Christmas sensory box I am keeping quite a strict rule that they must play INSIDE the box. The idea is to challenge their senses and their approach to play - and also to encourage not to hoard things they like and carry them all over the preschool not sharing them with others - and also leaving them here there and everywhere. As this sensory box contains small parts there NEEDS to be well defined rules so that these small parts to not present themselves as a choking hazard elsewhere in the preschool. The box is located in a room designed for the older children with access to small parts.

I am interested in adding scents to the box to stimulate more senses - but I wanted to start off fairly basic and add to it over the coming weeks in the lead up to Christmas. Tomorrow we will be talking about "What is Christmas" during our philosophy session (if we manage - this morning we broke it off as we could see the children could not focus - and our plans to measure and use math to design fairy doors went right out of the window as we saw the children had a greater need to play outside, freely and without the need to focus intently on fairydoor maths - sometimes its just the way it goes...) - anyway the Christmas philosophising might bring to our attention new things we need to add to the sensory box to make it relevant to the children - and also to ensure that all our Christmas cultures are represented - as a Swedish Christmas is different from a British Christmas which is different from a... and then not all our families celebrate Christmas - so I am hoping that this talk will allow us to bring other elements into the sensory box. I have not named the box - it is just there - so as yet it is not connected JUST to Christmas.

So despite being a little dissappointed that the box has not really got off to the start I hoped - I am still quite excited about how this will develop.
Posted by Suzanne Axelsson - Interaction Imagination at 21:54