On Friday we celebrated Lucia here in Sweden.

At Filosofiska we celebrated our way - creating our own traditions. We had made pepparkakor (check out the recipe and a little know-how at Anne's Food blog) during the week. If you have read my post "Children and Empathy" you wil already know that I have been trying to incorporate the children's interest in selling things to passers by with developing their sense of empathic awareness and ability to respond to this awareness.

We decided that we would hand out the pepparkakor for free so that the children could see for themselves the effect of their kindness - serving as a sort of empathy seed to grow and bloom.
I noticed that in the comments that the suggestion of a collection jar for those passers-by who were interested in donating. I think this is a great idea, and had thought about it a lot a great deal too, but felt that in this first attempt with sharing with our comunity - of making the children visible - that the donations might have been tricky for this group of young children to understand that they were NOT selling the pepparkakor. THIS time I felt it was necessary for everything to be clear so that the children could see how the effects of their own actions had on the people around them... 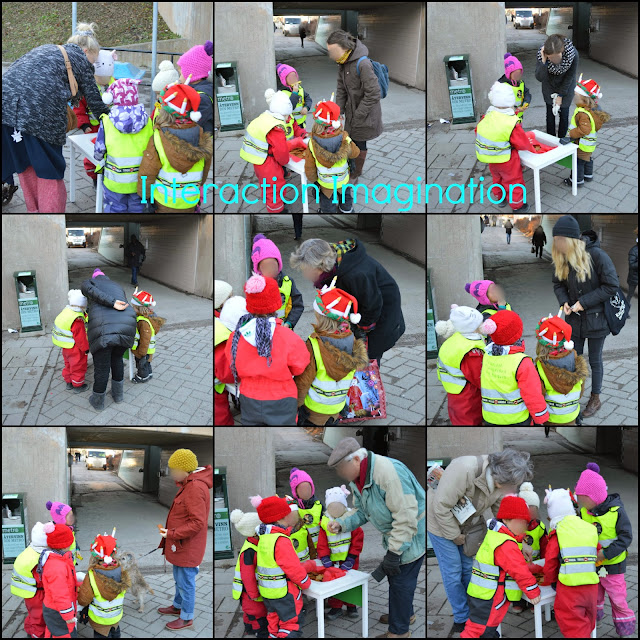 Here are just some of the people that stopped and took their timeto interact with the children and take a pepparkaka. The great part of taking a small table out was that it really did encourage the adults to come down to the children's level... I hadn't thought of that before. I wonder how it would have been if it was a usual adult sized table... would the adults have all come down so low and communicated with the children whilst down there.

Those who took pepparkakor all talked with the children, asking them if they had bked them themselves and congratulating them on a job well done. The children were bouncing up with joy as they could see how much others were smiling.

The children found it tricky at first not to say "come and buy" and needed some help to remember that they were in fact offering the cookies for free.

This was something they pointed out to everyone... "they are free" "they cost free", "you don't need money, they cost nothing".

Some children were much more active than others to approach people and ask if they would like a pepparkaka. In the beginning the children only asked women - I asked why they had not yet asked any men. "Because they are a little scary" came the answer - but as they went on they got braver (plus a another child who came late arrived and was not the least shy of the men, gave courage to all the children)

BUT not EVERYONE stopped to share... not EVERYONE even gave eye contact. Some did not want a cookie or could not eat them due to allergies (next time we have to make some without flour said one of the children) and some were in an obvious hurry to catch the train and could not stop. (there were not so many trains that day, as there had been a fire at a station a few stops away which meant our steady supply of passers-by was not quite as steady as we would have hoped)

The children came to the conclusion (when we talked about it later indoors in the warmth of the preschool) that maybe they did not stop or look at us because they were shy and scared of us or that  they were in a hurry and didn't have time. They did also admit that it was not a good feeling to be ignored like that (that they just walked by without looking or saying anything, or even a smile) - but there was a humbling understanding that they must have had a good reason to behave in that way.

Of all the people that stopped and interacted with the children three of them also came and talked with us - 2 men and one woman. The woman wanted to share her joy at what the children were doing - and learn more about why we were doing this (she turned out to be a retired teacher) the two men came and shared their own Christmas and pepparkakor experiences from their childhood.


We are at the beginning of a project and the end of the a project... I see the fairies will still have their hold over the children, but not in the same way as the children's comunication with the people around them.

So in the new year we will started "TILLSAMMANS  PÅ TORGET" (Together on the Square) a project about meeting various needs and wishes on the square outside the preschool. A project that will encompass the whole of the preschool curriculum, all of Filosofiska's VISION  and will also allow us to deepen out own understanding of empathy together with the children....

I am so looking forward to getting started... well we have already sort of started...

a post about our Lucia celebration will come shortly...