We have a light rope that has been wrapped around a pillar since before I started at this preschool - at the moment this rope-light is starting to fall down - and today most of it was coiled around the floor.

As I returned to the children after my reflection time (busy writing up all the learning that has been occurring in our fairy project - and printing out a whole load of documentation for the board) I discovered the children were in the dark dancing - "disco time"...

Having wanted to place the rope-light on the floor for quite some time I took advantage of its coils and put it across the floor. The children jumped and hopped over it in a variety of ways.

After a while one of the children picked up the other end and started swishing it around - it made the most amazing effects - and the inner child in me kept quiet so that I could watch, mesmerised, clicking on the camera on my phone hoping that it would capture the effect - and it did a little - but nothing like it looked in real time. Until the rope started swinging wilder and wilder and there was risk for both damage and injury and the experiment had to be stopped.

The children could see the effect on the rope - some of the lights went out for a while - so it was very understandable for them to see that swishing it around was no good... BUT the need to swish was too strong - it could no longer remain on the ground anymore - and it returned to being coiled around the pillar once again. 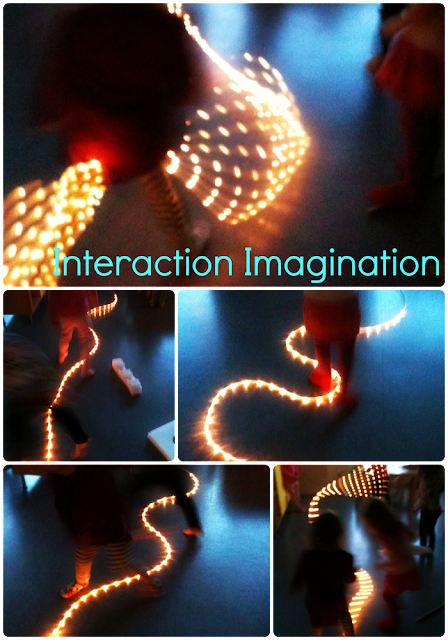