The park we went to today had a big puddle that had frozen over and was now melting - creating a big wet slippery surface. I just KNEW it was going to be a child magnet - at the same time I knew that the children would feel cold if they got wet - and there was not going to be much of an IF if they played on that surface...

So instead of telling them no - I said that they could - BUT that they must be prepared to get wet and they must be prepared to feel cold, as getting wet in temperatures just above freezing means that you will feel cold quickly. I also knew we were not far from the preschool so that if they did get cold it would not take us long to get back to the delicious warmth, and be able to put their clothes in the drying cupboards.

At first all the children went to the other end of the play space, but about 15 minutes later a child ventured over and was soaking within 5 seconds as she slipped over laughing. She was joined by three other children who had a wail of a time, smashing ice, running, sliding and throwing themselves down to glide across the puddle. The water was literally dripping off them! 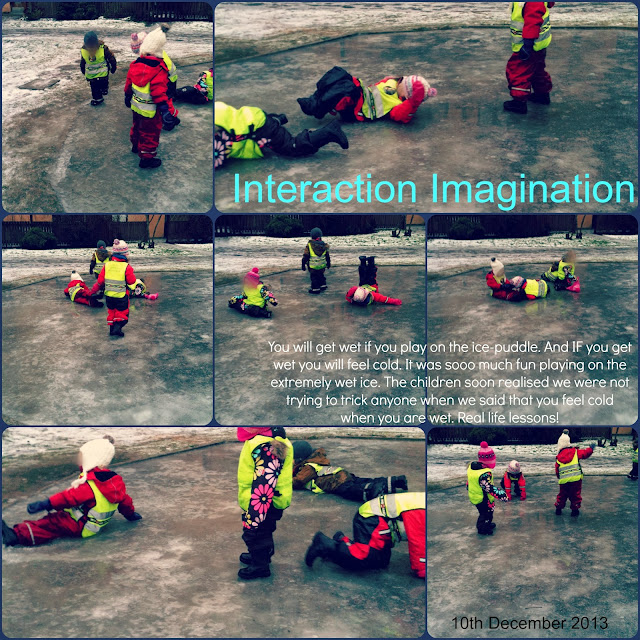 This time last year I could hardly walk due to tearing ligaments in my ankle (the second year running - so this year I am really cautious) - so I stood at the edge watching and laughing - but even so - those bubbles under the surface of the ice were just SOOO enticing that I just HAD to put my foot on the ice and make them move - and make a few holes by smashing my heel down. I LOVED doing this as a child. My sister and I used to spray the back yard with water so that we could create a "skiddy patch" that we would launch ourselves at full speed!

My most mitten resistent child actually stopped sliding and went to get her mittens! And as we were about to leave the first tears came - as a hat fell off in the deepest part of the puddle and got soaking wet... the fact that the rest of her was totally dripping had not bothered her until then. The children that had played in the water did mention that they were cold on the way back - one even said to me "Next time I don't want to get so wet" - I answered - "well it's much better that you have learned this yourself, now you really know"