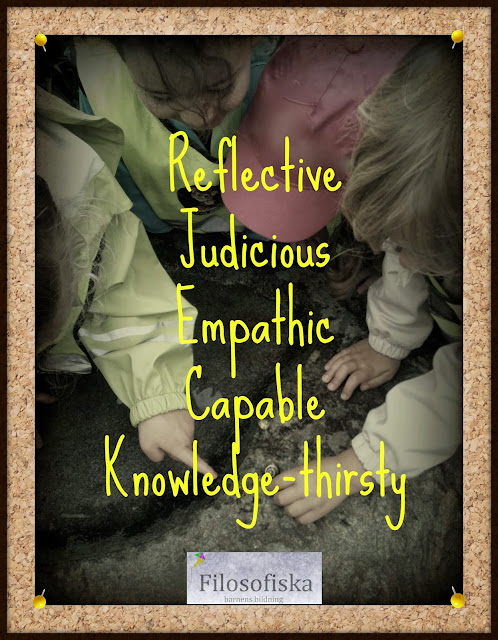 Empathy is one of Filosofiskas foundation stones that we build the preschool upon - we have discussed together what all these words mean and how we can apply this to the setting - we have also been exploring empathy on a deeper level with the idea that the two preschool settings in Stockholm and the school in Nepal can work together, in our own ways, to highlight empathy - for ourselves, for the children and for the outside world. (In our own ways - so that it is meaningful for the children at each location).

Last week I mentioned about the children selling things to passers-by and how they made 3 kronor - although in that post the focus was on the children's visibility in society.

When we came back into the preschool with those precious coins we started to discuss what we could do with the money. The three children that had the coins in their hands of course wanted to keep them - they were theirs... BUT when we talked about it they soon realised that the whole group had in fact, together, worked for those coins, and so the coins did not belong to them but to the group - but that they were the ones that received the coins.

The idea of parting with the coins by giving them to charity was not at all appealing to the children. Of course... the children have no REAL understanding that others may not fair as well as themselves.
So we showed the children some images of children's bedrooms from around the world - showing three bedrooms that were obviously not as well off as themselves with their beds and toys. To see all the bedrooms take the time to go to James Mollison, "Where Children Sleep" - the photos below are taken from there 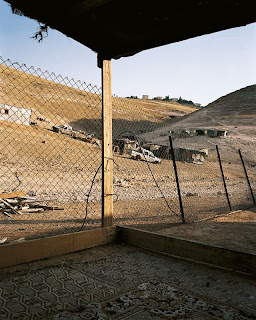 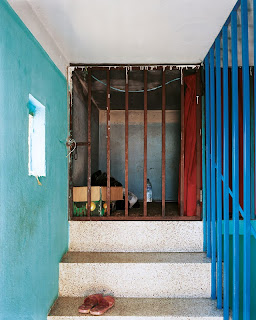 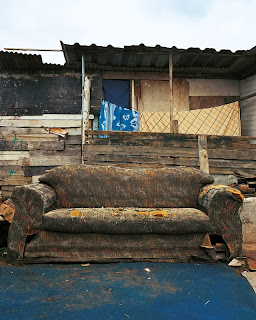 What was suprising was the children's lack of comprehension that these images reflect poverty - one child showed visible shock at the image of sleeping on the floor - while another child thought that the sofa looked beautiful and would like to sleep there ...

The images they saw were small, (on a phone)  so maybe this was not allowing the children to see the details and allow them to see the differences - so we have plans to show the images in a larger format.

I also think that children DO think about beauty in a very different way from ourselves too - I personally have difficulty in seeing the beauty in these images because I have an understanding of the poverty and the misery that often comes hand in hand with this poverty - but if you come with a child's eyes then there are new possibilities of viewing something - seeing it AS IT IS - and not with all the understanding clouding our view... of course the understanding is VITAL for us to make wise decisions...

See my post on BEAUTY if you are interested in reading about my musings about children and beauty and what beauty is anyway...

So on Friday we are going to sell pepparkakor  (that we have being baking) in The Snail Park with the idea that the money goes to the school in Nepal - as we not only support the school there with educational inspiration, using philosophy and our vision of reflective, judicious, empathic, capable and knowledge-thirsty children/people but also financially supporting street children and children affected by poverty to be able to attend school.

But part of me is starting to question this idea - maybe it would be better for the children to just GIVE the pepparkakor to the passers-by - not only would it give us the chance to make the children more visible but it would also allow the children to actually SEE that their kindness would have a positive effect on others - they would be able to SEE the smiles and gratitude (I hope) - which in the long run might be a more useful tool for the children to acquire - the ability to understand the effects of their own kindness.
YES, I would much prefer the money to go to the children in Nepal - BUT this is much more abstract - the children there are far far away in a country these children are not familiar with - they, as yet, do not have full comprehension that other children can be in situations where they have no homes or food - AND they would not be able to see the effect their actions would have in a direct and concrete way.

SO, maybe, just maybe,  handing out pepparkakor for free as a symbol of kindness might just have a bigger effect on the children in their skills of showing their empathy and life-long kindness.
It will be a case of talking with the children in Vinden and seeing what they think.
There IS a huge fascination for money - it IS a part of the grown-up world, so I totally understand it's attraction. BUT, really, we need to be helping the adults of the future to understand that life should not revolve around money - that it should be just a small part of our society and that our gestures and generosity with time, kindness and our actions ought to weigh much more!

As our investigations into empathy goes deeper, I will share thoughts and activites - I also have loads of notes from our meetings/discussions on empathy that I would love to share with you at some point... just need more days in the week!

So far 60 children have been given the opportunity to attend school at Southwestern State School/FilosofiskaSchool (facebook page)- but with more donations more children can be helped (if you are interested in helping you can go to Filosofiska Facebook page where there is information or Filosofiska's homepage where there is information about donations - at the moment the majority of the information is in Swedish)
Posted by Suzanne Axelsson - Interaction Imagination at 16:41

Email ThisBlogThis!Share to TwitterShare to FacebookShare to Pinterest
Labels: Empathy